The story was first published in Nash’s Magazine (illustrated by James Montgomery Flagg), MacLean’s Magazine and Hearst’s International, June 1924. Few alterations were made when it was collected in Debits and Credits (1926): Gillette is spelt Gillett, Hackman has become Packman. It would also be included in The Complete Stalky & Co. (1929), along with “Regulus” (A Diversity of Creatures, 1917); “Stalky” (Land and Sea Tales, 1923), “The Propagation of Knowledge” (Debits and Credits) and the previously uncollected “The Satisfaction of a Gentleman.” In the Sussex and Burwash editions, it is in the Stalky & Co. volume. In all these collections, it is accompanied by the poems
“To the Companions” and “The Centaurs”. 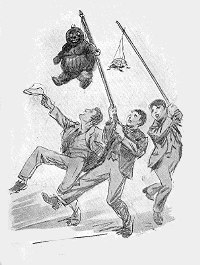 At the atypical boys’ boarding school previously described in Stalky & Co., Brownell has been hired as temporary replacement for a maths master who has had an accident. He criticises the school’s discipline as dangerously lax, arguing that the seniors’ permission to smoke will lead to other things, including (it is implied) homosexuality. That term, the boys form a craze for Joel Chandler Harris’s stories of Brer Rabbit and Brer Fox in his humorous book Uncle Remus One party acquire a tortoise as “Brer Terrapin,” suspend it from a pole as a totem, and march around holding it aloft as a banner. Stalky, McTurk and Beetle create a rival “Tar Baby” totem, and the school divides between the two, like warring tribes. Due to bad weather, they are short of exercise, and a gang fight spreads, causing much damage to school property. The regular masters resent Brownell’s comments on the “obscenity” and dangerous tendencies showed by this. He quarrels with them and resigns. Stalky welcomes the return of his usual maths master as by far the better teacher.

The setting and most of the characters had already been established in Stalky & Co. (1899), an exaggerated version of Kipling’s own old school. (For a non-fiction account, see “An English School” in Land and Sea Tales for Scouts and Guides).

On 6 December 1895 (a year before he began to write the ‘Stalky’ series), Kipling had written to Joel Chandler Harris, saying: “I wonder if you could realize how Uncle Remus his sayings and the sayings of the noble beasties ran like wild fire through an English public school when I was about fifteen. We used to go to battle (with boots and bolsters and such like) against those whom we did not love, to the tune of Hi yi! – tungalee: I eat um pea I pick um pea etc. and I remember the bodily heaving into a furze-bush of a young fag solely because his nickname had been ‘Rabbit’ before the tales invaded the school and – well, we assumed that he ought to have been ‘born an’ bred in a briar-patch’ and gorze [sic] was the most efficient substitute.”

Harris’s book was first published in the United States in 1880, and in England, as Uncle Remus: Mr. Fox, Mr. Rabbit, and Mr. Terrapin in 1881. ORG comments: “There were several sequels, but this, the first collection of stories told by the old Negro to the little boy, contains all the most universally known adventures of Brer Rabbit and his companions.”

The interloper Brownell is a new character in the Stalky series; ORG suggests he is “obviously there as a mouthpiece.” His aggressive manner and rigid ideas suggest an inner conflict, and his obsessive suspicions give a hint of what that might have been. When Kipling was at school, homosexuality was not yet illegal, but it was forbidden by the Church. The constant comparison of the boys’ play-fights to religious wars forms a background to Brownell’s character. The arrogance that can underlie extreme forms of religious morality is often shown up by Kipling: see, for example, the chaplain’s wife in “Lispeth” in Plain Tales from the Hills, and, later in Debits and Credits “The Prophet and the Country” and the poem “We and They.” It is clear that he preferred more relaxed, less repressive forms of religion, as practised by Gillett, the freemasons in “In the Interests of the Brethren” and the Benedictine monks in “The Eye of Allah.”

Christopher Morley (see note on “To the Companions”) called the story “perhaps the charmingest tribute of love ever paid to an American sanctity – Uncle Remus.” J.M.S. Tompkins, quoting “To the Companions”, argued that this and the other late Stalky stories were more realistic than the original series, since the “’unforgotten innocent enormities’ are seen for what they really were, and masters and boys restored to their true stature. The boys that swarm through the pages act and speak with complete credibility … the whole lively, grubby, noisy community is there, with the masters irritated, supercilious, mutually intolerant, yet possessed by the unreasonable ‘caring’ of the teacher for the pupil… The ‘level beams’ of eventide do indeed show more truth than the midday sun had done, a truth of exact and humorous recognition.”