This light-hearted poem, listed in ORG as No 786, was first published in December 1902 in Country Life in America and in the New York Tribune. It is dated 1893 in the collected editions. However, there is a reference in Carrie Kipling’s diary for February 2nd 1895 to “verses about Pan in Vermont” which suggests that the poem was just completed or still in the making at that time. However, it was not included in The Seven Seas in 1896.

The poem is set in Vermont as the snowdrifts melt and the temperature rises just above freezing. After the snow and ice of winter, spring is coming and the agent comes stylishly booted, with his catalogues of plants and seeds for sale. He is like Pan, charming his hearers with sweet songs, and the Poet welcomes him with enthusiasm, though one might call this the triumph of Hope over Experience. In the Kiplings’ recollections of earlier years, these are false promises, but there is still hope as new little flowers are revealed beneath the snow.

The piece has a wealth of references to Greek mythology, which would have made it largely impenetrable to readers who lacked a classical education or a classical encyclopedia. The mythology would certainly have puzzled many of his former neighbours in Brattleboro, though they – and the readers of Country Life in America – might well have agreed with him about the perils of seed catalogues.

The Kiplings had arrived in Vermont in August 1892 at the end of their honeymoon, and lived in a small cottage, rented for £2 a month , where Rudyard wrote furiously to recoup their fortunes after a bank collapse. There were two or three feet of snow under the windows as he began to write the jungle stories. They moved into their new house Naulakha the following summer. The winters in Vermont are very severe, and at the outset of their honeymoon in February 1892, the temperature was thirty degrees below zero, and they travelled by sleigh from the station, to Rudyard’s delight. (See “In Sight of Monadnock” in Letters of Travel 1892-1913 p. 5)

In February 1893, Carrie’s diary recorded deep snow. When the snow melts and the Spring comes it is wet and muddy everywhere, but this is when the agents come with their tempting illustrated catalogues full of promise for bright summer flowers. In February 1895, when the poem is mentioned in Carrie’s diary, possibly by Kipling himself, they were nearing the end of their third Vermont winter. They must have been more aware than hitherto of the hazards of gardening in the hills of Vermont, though as Andrew Lycett notes (p. 261) Rudyard corresponded in friendly fashion with a Boston seed firm, ordering roses, hollyhocks, peonies, zinnias and marigolds.

He also greatly enjoyed the wild flowers in the fields and woods around him, as he recalled in “Leaves from a winter notebook”. (Letters of Travel p. 102).

He relished the Vermont winters, as do most Vermonters, keeping the house warm with a furnace in the basement. Later, back in England, where there is less snow and ice, but a good deal of grey wet chilly weather, he was much less comfortable, and in the winter months the Kiplings frequently took refuge in South Africa from the cold and damp of Bateman’s. This Editor once spent some hours at Bateman’s one November helping to arrange an exhibition. The only room warm enough to sit in was the kitchen, alongside the Aga cooker.

See also “Naulakha after Kipling” by Mike Kipling, “A Visit to Rudyard Kipling’s Naulakha” by Louis Sander, Something of Myself Chapter V , and Rudyard Kipling in Vermont by Stuart Murray.

forty in the shade This figure is on the Fahrenheit scale, in which 32° is zero. The Centigrade equivalent is 4.4°, still quite a wintry temperature.

spouting eaves Water pouring from the overhanging part of a roof over the walls of a building. Strictly the eaves would not ‘spout’ especially if there are gutters.

hub the centre of a wheel 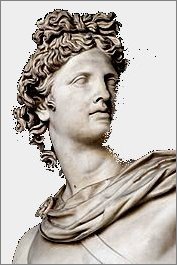 Apollo (left) The Sun God in Greek mythology. Also the god of poetry and the arts.

Zodiac The broad path of the sun, moon, and planets in an arc across the sky. The twelve constellations of stars along it, through which the planets pass, have been given particular characteristics by astrologers.

These have been thought by some to influence the lives of men and women on earth. See “A Doctor of Medicine” in Rewards and Fairies and “The Children of the Zodiac” in Many Inventions.. 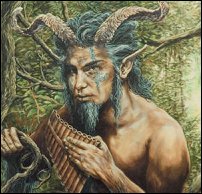 Pan in Ancient Greek mythology was the companion and sometimes pursuer of the nymphs, the god of wild shepherds, flocks and herds, and rustic music.

He is a disturbing figure, with the hindquarters, legs, and horns of a goat, like a faun or satyr. He is also the god of fields, groves, and wooded glens.

He is associated with fertility and the season of spring. The Romans called him Faunus. See also verse 14 of “The Land”.

On the road in this context a commercial traveller calling on his customers to sell his firm’s products. Known as a ‘drummer’ in the United States

house in this context a commercial company.

Gee & Tellus  The jest is that gee  transliterates the Greek γῆ,  earth, and tellus is a Latin word for ‘earth’. (erra” is more common than tellus, but the latter is more common when earth is thought of as a goddess). [D.H.]

Zeus the sky and thunder God of the ancient Greeks. He rules the gods on Mount Olympus. His Roman equivalent is Jupiter and his powers resemble those of Odin and Thor in Norse mythology.

livery in this context a stable which hires out horses and vehicles, much like today’s self-drive car-hire.

Apis an ancient Egyptian sacred bull, and the name of “The Bull that Thought” in Debits and Credits.

pine any conifer in the genus Pinus.

Pithys In ancient Greek mythology, ‘Pitys’ was a nymph, pursued by Pan, who was turned into a pine tree so as to escape him.

Hermes the messenger of the gods.

Boston The capital and largest city of the Commonwealth of Massachusetts, founded in 1630, a high-class place for New Englanders. The ‘so-Boston’ boot may suggest a fashionable and expensive shop. The traveller must have been a stylish dresser.

Maenads female worshippers of Bacchus, the Roman god of wine..

pipe and we pay an echo of the old saying, “He who pays the piper calls the tune” 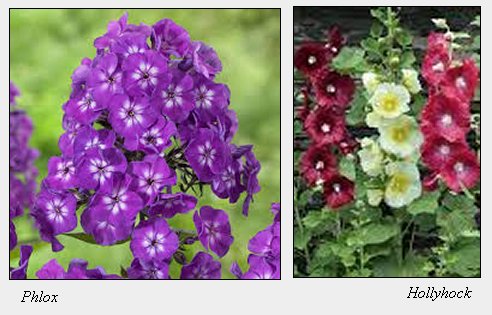 phlox ‘flame ‘in Greek, a large genus of flowering plants.

hollyhocks a plant of the Mallow family with large showy flowers..

ampelopsis commonly known as peppervine, a genus of climbing shrubs in the grape family Vitaceae (see below) The name is derived from the Ancient Greek ampelos, which means “vine”.

Eden Sword ‘He drove out the man, and at the east of the garden of Eden he placed the cherubim and a flaming sword that turned every way to guard the way. Genesis 3, 24.

Pomona the goddess of fruit trees. She is generally shown with a platter of fruit or a cornucopia, a large container shaped like a horn, brimming over with fruit and flowers (left).

Liber in this context the god of wine. A ‘libation’ was the pouring out of wine in honour of a god.

Lost Hesperides ‘Daughters of Evening’ in Greek mythology,
maidens who guarded the tree bearing golden apples that Gaea gave to
Hera at her marriage to Zeus, in a sacred garden in a far western corner
of the world.

It has also been told that the Lost Hesperides are beautiful lost islands. 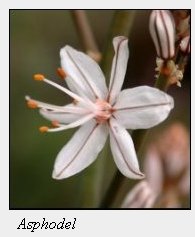 bays here signifying the wreath made from the leaves of a type of laurel given to a hero in ancient Rome.

Apples of gold In Norse mythology, the golden apples are the source of the gods’ immortality and perpetual youth; comparable to ambrosia in Greek mythology.

drifted pent usually ‘pent up’, contained, like the water behind a dam but here applied to snow.

Windsor a historic town in Vermont, where the Constitution of Vermont was adopted in 1777. This marked the founding of the Vermont Republic, which governed itself independently until 1791 when Vermont joined the United States.

Keene a city in North-West New Hampshire, the state which borders Vermont to the East.

Lake Champlain A large lake in the north of Vermont, 120 miles long, extending into New York State to the west and Quebec to the north across the Canadian border.

goat’s-hoof Pan has the body of a goat.

It is often called May-apple. It is also the name of the ship that took the Pilgrim Fathers to America in 1620.