First appeared in the October 1909 Delineator, then in the August 1910 Nash’s Magazine. Collected in 1910 in Rewards and Fairies in the two Macmillan Editions (to which the page and line references in this Guide refer) in which the two accompanying poems are “An Astrologer’s Song” and “Our Fathers of Old”. [The story is in Scribner’s Edition (Vol. 25); Burwash Edition (Vol. 13); and Sussex Edition (Vol.15)]

Puck comes bringing Nicholas Culpeper, the 17th century astrologer-herbalist, who tells Dan and Una how, during the Civil War, he succeeded in ridding their Sussex village of the plague, after discovering by means of astrology that its cause was an infestation of rats.

Background to the story

The story has affinities with “Marklake Witches” in Rewards and Fairies, 1910 (tuberculosis), and “Unprofessional” in Limits and Renewals, 1932 (a quasi-astrological treatment for cancer).

Kipling‘s interest in astrology and early herbals may date from as early as 1879 (when he was a schoolboy of 13) if the signature “J.R.Kipling 1879”, in a Victorian pocket edition of Culpeper’s Herbal which came to light in 2002, is genuine. His interest in medical matters is well documented; and in 1910 he sent his friend Sir William Osler (Regius Professor of Medicine at Oxford) a copy of Rewards and Fairies with a letter saying that Osler was responsible for his writing this story. 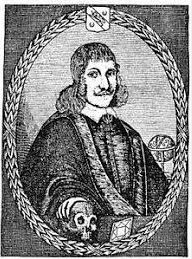 Nicholas Culpeper (1616-54) began studying divinity at Cambridge in 1632 [Kipling makes him frequently quote or allude to the Authorised Version of the Bible (1611).] He became fluent in Latin and Greek, but did not graduate, and in 1634 was bound apprentice to a London apothecary. He never qualified as a physician, but in 1640 set up in Spitalfields as a London apothecary (the nearest thing in those days to a general practitioner), calling himself “Student in Physick and Astrologie”.

On the outbreak of civil war in 1642 he supported the parliamentary side and in the course of a battle – probably while tending the wounded – received a chest wound from which he is thought to have contracted the tuberculosis of which he eventually died – hence the cough (aggravated by his being a heavy smoker) which Puck unfairly says is half put on as “a catch to trick the vulgar” [Page 254, line 5).

By translating into English their Latin Pharmacopoeia (1618) as A Physical Directory (1649), thereby infringing their monopoly, Culpeper gave grave offence to the College of Physitians, who spitefully referred to the book as “done (very filthily) into English by one Nicholas Culpeper” – in spite of which no less than 17 editions appeared by 1714. He wrote many other medical books, in particular his Semeiotica Uranica, or an Astronomicall Judgment of Diseases (1651) which, on the basis of Arabic and Greek medical and astrological writings, explained which planet caused which illness; and he was also a prolific translator of medical texts.

His best-known work is The English Physitian or an Astrologo-Physical Discourse of the Vulgar Herbs of this Nation (1652) – commonly known as Culpeper’s Herbal – “being a complete method of physic, whereby a man may preserve his body in health, or cure himself, being sick, for three pence charge, with such things only as grow in England, they being most fit for English bodies”.

The introductory Epistle to the Reader says:

Astrology is a very ancient system aimed at explaining what happens on earth by reference to the movements and positions of the heavenly bodies. It was not until the end of the 15th century that it began to be separated from astronomy and to lose its importance. Roger Lewis says the the story is meant to show off “intellectual canniness or charlatanism”; but Culpeper certainly had complete faith in his astrologico-medical method.

Bubonic plague (the “Black Death”) reached England from the East in 1348, being spread by rats. There were a number of outbreaks here in the 17th century, the last being the Great Plague of 1665-66 in which 70,000 people died. Culpeper could not have known that the connecting link between rats and human beings was the rat flea, since this was not discovered until the end of the 19th century: so the story is not founded on historical fact. It no doubt owes much to Kipling’s having read the Report of the Plague Commission in 1908, to which Osler may have drawn his attention.