The story was first published in The Windsor Magazine and McClure’s Magazine in March 1899, and subsequently collected in Stalky & Co. (1899) It was later included in The Complete Stalky & Co.

The Padre points out to Stalky & Co. that a small boy called ‘Clewer’ is being badly bullied, and asks them to do something about it. They have all been bullied in their time, so they know what is involved. They identify the bullies, Sefton and Campbell, two hulking senior boys, who have recently come to the school. 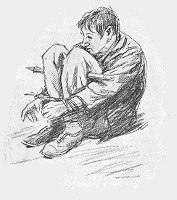 Stalky & Co. trick them into being trussed up for ‘cock-fighting’ (right). They then proceed to inflict on Sefton and Campbell, very brutally, all the tortures they have inflicted on Clewer. Before long the bullies give in, in tears, and promise to mend their ways. When the Head gets a letter of complaint from Sefton’s mother, he reflects that newcomers either educate the school, or – as in this case – the school educates them.