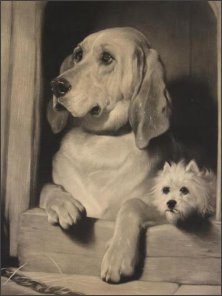 [Page 94, line 3] Baedeker travel guide books published by the German firm and named after them. [DP]

Consult the genius of the place in all;
That tells the waters or to rise, or fall;

[Page 94, lines 15 & 16] red daubed lingam the phallus, also called linga or shivalinga, is a symbol of the god Shiva or Siva. Red in Hinduism is the colour of the utmost significance, most often used on auspicious occasions such as marriage, birth and festivals.

The Lingam is defined in the Mewar Encylopaedia as the symbolic phallic male organ (penis) of the god Shiva, shown as an upright stone rounded at the top; worshipped in temples for its fertile reproductive power (Shiva being both the god of Destruction and Reproduction).
[DP]

[Page 95, line 5] chhatris mean umbrellas or canopies, usually dome-shaped. As recorded here, they are built on the cremation sites of wealthy or distinguished individuals.
See this site for examples.

[Page 95, line 24] English Mission to Jehangir this refers to the 1608 mission by William Hawkins who carried a letter from King James I to the Mughal Emperor. [James Tod in his Annals says it was an embassy from Queen Elizabeth I to Jehangir, but since Jehangir ruled from 1605 to 1627 whilst Queen Elizabeth I died in 1603 this was clearly an error].

The quotation from the Chaplain’s description of Chitor was almost certainly found by Kipling in Tod’s Annals where it is given as a footnote in Chapter XII. [DP]

[Page 96, line 15] ‘shadow of its beauty while it flourished in its pride’ quoted by Michael Myers Shoemaker in chapter III of his 1912 book Indian Pages and Pictures. Rajputana, Sikkim, the Punjab, and Kashmir … as a continuation of the quotation of the Chaplain’s description of Chitor (page 95, line 24 above.) He refers to Kipling’s descriptions in this chapter. The ORG found it to be reminiscent of passages in the Old Testament, including Psalms 80,10. [DP]

[Page 96, line 21] peepul (pipal) the Bo-tree—the perfect knowledge tree under which Gautama Buddha attained enlightenment. It is the ficus religiosa and is allied to the banyan.

[Page 97, line 8] Kumbha Rana’s Tower of Victory See the note to Chapter X, page 87, line 14 for more on Kumbha Rana. The Tower of Victory (Vijay Stambh) that Kumbha Rana built was considered by Colonel James Tod to be ‘superior to the Qutub Minar in Delhi in both design and execution.’ [DP]

[Page 97, line 31] the Wheel of the Law is used by both Buddhists and Jainists. The Wheel represents the endless cycle of birth, death, and rebirth. See Kim Ch. XIII, pp. 342-5.[DP]

[Page 99, line 17] Lord Dufferin the first Marquess of Dufferin and Ava (1826-1902) was Viceroy of India 1884-1888 after being Governor-General of Canada and Ambassador to Russia and Turkey, and also at Rome and Paris later. Lady Dufferin spent much of her time in India helping to provide medical treatment for Indian women. 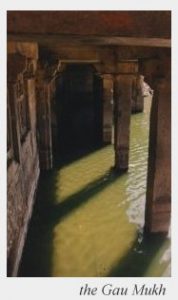 [Page 99, line 26 et seq] Gau-Mukh or Gomukh Kund. The Mewar Enclyclopaedia explains that this is:

a large, sacred pool in a deep cleft at the top of the fort’s western precipice; also called the Cow-Mouthed Reservoir and the Cow’s Mouth (Gao-mukh) Fountain. Because of many underground pockets of rainwater within the hill, there is a permanent supply of water for the fortress.

This subterranean water issues forth in springs in many places. At Gomukh Kund it flows out on the high western side of the hill near Mahasati Sthal (see chapter X, page 88, line 10), through the mouth of a cow, a man-made addition cut into the rock face. It falls on to a Shiva lingam, thence into a man-made reservoir on the very edge of the precipice. Hindus consider this reservoir as a sacred tank and bathe there. Often, small fish are to be seen in the water, and are fed by visitors. The excess water of this tank, especially during the rainy season, falls down the cliff, the waterfall being called Jharna. [DP]

[Page 101, lines 2 to 4] a passage led to . . . The Mewar Encyclopaedia describes the history of this passage:

On one side (of the Gomukh Kund) is a tunnel, Rani-bhandar, which allegedly led from Kumbha’s Palace to suites of chambers in the rock and the clearing above, the Mahasati Sthal. This was the scene of horrible jauhar (johur) which pre-climaxed Chitor’s three sackings (1303, 1534 and 1568).

On the first occasion, it is thought that the fort’s queens and other women and children used the tunnel to reach the Gomukh Kund to purify their bodies in its waters, before going to the nearby cremation ground. There they sacrificed themselves on large bonfires, rather than be taken by the enemy. However, following the 1303 siege, the cavern’s entrance was closed.

[Page 102, line 8] choke-damp also known as ‘black damp’ and ‘stythe’, it is a mixture of carbon-dioxide and nitrogen and is the result of the absorption of the oxygen in the air by the coal substance in the mine and the formation of carbon-dioxide in the process; it is also produced by the decay of timber, the breathing of men and animals, the burning of lamps and handles and the firing of explosive.

[Page 102, line 19] Hathi Kund Elephant Tank, to the south-west of the Gomukh Kund where the elephants used to drink. [DP]

[Page 103, line 21] And up into the sounding halls he passed . . . two lines from Lord Tennyson’s The Holy Grail, but not quite accurately quoted. Kipling tended to quote from his capacious memory for words and phrases, which occasionally let him down over small details. On his travels he would not have had access to his sources.