Published in Echoes by Two Writers in Lahore in August 1884. A parody of Emerson. Listed in ORG as No 114.

Collected, with the sub-heading (Emerson) in

The poem, in the words of Andrew Rutherford, ‘makes fun of Emerson’s sense of the oneness of the Universe. and the Interpenetration of Spirir and Nature.’ It salutes the deep origins of the poet’s clothing, his boots, his walking-stick, his tie-pin, his scarf, his cap, his trousers, his belt, his shirt.

Kipling left United Services College in July 1882, where he had read widely and written copiously, determined to become a published poet. In October, at the age of sixteen, he became Assistant Editor of the Civil and Military Gazette in Lahore. See our notes on “A Vision of India” for an account of his experiences and state of mind at that time. 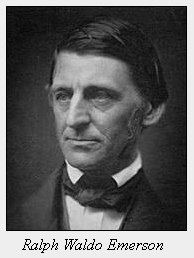 Ralph Waldo Emerson (1803-1882) was an American poet and essayist who led the transcendentalist movement of the nineteenth century. An important figure in American Romanticism, he was a champion of individualism and a critic of the pressures of society on people.

Kipling had discovered Emerson’s poems by the age of twelve (Something of Myself p. 20) , and they remained a strong influence on him throughout his life.

See Ann Weygandt (pp. 149-150) on echoes of Emerson in many of his later works, and on his Emersonian parodies, which she sees as ‘burlesques done for the joy of writing.’

It reproduces many of Emerson’s mannerisms, pokes none-too-subtle fun at his doctrine of the unity of all things, and makes its object unmistakable by mentioning Alphonso and Brahma. Had Emerson’s sense of humour failed him, as it sometimes did, he might have written such a couplet as:

All the gnomes of under-earth
Travailed at my tie-pin’s birth.

But Kipling undoubtedly took Emerson seriously. He was particularly devoted to his poem on Monadnock, the mountain in New England which stood scross from Naulakha, the house the Kiplings built in Vermont in 1893. In the first of his Letters of Travel, From Tideway to Tideway (1892) he writes:

You know how it often happens that a word shuttles in and out of many years, waking all sorts of incongruous associations. I had met Monadnock on paper in a shameless parody of Emerson’s style, before ever style or verse had interest for me. But the word stuck because of a rhyme, in which one was:

Later the same word … led me to and through Emerson, up to his poem on the peak itself—the wise old giant ‘busy with his sky affairs,’ who makes us sane and sober and free from little things if we trust him. So Monadnock came to mean everything that was helpful, healing, and full of quiet, and when I saw him half across New Hampshire he did not fail. In that utter stillness a hemlock bough, overweighted with snow, came down a foot or two with a tired little sigh; the snow slid off and the little branch flew nodding back to its fellows.
[Letters of Travel 1892-1913 p. 13]

[Title] Kopra-Brahm Koppra means ‘clothes’, and Brahm was the supreme god in Hindu belief, an impersonal spiritual being pervading everything. Hence Kopra-Brahm is the Supreme Deity of clothes.

[line 1] Cawnpore (now Kanpur) was an important industrial centre, with its woollen mills and boot-factory. It was also a major garrison town for the East India Company, famous for the siege in the Sepoy rebellion of 1857.

[line 3] gnomes mythical beings reputed to live underground and look after the treasures of the earth. They had a sinister reputation as stealers of babies and misleaders of travellers. 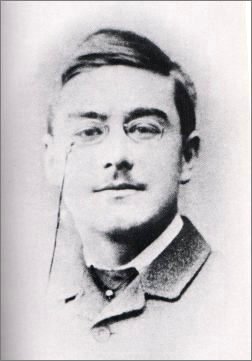 [line 4] tie-pin a large pin, sometimes enhanced with a jewel, which secured a gentleman’s tie. If you look closely you can see that the young Kipling is wearing a modest tie-pin in this picture.

[line 5] Myriad dryads Very many spirits of the trees.

[line 10] paletot an overcoat made from wool.

[line 11] silkworm the larva or caterpillar of the domesticated silk moth, (Bombyx mori: “silkworm of the mulberry tree” in Latin), for many centuries the source of silk.

[line 13] Atropos oldest of the the Three Fates, she ended the life of mortals by cutting their thread with her shears. She worked with her two sisters,
Clotho who spun the thread, and Lachesis who measured the length.

[line 15] Alphonso This was Alfonso the Wise, King of Castile in the Thirteenth Century, of whom Emerson wrote a poem – “Alphonso of Castile” – reflecting on the frustrations and illusions of earthly power.

A correspondent in Spain, Carlos Sanchez, has pointed out that Emerson – and Kipling who followed him – was profoundly incorrect in spelling the wise King’s name with ‘ph’ rather than ‘f”.

[line 26] Zeus The King of the Gods in ancient Greek mythoilogy.