This ballad was first published in Macmillan’s Magazine for February 1890, then
in the New York Tribune . It was credited to ”Yussuf”, Kipling’s first and unused Christian name which he often used as a nom-de-plume in his young days in India and London. The poem is collected in:

This, like “The Ballad of the King’s Mercy”, is a tale of cruelty. A young man, keen to win the favour of the King, brings him vague rumours of foreign invasion. He is ordered to stay up in the branches of a peach tree until he sees the enemy coming. Below are bayonets, and after a few days he falls to his death. The ‘jest’ thus brings about the unnecessary death of a foolish young man; in the other ballad the ‘mercy’ lies in permitting a man to die after he has suffered dreadful torture.

`
….two powerful but neglected poems … From these we see that those who suffer terrible punishment are not the open enemies of authority, but those who seek to please the King too much, or talk too much, or carry out too easily his cruel commands, or over-flatter him. Everything and everybody in a world poised on the edge of chaos is suspect, most of all those who are too pliable, who try too hard, the weak links.

Wilson then quotes lines 56-61, and continues:

This young man seeks to please the Amir by collecting tales of Russian invasion and of sedition to warn him. And for his pains, he is tied (sic) to a peach tree surrounded by bayonets on the ground below, that he may give warning of the Russian invasion he preached too often.

Lines 102-109 are quoted to complete the reference.

Harry Ricketts (page 147) tells how the publication of this poem in Macmillsn’s Magazine in 1890:

….marked the beginning of a spate of Kipling’s poems and short stories in the magazine over the following year including “The Ballad of East and West”, “The Head of the District” etc.

Birkenhead discusses Barrack-Room Ballads generally in his Chapter IX ‘London Conquered’ and describes how Henley, the Editor of the Scots Observer introduced the series to the public (p. 119).

Charles Allen writes of Kipling’s arrival in England (Chapter 11, “London and Fame”) describing how he was received into the literary world, taken to the Saville Club where he met Hardy and Besant, and introduced by the latter to A. P. Watt the literary agent, who doubled his income in a month or so. See our notes on “The Rhyme of the Three Captaians. .

Cornell (p. 146) writes of Kipling’s early days on the Pioneer of Allahabad.

His trip to Rawal Pindi in 1885, with its glimpse of the court of Abdurrahman, the Afghan Amir, resulted five years later, in two grim poems, “The Ballad of the King’s Mercy” and “The Ballad of the King’s Jest”. But it was not until the end of 1887 that Kipling was given his first real chance to form an opinion of the India of rajahs, elephants, and palaces. In November he was sent by the Pioneer on a railway journey through the native states of Rajputana in order to write up his impressions in a series of informal travel essays.

The native States … were bound by separate treaties to submit their external affairs to the will of the Indian Government, but, so long as their rulers remained at peace with their neighbours and kept their own tyranny and corruption within limits, they were allowed to regulate their internal affairs as they pleased.

Abdur Rahman Khan (the spelling varies) c. 1842-1901), Emir of Afghanistan from 1880 to 1901, was the. third son of Afzul Khan, and grandson of Dost Mohammad Khan. He was considered to be a strong ruler, who re-established the writ of the Afghan government in Kabul after the second Anglo-Afghan war.

This background is also reflected in Plain Tales from the Hills, The Naulahka and other Indian prose and verse.

[Line 2] kafilas A footnote translates this as “caravans” which in this era comprised trains of horses, camels and other beasts of burden laden with goods for sale or trade. See “The Man who would be King” Wee Willie Winkie p. 216. for one forming up, “The Ballad of East and West” (line 82), and Hobson-Jobson (p. 161).

At dusk he harries the Abazai – at dawn he is into Bonair,
“But he must go by Fort Bukloh to his own place to fare.

[Line 3] frails sacks or baskets woven from straw or grasses.

[Line 4] bales bundles of goods sewn up in sacking.

“Belike they will raise thee to Ressaldar when I am hanged in Peshawur! ”

[Line 7] turquoise an opaque blue-green gem-stone found in Asia and in Mexico, much sought after as jewellery.

[Line 15] Persian pussy-cats a breed of beautiful long-haired cats from what is now Iran – much in demand as pets. Kipling explanains why cats and dogs do not get on with each other in “The Cat that Walked by Himself” in the Just So Stories. 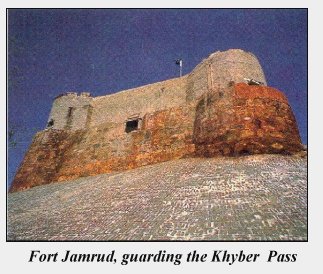 “At dusk he harries the Abazai – at dawn he is into Bonair,
“But he must go by Fort Bukloh to his own place to fare.

[Line 20] musk a perennial plant Mimilus moschatus with a characteristic odour, providing a substance which is also present in the glands of some animals, and is used as a basis of perfumes.

[Line 25] Mahbub Ali an Afghan horse-dealer and secret agent of this name plays an important part in Kim. Characters of the same name appear in “Dray Wara Yow Dee” in Soldiers Three, and “The Writing of Yakub Khan” in The Smith Administration (From Sea to Sea Volume 2). See also KJ 226/35 and KJ 327/10.

[Line 31] cinnamon stew a dish flavoured with spice made from the aromatic bark of the tree Cinnamomum zeylamicum. 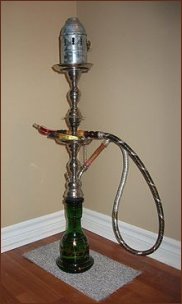 [Line 37] hookah the classic water-pipe of India and the East (right).

[Line 41] a Russian post in this context a small party of soldiers in a camp or fortification.

the Helmund a river rising in the Hindu Kush some 50 miles (80 km.) west of Kabul, running through the desert of Dashuti Margo to the Hamun-Helmand lake by the Afghan-Iranian border. British soldiers have recently (2010) been engaged in heavy fighting against the Taliban in Helmund Proovince.

ford a shallow part of a watercourse where travellers can cross – see “In Flood-Time” in Soldiers Three and “Ford o’Kabul River.”

[Line 55] Wali Dad See “On the City Wall” in Soldiers Three for a young man of the same name.

[Line 56] sire in this context father – usually applied to horses like the entries for ‘dam’ and ‘colt’ below.

Khattak (or Khatak) a Pashtun caste living in the Khyber Pukhtoonkhwa of Pakistan and along the Western bank of the River Indus. The historic capital is Akora Khattak, a town 31 miles (50 kilometres) east of Peshawar.

[Line 61] Kabul the capital and largest city of Afghanistan, located in the Kabul Province with a population of 2.8 million people in 2008. See Hobson-Jobson under ‘Cabul’, page 138..

[Line 69] sack in this context plunder.

[Line 74] durbar a Court or Levee – from the Persian darbdr; also the government of a native state – see Hobson-Jobson, page 331. 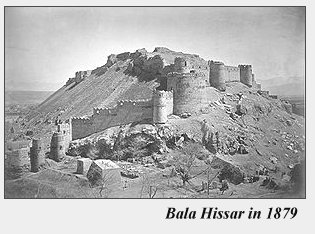 [Line 78] Gholam Hyder General Gholam Hyder Khan, one of the Amir of Afganistan’s generals, who took over the great fort of Bala Hissar from the British when they left Kabul in the Second Afghan war of 1878-1880.

[Line 93] van in this context the vanguard – the advance party, or first division of an army.

[Line 99] a score of bayonets twenty sword-like weapons for affixing to the muzzle of a rifle to form a spear.

[Line 105] mowed here meaning grimacing or making faces; he was crazy with pain and fear.

[Line 107] a bat a flying mammal in the order Chiroptera they, too, hang upside-down in caves and elsewhere.