Cornell (page 45.) describes the piece as:

An allegorical poem that he composed for the first English edition of Departmental Ditties (1890). It is called “The Galley Slave” and the galley is clearly India, with her wealth of goods and humanity, her constant threat of disease and death … Even the Anglo-Indians’ perpetual concern with the chance of another Mutiny is made part of the allegory….. Kipling strains his allegory to the limit as this slave, instead of concluding with a song in praise of his new-found freedom, looks back on his servitude with nostalgia and regret

Life was a voyage; the profession he embraced was like a ship’s routine; his farewell to India almost inevitably took the form of a ballad called “The Galley Slave.”

W.E.Henley, Editor of the Scots Observer and later a friend and admirer of Kipling, reviewed Departmental Ditties and Other Verses in his issue of 3 May, 1890, observing:

….all are good – “The Galley Slave” in especial, being almost good enough to vie with “The Ballad of East and West” for the place of honour in Mr. Kipling’s whole metrical achievement. In a sense too, it is typical of the writer. The rhythm is coarse, and the facture (workmanship: Ed.) is by no means irreproachable: but to read it without emotion is impossible. It is a man’s work, done for men; and it puts before you the feeling of the Anglo-Indian for the Indian Empire.
[see R L Green p. 58]

There is rather faint praise from Quiller-Couch in Reviews and Reminders II. “On Some Living English Poets”, in the English Illustrated Magazine, Volume X, p. 120 for September 1893:

Others may find more than facile vulgarity in Departmental Ditties. Having searched once and twice, I do not, save only the penultimate poem “The Galley Slave”, which really gave some promise of the splendid work to come.
[see R L Green p. 175]

Even in Departmental Ditties which may have a fillip of fun for jaded Anglo-Indians, though now they seem too precociously clever and not agreeably bitter-sweet, the solemn note was struck at least once in the finest poem in the collection, “The Galley Slave”.
[see R L Green p. 262]

He is exceptionally strong in allegory, a vein rarely touched of late, but which he has worked to purpose. “The Galley Slave” “The Three-Decker”, “The Truce of the Bear”….are notable examples. Neither Tennyson nor (as I think) Browning could write a good ballad, but Mr. Kipling can … ”The Bolivar,” “The Last Suttee” etc
[see R L Green p. 285]

Kipling was much attracted by sea-going metaphors for his work as a writer. See also in 1890 “The Rhyme of the Three Captains”, and in 1897 his Foreword to the Outward Bound Edition, echoed in 1935 in his Foreword to A Kipling Pageant. (These are collected in the Sussex Edition as “Two Forewords”.) In Something of Myself (p. 228) he writes:

… I dreamed for many years of building a veritable three-decker out of chosen and longstored timber-teak, green-heart, and ten-year-old oak knees—each curve melting deliciously into the next that the sea might nowhere meet resistance or weakness; the whole suggesting motion even when, her great sails for the moment furled, she lay in some needed haven—a vessel ballasted on ingots of pure research and knowledge, roomy, fitted with delicate cabinet-work below-decks, painted, carved, gilt and wreathed the length of her, from her blazing stern-galleries outlined by bronzy palm-trunks, to her rampant figure-head—an East Indiaman worthy to lie alongside The Cloister and the Hearth.

Not being able to do this, I dismissed the ambition as ‘beneath the thinking mind.’ So does a half-blind man dismiss shooting and golf.

[Title] ‘Galley’ can be defined in several ways, as a vessel propelled by oars and sail, as an oblong tray to contain type to produce a ‘galley-proof for correction before printing; and as the kitchen in a ship. 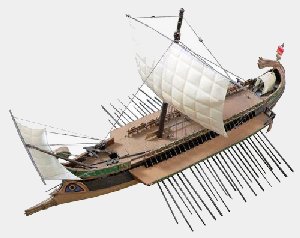 The galley as a sea-going vessel, dating from about 3000 B.C., was the fighting ship of the Mediterranean, with a bank of oars which later developed into two banls in biremes and three in triremes, and so on. Though they were only suitable for calm waters, fighting galleys were still in use in the late eighteenth century.

The play on words here is between the first and second definitions above. Kipling likens the work of the administrators and his own work on newspapers, in the heat and dust of India, to the hard unremitting labour of a galley-slave.

He was much concerned with the laborious task of correcting ‘galley-proofs’, as he recalls in Something of Myself p. 43:

Our native compositors ‘followed copy’ without knowing one word of English. Hence glorious and at times obscene misprints. Our proof-readers (sometimes we had a brace of them) drank, which was expected, but systematic and prolonged D.T. (delirium tremens) on their part gave me more than my share of their work.

See also “The Finest Story in the World” in Many Inventions. in which Charlie Mears has been a galley-slave in a previous life, and the linked poem > “Song of the Galley-slaves” Galleys also figure in “The Manner of Men” in (Limits and Renewals).

steering-wheel Wheels were actually not introduced until about 1710 (The Oxford Companion to Ships and the Sea, p. 938) but this seems legitimate poetic licence.

figurehead an ornamental stature or emblem fixed to the bow of a vessel. They disappeared from the larger ships of the Royal Navy in 1894 but lingered on in smaller craft until 1914.

beak in this context a strengthened part of the bow protruding just below or on the waterline for sinking enemy vessels by ramming. Beaks disappeared from the Royal Navy in about 1910; see “Beaking in a Gale” in Chapter V of A Fleet in Being.

leg-bar an iron collar round the ankle, chained to the bench on which the rower sat. In “The Finest Story in the World” Kipling writes of a mutiny:

An overseer on the lower deck slipped from the centre plank and fell among the rowers. They choked him to death against the side of the ship with their chained hands quite quietly, and it was too dark for the other overseer to see what had happened. When he asked, he was pulled down too and choked, and the lower deck fought their way up deck by deck, with the pieces of the broken benches banging behind ’em. How they howled!’

stepped the lower end of a mast is housed in a square block of timber or metal. secured to the ‘keelson’, the heavy spar that fastens the ship’s timbers to the keel. It was the custom once to place a gold coin in the hole before stepping the mast.

niggers a disrespectful term for black people not now acceptable. This is a hint of the fear of another Sepoy Rebellion mentioned by Cornell above.

hold a compartment in a vessel where cargo is stowed.

sweep-head the inboard portion of a sweep
(a large oar) which is gripped by the oarsman.

yawed ‘yaw’ has several definitions but means to deviate from the desired course for one reason or another, what a motorist would call a swerve.

sheered another word with several meanings but here also signifying a swerve.

Was it storm? Probably another reference to the Sepoy Rebellion – see Cornell above and “The Veterans” (1907) which commemorates the 50th anniversary of the terrible events of 1857.

beating this probably refers to the rhythmic beat of the oars rather than ‘beating to windward’ under sail, which was not possible for a galley.

the brand upon my shoulder It is said that galley-slaves were often branded with a red-hot iron.

times and seasons an echo of Ecclesiastes 3,1: ‘ To every thing there is a season, and a time to every purpose under the heaven.’

the rollers of the North rollers in this context are waves breaking on the shore, another reference to the Sepoy Rebellion which began in Meerut in Northern India in 1857.

a craven-hearted pilot A ‘pilot’ is an experienced seaman with expert local knowledge who takes vessels in and out of harbours etc. (See “An Unqualified Pilot” in Land and Sea Tales.). Kipling is presumably referring to a senior official or officer whose nerve failed him in the crisis of 1857.

half-mast signal the ensign at half-mast signifies the recent death of a member of the crew or someone known to them. Kipling may be confusing it with the hoisting of the national colours upside-down as a signal of distress.

orlop the lowest deck in a vessel.

bench the seat for the rowers.

hale robust, as in the expression ‘hale and hearty.’

cot a poetic term for cottage

lazaretto or ‘lazarette’. Two meanings; a compartment for the stowage of valuable stores in a ship, or an isolation-hospital for infections or contagious diseases.

raffle in this context probably a tangles mass of cordage or other wreckage.

top-men particularly active and intelligent members of the crew sent aloft to handle sails and rigging.