First published in the Windsor Magazine for February 1895, and collected in Land and Sea Tales in 1923, where it is followed by the verse “The Junk and the Dhow” . See also the Sussex Edition Volume 16 page 54, the Burwash Edition Volume14, and Scribner’s Edition Volume 35.

Various editions of Land and Sea Tales are available from Amazon in hardback and paperback. 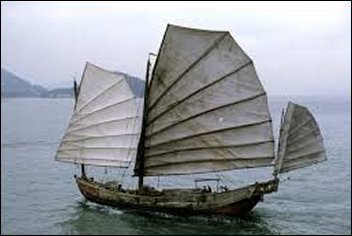 Jim Trevor’s father is an experienced pilot, guiding ships up and down one of the most dangerous rivers in the world, the Hugli. The Hugli runs swiftly down from Calcutta into the Bay of Bengal, through constantly shifting shoals and mudbanks which can capsize and swallow a big ship in minutes. Jim, aged fourteen, is desperate to become a pilot himself, and spends all his time on the water and in the harbours, making friends among the men who know the river, and storing away precious information. His father does not encourage him, and wants him to become a clerk in an office.

One day the skipper of a Chinese junk, unwilling to pay the high charges for pilotage, asks Jim to take his craft down the river. He agrees, entirely illegally, and navigates the shoals by following his father, who is taking a big steamer down. At the mouth of the river he is paid off in triumph, but is caught by his father. He gets a thrashing, but his father accepts the inevitable, and apprentices Jim to another pilot. He is on his way.

John Crookshank, writing in the Kipling Journal of September 2003, comments:

An interesting example of Kipling’s skill in reworking a subject at different
times and for different markets can be seen by comparing “On
the Banks of the Hugli”, Chapter IV of The City of Dreadful Night published
in 1888 as one of the Indian Railway Library green covered
paperbacks, with his story “An Unqualified Pilot”, one of the brilliant
little tales in Land and Sea Tales for Scouts and Guides…

Both these typically descriptive and perceptive pieces are Kipling
at his very best and both evoke the power and danger of the mighty
river and the skill of the pilots who brought shipping up to Calcutta. But
“An Unqualified Pilot”, being for young people, is written in a simpler
and tighter style than “On The Banks Of The Hugli”. Kipling was never
profligate with words but he pared his writing down even more carefully
as he got older. [KJ 307/17]

None of the other thirty-three commentators and biographers we consulted has noticed this story which is a pity, for as well as being a good example of Kipling in Young Man / Engine / Ship / makes good mode, it is an excellent and almost believable tale, based, as the opening line observes, on a real incident. It is unlikely, however, that a junk, or any vessel, for that matter, would have got very far without being stopped by the Port Authority, but it would be small-minded to disparage such a ripping yarn on a mere technicality ! .

See also “A Real Live City” [Calcutta] and “On the Banks of the Hughli” (sic) in From Sea to Sea, Volume 2); also “The City of Dreadful Night”, “The Song of the Cities”, and “A Tale of Two Cities”. 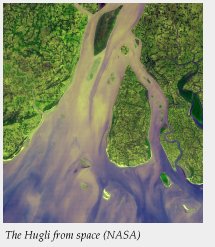 The Bay of Bengal Pilot, 10th Edition, 1978, published by the Hydrographer of the Navy, is a key source of information about the perils of navigating the Hugli. Ideally we would like to have had the Editions of 1887 or 1892 with contemporary charts, as some names have disappeared or changed, but the navigation is left to Jim Trevor – who has, with a mixture of good judgement and good fortune successfully negotiated a very dangerous river. Pilotage for the Hugli is compulsory and no vessel should navigate the river without one.