First published in Land and Sea Tales in 1923, where it follows and “An Unqualified Pilot”. It should be read in conjunction with that tale. It is also collected (with slight variations in the Sussex and Burwash Editions, Definitive Verse, Collected Verse, and The Works of Rudyard Kipling (Wordsworth Poetry Library) See also ORG, Verse, p. 5462.

[line 1] a stranded tree see “The First Sailor” in (A Book of Words), for another light-hearted account of the beginning of navigation.

[line 2] One-piecee stick-pidgin… this and other remarks in italics are a version of ‘Pidgin’ (or ‘Pigeon’) English which Hobson-Jobson (p. 709) defines as: ‘The vile jargon which forms the means of communication at the Chinese ports between Englishmen who do not speak Chinese (sic) and those Chinese with whom they are in the habit of communicating. The word business in this kind of talk appears to be corrupted into pigeon‘. They are more-or-less self-explanatory with—perhaps—a little imagination ! See also “An Unqualified Pilot” (Land and Sea Tales, p. 64 passim.) 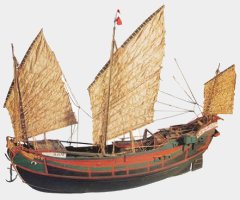 [line 7] Junk (left) The Junk is the classic sailing-vessel of the Eastern seas. 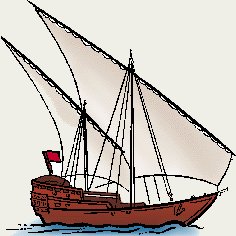 [line 7] Dhow The Dhow (right) is another early ocean-going sailing vessel used from Arabia and the East coast of Africa to the Indian Ocean.

See The Oxford Companion to Ships and the Sea, ed. Peter Kemp, (OUP, 1976) for fuller descriptions of these and other vessels mentioned below.

[line 11] tack in this context to bring a sailing-vessel head to wind and across it so to bring the wind on the opposite side so she can beat up to windward in a series of zig-zags.

[line 15] Grand Commander Noah In ancient times, Noah—the legendary first sailor—built the Ark to save mankind and the animals from the Flood. See Genesis 6, passim, and “The First Sailor” in A Book of Words.

Kipling used the image of an ark (‘r-k’) several times as a sort of signature in the drawings he made (right) for the Just So Stories. See also “A Truthful Song” in Rewards and Fairies.

[line 19] galliot at first a boat pulling up to twenty oars with a single mast and sail which the Dutch later developed into a trading vessel with leeboards to prevent too much ‘sideslip’.

[line 25] Confucian sea-board Confucius (551-479 B.C.) the celebrated Chinese sage whose teachings were followed in Imperial China – hence the sea-coast of that country.

[line 28] caravel a sailing vessel similar to those used by Columbus at the end of the 15th Century, here improved by the development of the watertight bulkhead which divides a vessel into several compartments.

[line 36] Amboyna an island in Indonesia.

[line 36] Great Australian Bight the enormous bay, a thousand miles across, on the south coast of Australia from Cape Arid to Adelaide.

[line 42] chanty (or shanty) Sailors’ song used when hauling away – usually with solo and chorus.

[line 46] Tarifa a city on the coast of Spain, near Gibraltar.

[line 46] Formosa The great island off the coast of China, now called Taiwan.

[line 47] Socotra an island in the entrance to the Gulf of Aden off southern Arabia.