ON THE FRONTIER OF CIVILISATION

[Page 9, lines 1-2] yellow grass The gas referred to must have been mustard gas, or yperite, which would have left the grass yellow. This was the earliest chemical used in the Great War, by the Germans.

[Page 9, lines 19-20] torpilleurs … trench-sweepers small mortars used to clear a trench before assault, which drop a missile down from a high trajectory. Also called “crapouillot” in slang. See also page 34, line 15 below.

[Page 11, line 27] Belial a fallen angel according to the Bible. 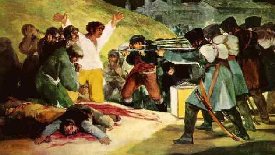 [Page 12, line 12] Goya Francisco Goya (1746-1828) the famous Spanish court painter. In his later years, after seeing some of the horrors of war, he painted very dark, desperate paintings.

[Page 21, line 9] Sadducee members of a traditionalist Jewish sect, active at the time of Christ, who rejected, among other beliefs, the idea of life after death. In this connection Kipling means ‘a sceptic’, hardened by the experience of questioning prisoners. 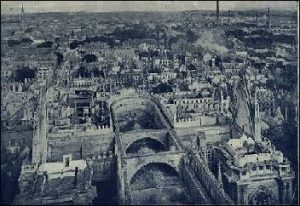 [Page 26, line 1] The tragedy of Rheims German shellfire during the opening engagements of the First World War burned, damaged and destroyed important parts of the great cathedral Notre Dame de Rheims. Scaffolding around the north tower caught fire, spreading the blaze to all parts of the timber superstructure.

The lead of the roofs melted and poured through the stone gargoyles. As one can see from this photograph (right), the cathedral was left as a roofless shell, open to the sky. Restoration began in 1919, but the cathedral was not fully reopened until 1938.

a Gothic cathedral a gargoyle (left) is a projecting spout, often carved into a fantastical shape.

Crockets are stone ornaments placed in rows along the roof ridges on pinnacles.

BATTLE SPECTACLE AND A REVIEW

[Page 30, line 7] a Maréchal des Logis or a Brigadier a Quartermaster-Sergeant or a Corporal in the Cavalry. 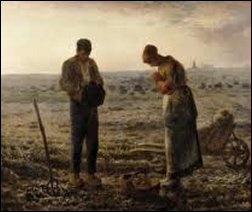 [Page 33, line 19] sallet a light head piece, with protection of the neck.

[Page 35, line 7] Tipperary The rousing march “It’s a Long Way to Tipperary” which became one of the most commonly sung soldiers’ songs of the War. Tipperary is a small town in the west of Ireland, which was indeed a long way from the Western Front.

[Page 35, line 14] reviewed a French Army Corps This review seems to have made a strong impression on Kipling, maybe because the handshake echoed an occasion when the King of Belgium reviewed the allied troops in August 1915.

[Page 35, line 22] Cadmus In ancient Greek legend he is said to have slain a dragon and sowed its teeth in the earth, from which sprang armed men bent on killing him; hence the phrase : ‘Cadmean victory’, ie one that leads to the victor’s ruin. However, he set the warriors fighting among themselves, and escaped to found the city of Thebes in Boeotia

[Page 39, line 19] jibbed like Lot’s wife Lot’s wife was allowed to escape the destruction of Sodom and Gomorrah, but could not refrain from looking back when fleeing, and was changed into a pillar of salt. See Genesis 19,26.

[Page 40, line 1] Mr Smith The sensational “Brides in the Bath” case of murder, when George Joseph Smith was found guilty of drowning three successive wives in bath-tubs bought specially for the purpose. He was hanged in Maidstone gaol in August 1915.

[Page 40, line 15] Fashoda An international incident in July 1898. Capitaine (or Commandant) Marchand led a French military party that had come all the way from the Congo to try and establish a connection between French West and East Africa by taking over the Sudan.

Kitchener, then sirdar (commander) of the Egyptian army, under the British, was trying to recover this territory which had been lost to the Sudanese under the fanatical religious leadership of the Mahdi, with the aim of establishing a corridor of British territory between South Africa and Egypt. This was the time of the ‘scramble for Africa’ by the European powers, which was fraught with possibilities for conflict between them.

The British had a whole army against about 150 men on the French side. French politics were dominated at the time by the Affaire Dreyfus, a political and military scandal involving an officer who had been falsely accused of treason. The French government took the wise decision to order Marchand to withdraw. The negotiation and its execution went well, thanks to the courtesy and moderation of the protagonists that allowed due time for all to be accomplished smoothly.

Kipling reports that at the review ‘they say’ that Kitchener, walking down the line, stopped to speak and shake hand with a General who had been Marchand’s Chief of Staff at Fashoda. In 1915 a public handshake and friendly talk in front of the troops was obviously intended to demonstrate that relations between the two countries were excellent.

[Page 40, line 22] anonymous letter-writing George Simmers writes: this refers to a scandal of the late nineties:

The one great scandal which stirred his court, eight years ago (and which found its last quietus only recently in the death of Baron Schrader, the traducer, as a consequence of a duel, on homicidal terms, with the traduced, Baron Kotze), met in no one a severer judge than in the Kaiser himself. I refer, of course, to the disgraceful ”anonymous letter affair,” in whose meshes for a time not only Countess Hohenau, one of the chief figures at the Berlin court, but even the brother of the Empress, Duke Günther of Schleswig-Holstein, were entangled. It was a case of such diabolical malice and petty meanness, and for several years so shrouded in mystery, that it led to the wildest suspicions and most sensational rumours. Yet it resolved itself in the end, when the full truth was established, to nothing worse than the cunningly devised intrigue of an envious and ambitious minor court official against his superior.
[Germany:The Welding of a World Power by Wolf von Schierbrand, 1905]

THE LAND THAT ENDURES

[Page 43, line 27] coveted by the Kaiser In 1914 Wilhelm II (right), Emperor of Germany since 1888, declared war on Russia on August 1st, on France on August 3rd, and on Belgium on August 4th. Kipling was on the borders of Alsace, a region seized by Germany after the Franco-Prussian War.

TRENCHES ON A MOUNTAINSIDE

[Page 52, line 1] Alan Breck Kipling recognized a distinct likeness to Robert Louis Stevenson’s dashing character in Kidnapped (1886) and Catriona (1893) in the Canadian who took charge of him for the rest of this tour.

[Page 53, line 1] Mussoorie One of the Hill stations for summer rest for Anglo-Indians, in the foothills of the Himalayas.

[Page 53, line 12] Jutogh a small British military station in the Hills in India, near Simla. 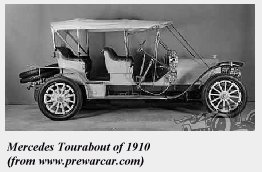 [Page 58, line 25] still as pig at noonday this refers to wild boar (using ‘pig’ as a slang name for ‘boar’) hunting in India. The boar would sleep in the heat of midday.

[Page 64, line 27] Aesir the collective name for the union of the Gods in Scandinavian mythology.

[Page 64, line 28] Fenris Wolf The giant wolf in Scandinavian mythology, aiming to destroy the world and checked by the Aesir.

[Page 71, line 10] Rabelais François Rabelais (1494-1553), celebrated French writer, prominent among the creators of the modern French language, known for his free use of the most realistic vocabulary and for his extraordinarily wide culture. In English the word ‘Rabelaisian’ is used to mean ‘extravagant’, ‘coarsely exuberant’. 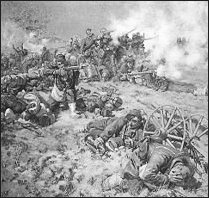 [Page 72, line 15] Germany in ’70 The Franco-Prussian War, often referred to in France as the 1870 War, followed an imprudent declaration of war on Prussia by Napoleon III of Frence. Prussia was backed by the North German Confederation, of which it was a member, and the South German states of Baden, Württemberg and Bavaria.

The complete Prussian and German victory brought about the final unification of the German Empire under King William I of Prussia. It also marked the downfall of Napoleon III and the end of the Second French Empire, which was replaced by the Third Republic. As part of the settlement, almost all of the territory of Alsace-Lorraine was taken by Prussia to become a part of Germany, which it retained until the end of World War I.