The full title of this booklet, published in England by Macmillans in 1898, and in U.S.A. in 1913 is A Fleet in Being: Notes of Two Trips with the Channel Squadron. First publication took the form of six articles in the Morning Post, a London newspaper (since merged in the Daily Telegraph) on 5th, 7th, 8th, 9th, 10th and 11th of November, 1898. The articles correspond with the chapters in the booklet, but the second part of the title was omitted.

In America, they first appeared in the World Sunday Edition in November and December, 1898. Kipling’s own journal, from which he condensed the articles, is believed to be in possession of the New York Public Library. The articles were collected as follows:
Sussex Edition, Volume XXVI, Page 478 (1938). Burwash Edition, Volume XX, Page 408 (1941). Scribner’s Edition did not include them. The first collected form in America was in 1913 in the Seven Seas Edition, Vol V. A few minor amendments were made and Kipling’s Notes added before the issue in booklet form. Our page and line numbers refer to the 1898 booklet. 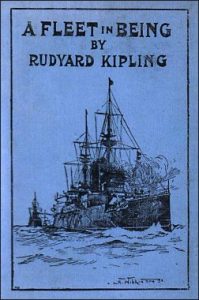 The drawing on the cover of the booklet shows a battleship of “the great Majestic class”, probably the Majestic herself, but the details are not quite clear enough to rule out the Magnificent. [Although the class of nine ships were officially identical, even when new there were subtle differences which would have distinguished one from another (e.g., the precise positioning of the cowls, clustered around the base of the funnels which admitted combustion air to the boiler-rooms. And if that were not sufficient (and at a distance it might well not be), the ships sported a ‘bar code’, one, two or three horizontal bars) on their funnels. Today’s books of reference indicate that this was introduced in the Channel Fleet in 1903, when the old black, white and buff paintwork gave way to grey.

However, Norman Wilkinson’s illustration on the cover of the 1898 edition clearly shows a ship with a single distinguishing band on her funnel. Unfortunately, there are no books of reference to confirm which ship this might have been. A.W.]

The artist, then a young man of 20, had a distinguished career. He became President of the Royal Institute of Painters in Water Colours, was well-known for his marine painting in both oils and water colour, and was awarded the C.B.E. In the 1914-18 War, he was responsible for the “dazzle-painting” of H. M. ships and merchantmen, to make them more difficult targets for U-boats. A number of his paintings, covering both World Wars, which he presented to the nation, may be seen in the Imperial War Museum in Lambeth, and the National Maritime Museum at Greenwich.

As Kipling says, it was a new world into which he stepped and it is hardly surprising that he fell into an occasional error. These, however, are of no great account. His interest in all that went on, his appreciation of men devoted to their profession, and his fresh, keen eye, raise the book well above mere journalism and give a valuable picture of the Royal Navy at an interesting stage in its development.

In contrast to ten years earlier, when the number and quality of the ships assembled for the Queen’s Golden Jubilee Naval Review had been a source of concern to those in a position to judge their real worth, in 1897 the Fleet was strong, up-to-date, and bent on using its new weapons effectively. Nonetheless, there was still a characteristically British and somehow engaging touch of amateurism in its methods and outlook. This was typified, perhaps, in the appearance of the ships themselves; they still had black hulls, a red or coppersheathed waterline, white upperworks and buff or ochre funnels and masts. Long-range gunnery and wireless were still in an experimental stage. (Wireless was first used on a large scale in the Manoeuvres of 1899, after which the First Lord was able to report that it worked well so long as it was confined to one ship at a time.) Cruisers, responsible direct to the senior Admiral and controllable only within visual signalling range, still enjoyed their last taste of the romantic independence of their forebear, the frigate, cf. Kipling’s poem “Cruisers”. A few years later they were being organised in squadrons under cruiser admirals, with a control greatly extended by wireless.

[In the paragraph above, Admiral Brock refers to late Victorian warships having a “coppersheathed waterline”. This was the literal truth, though it applied only to ships on tropical stations. The copper-sheathing of ships’ underwater hulls had commenced in the 1770s, with a view to reducing the fouling by weed, and preventing the depredations of the marine boring worm ‘teredo navalis’ – hence something which was copperbottomed was solid and reliable. When the first iron ships were built, it was found that an unprotected iron bottom grew weed and barnacles much faster than a copper bottom, and the Admiralty called a halt to iron shipbuilding in the 1840s until this, and other problems, had been sorted out. In the mid-1850s the first anti-fouling paints were introduced, but even then, ships needed to be docked at fairly frequent intervals to remove marine growth. In the ‘far-flung’ corners of the empire, dry docks were few and far between, so the battleship flagships of the China Station, and a number of cruisers, had their steel hulls below the waterline sheathed in teak, and then coppered in the old way. This endured until about 1903/4, when new dry-docks at Hong Kong came into use, and better anti-fouling paints were in use. A.W.]

Other changes were also just over the horizon. Amongst these were the challenge implicit in the German Navy Laws of 1898 and 1900, framed by Admiral Tirpitz and backed by Emperor Wilhelm II, and the far-reaching, if not invariably well-aimed, reforms of the Royal Navy tirelessly and relentlessly forced on by Admiral “Jackie” Fisher, the First Sea Lord from 1904 to 1910. These were to make life real and earnest indeed. Though it would have been surprised to know it, the Channel Squadron in 1897 was enjoying a comparatively peaceful interlude of assimilation and quiet evolution.

The title, “A Fleet in Being”, was borrowed by Kipling from the pages of British naval history, where it has a special significance dating back to 1690 when Lord Torrington, commanding William III’s naval force in the Channel, found himself facing a stronger French fleet. He proposed to avoid a set battle, except under very favourable conditions, until he could be reinforced. By thus keeping his fleet in being, he could maintain an active threat which would force the enemy to remain concentrated and so prevent him from taking the initiative elsewhere. (Sir Julian Corbett discusses this policy at some length in his book “Some Principles of Naval Strategy”, Chapter III, Section I). Kipling, of course, is using the phrase in a literal sense.

Though often called the Channel Fleet, which was natural enough in view of the number and variety of its ships, officially this force was the Channel Squadron, until June 1903, when for eighteen months it was a Fleet. In December, 1909, as part of a general reorganisation started by Admiral Sir John Fisher (First Sea Lord 20th October 1904 to January 1910), it became the Atlantic Fleet. At the same time the Home Fleet became the Channel Fleet.