First published in The Century Magazine for April 1914 as “The Dog Harvey” with illustrations by Reginald Birch (1856-1943) and in Nash’s and Pall Mall Magazine the next month as “The Dog Hervey”. See page 157 line 21 below. (The dog is called Harvey throughout the story).

The story is collected in A Diversity of Creatures (1917) accompanied by the verse “The Comforters”, and the Sussex Edition Volume IX page 135, the Burwash Edition Volume IX, Scribner’s Edition Volume VI page 155, Collected Dog Stories (1934) with illustrations by G L Stampa, and Mrs. Bathurst and Other Stories, edited by Lisa Lewis, (Oxford University Press, 1991). 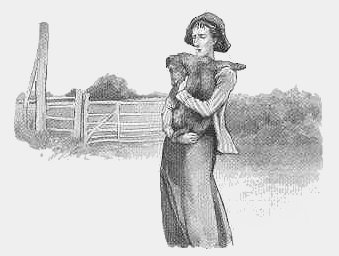 As Philip Mason explains in KJ 257, Moira Sichliffe, unmarried, in her thirty-fourth year, shy, ungainly and to most people unattractive, directs on to a terrier puppy, also ungainly and unattractive, which she calls ‘Harvey’, an obsessive love which she would really like to give to a particular man. She has not seen him for some years, but he had stood up for her once and been kind to her. She is immensely rich, because her father, a doctor, had specialised in looking after disturbed young men, whom he ‘patched up’, insured heavily in his own favour, and let out into the world again ‘with an appetite’ for alcohol or drugs, often to their deaths. The Narrator looks after Harvey for a time while he is recovering from distemper, and finds the dog’s squinting tortured gaze uncomfortably human.

Some months later the Narrator finds himself in Madeira, looking after friends who have been seriously ill. They meet a friendly and wealthy man, called Shend, who is untiringly kind to them, accommodates them on his steam yacht while they convalesce and wait for their passage home, and spares no effort to make them as comfortable as possible. 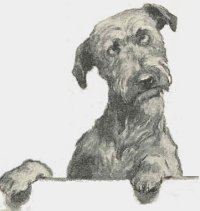 On the voyage home Shend reveals that he is an alcoholic, who – as it turns out – was once a patient of Moira’s father, and was the very man who had stood up for her years ago. He is suffering from the extreme effects of drink, and – in a part of the story which has always puzzled readers and critics – has hallucinations of a little squinting dog, which recognises the Narrator.

They reach England, where Moira and Shend meet, and will clearly spend the rest of their lives together. Harvey reverts to normal dogdom, and tumbles joyously into a fight with the Narrator’s dog. He is, in Kipling’s words, ‘…freed of all burden.’

This is generally agreed by the critics to be one of Kipling’s most difficult stories to understand.

A reviewer in The Times Literary Supplement for 19 April 1917 says:

In “The Dog Hervey” the real dog of a woman is the phantom dog of a man, and for a long time we regard it as a real dog and not as a shadow cast by the mind, we are too little attuned to the solution to accept it without cavil. We ask how the dog came to pass from the world of matter to the world of mind…

In his Chapter XIX Charles Carrington looks at this and other “difficult” stories, observing on page 469:

The cryptic and the obscure styles are combined in several stories and are carried to their greatest length in “The Dog Hervey” which presents more puzzles, the more it is examined; it abounds in literary, masonic, psychological, and canine clues which lead nowhere. Like “Mrs. Bathurst” (Traffics and Discoveries) (it) seems to have been made incomprehensible by ruthless cutting. Perhaps the themes of both are too complex for treatment within the confines of a short story.

Angus Wilson (p. 80) seeing portraits of some of some of Kipling’s friends in this and other stories, agrees with Carrington. He calls this one:

so confused that it might well have been better as a novel.

Seymour-Smith (p. 340) examines this tale at some length, maintaining that Moira Sichliffe is a witch, and claiming that she represents Kipling’s wife – an extraordinary and monstrous suggestion.

[In Greek mythology the Moirae were the Three Fates, Clotho, Lachesis and Atropos, who, between them, controlled the birth, life and death of everybody. They were usually described as cold, remorseless and unfeeling, and depicted as old crones or hags: Ed.]
C A Bodelsen, however (p. 123) comments that:

He takes the view (p. 97n.) that the miserable squinting dog in the story is not primarily a symbol:

It is part of the first level of the story, which is a piece of witchcraft. Miss Sichliffe projects her love for Shend— one of the lame ducks that her father turned into alcoholics, and the only person who ever showed her kindness and respect, into the animal, and by some process that remains obscure makes Shend see it in hallucinations, until in the end it leads him back to her and everything is well.

…in “The Dog Hervey” there are about thirty clues to the witchcraft theme.The difficulty is that most of Kipling’s clues are so inconspicuous, being disguised as descriptive details, or bits of quite natural conversation.

Philip Mason in KJ 257 agrees that witchcraft plays a key part in the story:

Moira was indeed a kind of witch, reciting no spells by moonlight,
but half-consciously directing her purpose to an end. Harvey was her
familiar: the witches of the Middle Ages usually had a cat or a toad as
a familiar. She must have talked to him about Shend, and put on him
a load too heavy to bear. Her directed intensity of purpose made him
go to the room where Shend had lived, and made him stare at the
Narrator. She perhaps had some degree of second sight, and knew
that the Narrator would play some part in her life: that is why she
talked to him as though he were going to send her a parcel, and why
Harvey stared at him.

Nor have I any doubt that she wanted his friendship. She wove him,
in a lesser role, into her unconscious, or only half conscious, spell.
And that is why she expected him to recognise her unspoken
quotation from Boswell. But I do not think she knew that Shend’s
yacht would be in harbour in Madeira when the Narrator was there.
That was what is called ‘chance’, though I do not think Kipling
believed in ‘chance’ any more than I do.

The desolate longing of a woman makes a vehicle for itself out of the little sickly dog she cherishes, and projects its wraith into the hallucinations of the drunkard, who years before was kind to her. This then is a tale of sorcery, of such a ‘sending’ as we might read of in a Northern folk-tale, or find paralleled in the beliefs of a savage people.

Edwin Houlton, in a most interesting article in KJ 202, ‘Who was the Dog Hervey’, after reading Tompkins, comments:

Love in Kipling is literally “glamour”—sorcery, primitive and alarming. It can work fearfully with “ordinary”, plain, middle-aged people —Shend and Moira, though rich and at the end happy, are in the same boat as Vickery, Mrs. Ashcroft, and Sergeant Godsoe. It is “Woman-work”—Shend runs away, Moira moves Heaven and Earth, and other Places, to clutch him back; there is another of her sort in “On The
Gate,” the old lady with a mottle-nosed Major in her grip, bullying
St. Peter to let him in. Moira will make a man out of Shend.

This Editor believes that, as in many of Kipling’s works, those who do not perceive any particular message can usually enjoy them as interesting stories and verse, though they may miss much fascinating material. See the remainder of Bodelsen’s Chapter VI “Kipling’s Late Manner”.