This is the light-hearted story of an engagement between HMS Clampherdown, a fictitious battleship of the Royal Navy and a light cruiser of “an ancient foe” – presumably the French – armed with a Hotchkiss gun. (There was, in fact. a real warship, named Camperdown, completed in July 1889, and the most modern battleship afloat when Kipling wrote these verses) .The enemy wins the long-range battle of the guns, but—when almost sinking—the crew of the Clampherdown close, board her, and win a famous victory hand-to-hand.

Kipling’s headnote (not published until the Definitive Edition in 1940) explains how the ballad was a skit, inspired by a letter in the St James’s Gazette, suggesting a return to boarding and hand-to-hand fighting as in the Napoleonic wars, but was taken seriously. It seems that at that time—such was his reputation—Kipling could publish virtually anything he wrote: indeed the poem approaches nonsense verse such as Lewis Carroll might have written, to the extent that it is not easy to judge whether there is any point in explaining the ‘errors’.

He has mixed up some of his nautical expressions, but it would be extraordinarily small-minded to cavil at such unimportant errors in this rollicking yarn in verse ! AW writes:

I recall a skit from Punch, sometime in the 1880s, which poked similar fun at modern battleships, with their new-fangled guns worked by the mysterious ‘fluid’ called electricity, which broke down when it was most needed. The captain fought his ship from somewhere down in its bowels, in a manner which did, indeed, come to pass seventy years later. 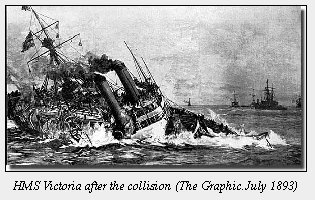 … during manoeuvres in the Mediterranean on 22 June 1893, the fleet was steaming in two lines, which the Admiral ordered to turn inwards. The result was a collision of the two flagships, which were the leaders, and the Victoria, with the Commander-in-Chief, went to the bottom, as did most of her crew.

The great weight of her guns and turret contributed to the rapid capsizing. Her antagonist, the Camperdown suffered severe flooding forward and was also very close to capsizing.

The collision is reported in The Times of 24 June and 6 July 1893 together with the death of Vice-Admiral Sir George Tryon and about 370 others.

Charles Carrington (p. 352) looks at Barrack-Room Ballads and Other Verses in his chapter VII, “Kipling in London” and discusses his method of composing verse. it seems that Kipling collected the words in his mind and then found a tune to which he set them, in many cases inspired by the music-hall songs performed at Gatti’s just opposite his chambers in Villiers Street, London:

… The Barrack-Room Ballads essentially are songs for the ’Halls’ in which the ‘patter’ dominates the musical setting. Apart from Kipling, the greatest master in that art was W.S. .Gilbert (whom Kipling several times imitated in Departmental Ditties) but Gilbert’s method was to compose the ‘patter’ and then employ Sullivan … at writing tunes to it.

See our Notes on “The Absent-minded Beggar”” for Sullivan’s musical setting.

Verse fitted his intuitive habit of mind. The method of the ballad – which suggests a whole story by a phrase or a line – was something that exactly suited him because he too saw things and felt them rather than reasoned about them. It was his method to start fitting words to a tune and to hum them to himself for a little while until suddenly they began to flow.

Lionel Johnson, writing in three numbers of the Academy in 1891-2 collected in his Reviews and Critical Papers (1921), reprinted in Kipling, the Critical Heritage edited by R L Green (p. 103), says of Barrack-Room Ballads:

…far the best are the “Ballad of East and Wesr”, a thing to stir the blood like a trumpet, “The Conundrum of the Workshops”, a charming satire upon critics and criticism; and “The Ballad of the Clampherdown” and the “Bolivar”…

Quite the opposite view, however, is taken by Robert Buchanan in “The Voice of the Hooligan, A Discussion of Kiplingism” (New York, 1900) and reprinted in Kipling and the Critics edited by Elliott Gilbert, (p. 23):

The “Ballads”, thus introduced, are twenty-one in number, of which the majority are descriptive of whatever is basest and most brutal in the character of the British mercenary…

Few of the audiences in the ‘Halls’, or indeed few Victorians outside the ranks of the literati, would have decribed British soldiers as ‘mercenaries’. But Buchanan clearly found the whole busines of soldiering deeply uncongenial. Looking at “Loot” he adds:

….the verses are indeed, with their brutal violence and their hideous refrain, only too sadly understandable. Worse still, in its horrible savagery, is the piece called “Belts”…

“Clampherdown” (see above) A play on clamp, which refers to: various appliances, tools, or instruments with opposite sides or parts which may be screwed or otherwise brought together, so as to seize, hold, compress, or pinch anything. [The Oxford English Dictionary] The name also has an echo of ‘battern down the hatches’, part of the preparation for bad weather at sea.

Channel The English Channel between England and France, known to the French as la Manche – ‘the Sleeve’.

Wherefore she kept her hatches close The image of HMS Benbow (a sister ship of the C(l)amp(h)erdown) at the head of this entry , and also below, shows how low a freeboard the battleships of this period had. As a result, in any kind of a seaway (see the next line), the ‘prudent mariner’ certainly did keep “her hatches close(d)”.

chops in this context the Western entrance to the Channel from the Atlantic, an area where tides meet to form a ‘choppy’ sea.

the bleached Marine The Royal Marines, formed in 1755. are soldiers serving afloat as part of the Royal Navy, and have a long and illustrious history. See Soldier an’ Sailor Too”. It is unclear why this Marine is ‘bleached’. 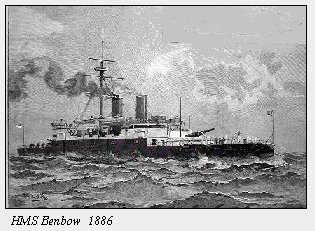 Bow-gun … stern-gun this armament is similar to that of HMS Benbow, a sister-ship of Camperdown launched in 1885.
The two breech-loading 16·25 inch (41·3cm.) guns were the largest then fitted to an HM Ship but the barrels had a short life and tended to droop. They also took four or five minutes to load and were open to the elements and hostile fire – not in barbettes or turrets.. There were other guns of smaller calibre.

stays here meaning ropes or wires supporting a mast, etc. but not usually applicable to this type of gun.

staunchions the uprights round the upper deck that carry the guard-rails or wires, also found between decks

a cruiser light the category of ‘light cruiser’ (which was used later on from 1903 onwards) was about the only category which was not used when Kipling wrote this skit. The term ‘cruiser’ was in use back in the Nelson era, for a warship which cruised – usually to prey on the enemy’s trade – rather than being a part of a battle squadron. Such cruisers might be officially designates as frigates, corvettes, sloops or brigs, depending in their rig, the number of guns they carried and whether their guns were on the upper deck, or main deck.

During the early years of the pax Britannica ((1814-1914) the term cruiser fell into disuse, but in 1876 the first ‘armoured cruisers’ were constructed. Thereafter, the old descriptions of frigate, etc., became more and more meaningless, and small iron, steel and steam warships designed for trade protection and colonial policing became ‘cruisers’, variously 1st, 2nd and 3rd class, protected, armoured, or any combination of those categories. The Clamperdown’s opponent was probably intended to be the French equivalent of a 3rd class cruiser (though in fact, the French navy had no equivalent craft). HMS Pelorus . in which Kipling went to sea in 1897 and 1898 was a 3rd class cruiser.

the dainty Hotchkiss gun This French firm was then making mule-portable and other light guns of small calibre which would be ineffectual against a battleship, but able, if within range, to pick off the crews since they were not in turrets or barbettes and so unprotected, It may be that this is a clue to the nationality of the cruiser.

the bow-gun dropped perhaps, at the end of its life of seventy-five rounds, after which the barrel had to be changed.

She opened fire at seven miles We have said this was a skit – and while the big guns of the period could carry seven nautical miles (14,000 yards, British naval gunnery practice of this period was carried out at 3,000 yards – there were no accurate rangefinders. And at that range, from the lower bridges of the period, a small cruiser would have been little more visible than “a bobbing cork”.

plates vessels were constructed of iron or steel plates rivetted together.

Make it so The classic Naval reply by the Captain when noon is reported to him as he and other officers are taking sights for their noon position.

Steam steam-power was used to train and elevate some guns. The Hotchkiss, however, would be unlikely to sever a steam-pipe.

ram large guns were loaded, whether breech- or muzzle-loaded (and there were still many muzzle-loading rifled guns in service in the world’s navies) by hydraulic power or by hand. The prime mover for the hydraulic machinery was indeed steam, but it would not have been in the turret.

the twisted guides these were the guides for the hydraulic rams.

Swung round she might have turned end-on to reduce the target.

White Whale The beluga (Delphinapterus leucas) an Arctic and sub-Arctic species of whale.

eight-day clock a figure of speech for machinery

Lie down usually the order to men standing on dech when preparing to ram another vessel so they would not fall over and be hurt in the collision.

We dare nor ram perhaps for shelter from enemy fire,.

A.B. an Able-Bodied Seaman, the Naval equivalent of a trained soldier.

armour-belt….fifty feet vessels of this class were only partially armoured, the bow and stern being lightly protected,

purser’s sow live animals were kept aboard H.M. Ships in earlier days. The purser was in charge of victualling, pay, and naval stores

bunkers the compartments where the coal is stowed.

shrapnel anti-personnel shells containing a large number of individual bullets. ejected so as to continue along the shell’s trajectory towards the target; named after Major-General Henry Shrapnel (1761-1842), an English artillery officer.

Grapple her secure the ships together to enable an armed party to board and capture her.

cutlasses short, broad sabres (slashing swords) with a straight or slightly curved blade sharpened on the cutting edge, and a hilt with a cupped or basket shaped guard. [This Editor remembers some aboard his ship in 1942 but only saw them carried on parade ashore in barracks.]

What is believed to have been the last hand-to-hand action carried out by the Royal Navy took place on 16 February 1940, when a boarding-party from HMS Cossack captured a German tanker, the Altmark, and released 299 British prisoners who were confined on board. [See Wikipedia].

cleared the cruiser the ships were secured together and an armed party boarded and captured the enemy vessel just as it was done in Napoleonic times.

conning-tower an armoured structure to protect men on the bridge.

Nelson Vice-Admiral Nelson, the most celebrated English sailor, who died in 1805 at the Battle of Trafalgar in which he defeated the French fleet.

a million pounds in steel a figure of speech – Archibald lists Benbow as 10,600 tons. See “The Ship that Found herself” in The Day’s Work, page 78, line 2. (Or perhaps the reference is to the value of the ship in pounds sterling ?)

cod a sea-fish Gadus morhua, found in the North Atlantic and adjoining waters.

conger-eel a large and ferocious eel, Conger conger, found in the North Atlantic and adjoining waters.