First published in the United Services College Chronicle (USCC), March 20th 1882, while Kipling was Assistant Editor, the earliest of Kipling’s poems to get into his Definitive Verse, and the only one that dates from his time at Westward Ho!

As explained under the title, the poem was: Written on the occasion of the attempt to assassinate Queen Victoria in March 1882. On March 2nd one Roderick Maclean, who had been offended by the monarch’s curt reply to the poems he had sent her, fired a bullet at the Queen outside Windsor railway station. He missed.

‘Stalky’ (Major-General L. C. Dunsterville), who had been Kipling’s study mate, paints an amusing picture of the occasion when the Muse descended on Kipling:

Poets would not be poets if they could know when the divine frenzy was going to inspire them, and when a poet happens to be also a schoolboy the inspiration is pretty certain to come at an unsuitable moment. So it happened that ‘Ave Imperatrix!’ was written in French class at the end of a French textbook.
Dunsterville Chapter 3. 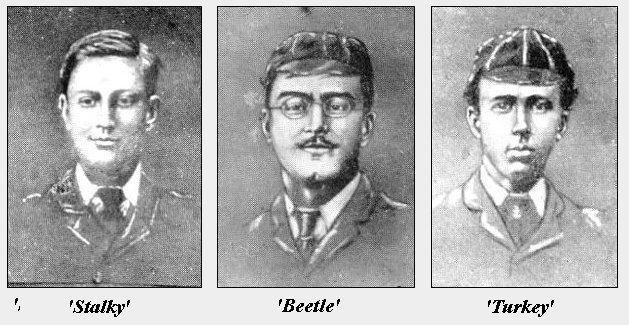 These drawings by George Beresford, ‘M’Turk’, or ‘Turkey’, show the three comrades of Number Five Study at USC. Dunsterville (‘Stalky’) on the left, Kipling (‘Beetle’) in the middle, and Beresford on the right .

In Beresford’s Schooldays with Kipling he devotes half of Chapter XXIV to the poem. He begins with a delightful paraphrase:

In this poem, Kipling was moved to sing of the happy
escape of his sovereign lady, Queen Victoria, from the bullet of an assassin in the spring of 1882.

He celebrates the thankfulness felt in the realm that the maniac’s hand was foiled and goes on to emphasize that one academy, out of several founded to produce militarists, forwards, in sincere though inexpert rhyme, humble congratulations to the monarch.

This tribute, he adds, is appropriate to the sons of soldiers who endured the Indian Mutiny and the Crimean winters and, being deceased, bequeathed weapons to their progeny. The poem then explains that some of the whilom pupils have already done duty in Afghanistan and South Africa, and that they are all brought up to render service to their Queen, Flag and Empire to the best of their ability.

The school, he concludes, though quite unrecognized, requests the sovereign to have confidence that they will put in their whack on any pressing occasion.

‘Turkey’ goes on to discuss the poem (and dismiss it) as the first example of Kipling’s patriotic strain. (Note that he always writes of Kipling as ‘Gigger’, which he maintains was his actual nickname at school. ‘giglamps’ was school slang for spectacles, which Kipling had to wear because of his poor eyesight):

Now, was not this a pouring forth from the full heart of a deeply patriotic schoolboy, full of youthful enthusiasm for his share in an Imperial destiny, handing on the torch of a warlike tradition, gazing with fixed eyes on the figure of Britannia Militans, marching in the foremost files of those who would proclaim the greatness of England and laying all his love and loyalty on the steps of the Throne?

Well, it was hardly that. One may put it down, more modestly, as an attempt in a new genre; Gigger hadn’t touched that kind of thing before. Moreover, the poem was written as it were to order; the occasion called for something like this, and Gigger rose to it; was anxious to see what he could do in this line – a new line, clearly, as there is not a murmur of this note in Schoolboy Lyrics, nor in previous and even subsequent Chronicle verse of Gigger’s college period.

It was the journalist in Gigger who got busy when he started to Write “Ave Imperatrix”. Queen Victoria’s life had been menaced by the revolver of a fanatic. The weapon went off; but harmlessly. Here was something topical for Gigger to sing about; the poetic editor of the Chronicle had to get busy, even if the old battered properties of the militarist and empire-builder had to be dragged out of store, dusted and cleansed of moth.

To Gigger’s astonishment,it all came in some miraculous way rather pat. His muse did not jib; he brought her to the water, and behold, she drank.

Andrew Lycett (p. 75) notes:
Years later, after becoming a photographer, Beresford shocked Dunsterville, by then a major-general, by suggesting Rudyard had written these traditional verses with tongue in cheek. Seymour-Smith agrees with Bersesford: neither gives any reference.

We two, Stalky and I, roared with laughter at the novel tone of the poem and at Gigger’s taking on like that. Gigger, in self-defense, pretended he was really guying the patriotic idea; of course his own mind was superior to all that kind of thing, as we must know.

Stalky could hardly find much to object to in that. Charles Carrington (Chapter 3, Public School) sees Kipling’s stance of the “militarist and empire-builder” as part of his “year-in year out form-room bickerings” with Crofts, the original of King in Stalky & Co.

If he were to take the loyalist side in controversy, it could only be as another provocation to Crofts, the pacifist and liberal.

‘year-in year out form-room bickerings’ is Kipling’s own description of his relationship with Crofts. Something of Myself (p. 32)

Beresford was probably right: the poem was ‘an attempt in a new genre’. Seymour-Smith (Chapter School II, p.46) agrees that it was, as Beresford says, simply an exercise- inspired by the Queen’s escape from an attempted assassination. Seymour-Smith then draws attention to the original that Kipling was copying (or parodying): a poem of the same name published by Oscar Wilde the year before. He describes Wilde as one of Rudyard’s favourite poets of that time, and gives some of Wilde’s verse for comparison, commenting that ‘Wilde’s ‘Ave Imperatrix’ is simply routine.’ Wilde wrote:

For some are by the Delhi walls,
And many in the Afghan land,
And many where the Ganges falls
Through seven mouths of shifting sand,
And some in Russian waters lie….

Whereas the young Kipling wrote:

Such greeting as should come from those
Whose fathers faced the Sepoy hordes,
Or served you in the Russian snows,
And, dying, left their sons their swords.

And some of us have fought for you
Already in the Afghan Pass ….

But where Wilde ended:

Yet when this fiery web is spun,
Her watchmen shall descry from far
The young Republic like a sun
Rise from these crimson seas of war.

Kipling was happy with:

Trust us, if need arise, O Queen,
We shall not tarry with the blow.

Seymour-Smith concludes: ‘That he was content to use Wilde’s poem as a source, however, demonstrates that he was not offended by its sentiments. What we see here is the schoolboy Pre-Raphaelite swept away by Wilde.’

Ave Imperatrix! Latin: ‘Hail to the Empress!’ Queen Victoria assumed the title of Empress of India in 1877

the needy madman the would-be assassin Roderick Maclean was tried for high treason and found “Guilty but Insane”.

One school of many made to make Men The United Services College was started in 1874 by a group of rather impecunious Army and Navy officers who wanted a public school education for their sons but who couldn’t afford the existing schools. They also expected their sons to follow their footsteps into the Services, so the new College must get them through the army entrance exam.

the Sepoy hordes the Sepoy Rebellion, known by the British as the Indian Mutiny, 1857.

some of us have fought for you when the College was founded in 1874, some of the first pupils had transferred from other schools, so could already be in the Army. cf. “A Little Prep” from Stalky & Co. where Old Boys come back to the College and talk about their wartime exploits.

Boer marksmen in the grass the First Boer War 1880.

We shall not tarry with the blow we will strike quickly.