This poem was published in the first edition of Departmental Ditties and Other Verses in June 1886. ORG (p. 5143) notes this as the first publication, and lists it as Verse Number 216. For details of the collection see David Alan Richards p.12.

The poem notes sharply how easily and cheaply a young life can be snuffed out in wartime. It contrasts the cost of educating British Army officers with that of the “home-bred hordes” of tribesmen they are fighting. Charles Allen writes of the year 1886:

The pacification of Upper Burma, so successfully occupied the previous November, was now failing to proceed according to plan. Resistance took the form of ambush and sniping, with officers as
prime targets. In early June the CMG ran a report that a Lieutenant J. E. O. Armstrong of the Hampshire Regiment and another officer had been shot by unseen snipers as they took an evening stroll
outside Mandalay’s Fort Sagaing. Ruddy’s first response was “The Grave of the Hundred Head”:

A Snider squibbed in the jungle,
Somebody laughed and fled,
And the men of the First Shikaris
Picked up their Subaltern dead,
With a big blue mark in his forehead
And the back blown out of his head.

Further reflection led Ruddy back to his first reaction to the news
of Dury’s death seven months earlier and his remark about ‘£1,800
worth of education gone to smash’, which he expanded into the
six acerbic verses of `”Arithmetic on the Frontier”.

Three decades before Wilfred Owen, Kipling turns on their head his beloved
Horace’s lines about how sweet and proper it is to die for one’s
country. His poem opens:

A great and glorious thing it is,
`To learn, for seven years or so,
The Lord knows what of that and this
Ere reckoned fit to face the foe…

The scene shifts to India’s North-West Frontier, where the crude jezail flintlock and the tulwar are the weapons of choice, and the verses go on to expound
on the awful ease with which the product of an expensive education can be blown away by a few grains of crude saltpetre.

[Verse 1] the Pass On the Frontier, the Khyber Pass, the dangerous route northwards into Afghanistan from Peshawar.

Yusufzaies members of a tribe on the Frontier

‘ologies the sciences, many of whose names end in “’ology.” 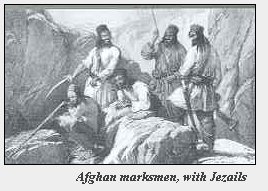 The silver rupee was the basic monetary unit of India. There were some 13 rupees to the £ sterling. Servants were paid some 27 rupees a month, so ten rupees was a substantial sum for a tribesman, if little to the officer he was shooting at. On the Pioneer Kipling was paid 600 rupees a month, about a third of the pay of a senior civil servant.

Crammer a special school to prepare men who were in danger of failing for the Army Entrance Examination. Either Sefton or Campbell in “The Moral Reformers” in Stalky & Co, is described derisively as a ‘crammer’s pup’.

ride a track through a wood.

[Verse 4] Euclid The celebrated Greek mathematician who taught in Alexandria about 300 BC. His theorems were the basis of a good deal of school mathematics well into the twentieth century.

tulwar an Indian sabre. A dangerous weapon in skilful hands.

“captives of our bow and spear” the tribes on the Frontier who have been conquered and incorporated into India by force of arms but are frequently in revolt.

Kipling also used this phrase in “The Captive” (Traffics and Discoveries, page 5 line 18). See the note by Roger Ayers. There are also echoes of this expression in the Old Testament (Jeremiah 6, 23: ‘They shall lay hold on bow and spear…’