Decorated by the blazing colours of a New England fall, underpinned
by meticulous planning by John Radcliffe and Jan Montefiore, warmed
by the generous hospitality of Marlboro College, this symposium was
an outstanding success. In a clean-cut modern auditorium, built in
2005 with the College’s core musical and performing arts in mind, the
scholarship demonstrated by the speakers was world class, a meeting of
minds that hugely reinforced friendships between some sixty American
and British enthusiasts. Elsewhere, dry martinis and a communal dinner
at the Putney Inn played their part.

The themes exposed were often original or in want of further exploration.
After a welcome from Ellen McCulloch-Lovell, now in her
tenth year as president of Marlboro College, Professor Thomas Pinney,
editor inter alia of the 2013 three-volume Cambridge edition of the
poems, delivered the keynote address which picked away at one of the
conference’s dominant issues – what was Kipling’s relationship with
Americans in general and Vermonters in particular? He was currently
reported to ‘make as much as a hundred dollars out of a ten cent bottle
of ink’. Did this antagonise his neighbours or were they flattered by
his presence, his collegiate cider-drinking in a Brattleboro bar, his
essential sweetness of heart, his energy and his manifest interest in the
welfare of others? These four years were highly productive and Kipling
has described them as the happiest of his life. His relations with the
press were ambivalent – while Brattleboro newspapers were always
respectful and sympathetic, ‘his day was wrecked by two reporters from
the Boston Globe … cowardly, vile… American journalism had nothing
to admire and less to respect.’ He refused an interview; this brief and
angry encounter set the tone for the rest of his time in the USA, he being
described as ‘insular, unamiable, impolite’.

In his study of the American chapters of Something of Myself,
Professor Daniel Karlin described how this ‘stranger of an unloved
race’ settled into the Vermont countryside and society, having ‘married
a Balestier girl’, noting ‘the loneliness and sterility of life on the farms’,
the excessive drinking habits in this ‘dry’ state, the political corruption
– in all an observant summary not lacking in affection. Karlin made the
point that Something of Myself with its post-hoc criticism of immigrant
national characteristics was written in 1935; hence Kipling’s implication
that ‘America had failed him’, not ‘he had failed to establish himself in
America’. His account was no doubt influenced by the unhappy story of
his quarrel with Beatty Balestier, the unwritten cause of his departure.
Certainly Kipling’s contemporary letters from Brattleboro are vastly
more positive.

The other side of the Vermont Question – what were the people
really like? – was entertainingly described the following day by Charles Fish of the Dummerston Historical Society. Himself a seventh generation
Vermonter, he touched upon many subjects – the state regulation of
schooling under the ‘vicious law’ of 1892, the sluggish demographics,
liquor sales statistics, the vulnerability of the soil to mismanagement,
the erosion effects of logging, the almost Athenian method of local
decision-making, a ‘suffering state’ and a migrating people. He noted
that Kipling’s tone varied from gently ironic to darkly acerbic. Beatty
Balestier, who threatened Kipling with a lawsuit for defamation and
false arrest if he ever returned to Brattleboro, seems to have been a
reprobate, fond of ‘hard’ cider and given to shouting at people in the
street. Following Charles, Mary Hamer talked about her Kipling and
Trix, A Novel with its remarkable insights, which was reviewed by Jan
Montefiore in the September 2013 Journal.

Professor U. C. Knoepflmacher of Princeton University traced the
intricate timeline of the stories in Kipling’s Jungle Books, showing how
they were reshuffled, jumbled and variously published to make a pattern
of interconnecting motifs. Professor Judith Plotz of George Washington
University described Kipling’s relationship to the Victorian culture of
modernisation and machinery, speculating that ‘.007’ was inspired by
chats with the Brattleboro station-master and pointing up the commentary on American social divisions and engineering efficiency concealed
in the texts. Professor Tricia Lootens of the University of Georgia
compared <Huckleberry Finn with Kim, noting Kipling’s friendship with Mark Twain, showing how both novels are open-ended, while both protagonists, Kim with his lama and Huck with Jim, have to struggle
with their consciences.

Janet Montefiore dealt with Rudyard Kipling’s The Seven Seas
(1896), in relation to the sea stories in Many Inventions (1893). From
ship-owners to lighthouse keepers, from sea serpents to fishermen on
the Grand Banks and naval petty officers, the sea is a persistent interest
which often reveals Kipling’s uncanny ability swiftly and accurately to
sop up seafaring terms of art.

A highlight was the introduction by David Alan Richards of an
important unpublished text, written in an otherwise blank and undated
exercise book: Kipling’s instructions on how to write a short story.
These were given to his sister-in-law Josephine, who herself wrote
short stories and published poetry. There are thirty maxims, running
from ‘A short story needs a beginning, middle and an end’ through
‘Call a spade a bloody shovel and not an agricultural implement’ and
‘Be accurate to a scruple, there are experts on everything out there’, to
the final ‘Do not be afraid of anything’. The high clear voice of great-
great-niece Mary Balestier Dunham provided a moment of charming
theatre as, backed by a photo of Josephine stately in her white court
dress, she read from letters written by Josephine to her sister Carrie
in 1890: ‘I wasn’t afraid of Henry James so I won’t be afraid of Mr
Kipling.’ 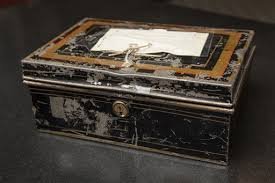 Forgotten for 90 years, the famous Tin Box, discovered in the vault of a Brattleboro bank in 1992, was, with its contents, part of a display of some of the important collection of some 400 catalogued and uncatalogued items held in the Rice-Aron Library at Marlboro College. The tightly folded papers in the box included a copy of Kipling’s wedding certificate, a will, business papers, a royalty account book, early drafts
of eight poems and the only surviving letter from Kipling’s brother-in-law,Wolcott.

Also in this display, compèred by librarians Emily Alling
and Sally Andrews and introduced by Tom Ragle, former President of
the College, was the important contemporary memoir by local historian
Mary Cabot, a rare and intimate picture of their personal lives. The
Symposium concluded with a lively panel question-and-answer discussion
of the day’s subjects by, at which it was agreed that Jan Montefiore
would collate and edit the Symposium papers in a Supplement to the
Kipling Journal, to be published in 2014.

It was a delight the next day to visit the shrine of ‘Naulakha’ after the
lecture by Charles Fish and the reading by Mary Hamer at Scott Farm,
(where they also laid on a professional storyteller to give a charming
rendition of the first three Just So Stories). Mike Kipling’s article in the
September 2013 issue of the Kipling Journal tells of the history of the
house since Kipling’s day and the restoration by the Landmark Trust
USA that has created not only a perfectly repaired exterior painted in
‘Kipling Green’, but tobacco-brown, highly polished and exquisitely
carpentered woodwork in the interior with much original furniture.
Several interesting photographs include one of John Lockwood Kipling,
described here as unique but in fact ‘rare’.

We are grateful to Matthew Barone, Marlboro College’s Director of
Marketing and Communications, who efficiently engaged media attention,
resulting in widespread coverage through the many outlets of the
Associated Press agency as far away as the Washington Post and the
San Diego Union Tribune. The Symposium naturally made a particularly
good story in Vermont, featuring in the Boston Globe and all the
Brattleboro papers.

Will there be a return match? What about Shimla and Mumbai next
time?

There is a full report of the Symposium, including the papers, in KJ 355 for July 2014