On the first day of the October 2013 Symposium, at Marlboro College, the participants were able to view the extensive Kipling collection in the Rice-Aron Library. The Library is named after Howard C Rice Senior, and his wife Amy. 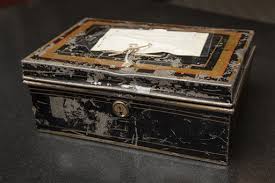 As well as over 400 catalogued and several un-catalogued items, they could see the contents of the small lock box forgotten for over 90 years in the vault of a Brattleboro bank. Opened in 1992, it was shown to contain a copy of the Kiplings’ wedding certificate, a will, early drafts of eight poems (one never published), and parts of a letter from Kipling’s best friend and associate Wolcott Balestier, brother of Mrs. Kipling, the only part of their correspondence known to have survived. Mrs. Kipling is thought to have destroyed the rest after Rudyard’s death. together with many other private family papers.

Among the other objects in the collection is the little known but important memoir by Mary Cabot, hitherto known to the public only through publication in the ELT Journal in 1986, as edited by Brattleboro’s Howard Rice, Jr. Miss Cabot was a local historian and close friend of the Kiplings. She wrote the memoir privately for her sister and brother-in-law Grace and Fred Holbrook, when she bought Naulakha for them in 1903, after it was clear the Kiplings would never return. It gives a rare intimate picture of their personal lives and their relations with friends in the area.

In 1936 Howard Rice published a little volume entitled Rudyard Kipling in New England. Rather than representing the culmination of his interest in Kipling, however, this was merely the first evidence of it. Throughout the rest of his life–while teaching French at Harvard, broadcasting for the Office of War Information, serving briefly as Director of the U.S. Information Library in Paris, then as Assistant Librarian for Rare Books and Special Collections at the Princeton University Library for over twenty years until his retirement in 1970–Rice patiently researched all the references to Kipling he could find in the local newspapers of the time. Naturally this research included Kipling’s
brother-in-law Wolcott Balestier’s life and works as well as the history of the Balestier family. He once told me jokingly that he was probably the only living American to have read Wolcott’s complete works. Then one day, it must have been in 1979, he appeared in my office at Marlboro College with three large boxes containing the typescript of a book, almost complete, entitled Kipling’s Vermont Period and asked my help in getting it published. A year later, without warning, he died.

… a collection of documents, or documentary chronicle, with a special angle of vision. The view is from Brattleboro, Windham County, Vermont, U.S.A.: the Kiplings as their Brattleboro friends saw them.

The introduction, twenty-one typewritten pages including notes, is printed here with its typically precisely researched commentary on Molly Cabot of Brattleboro, author of the most important memoir, with its description of Brattleboro and vicinity, the story of the Balestiers, and the surprising section on William Dean Howells. There then follows Chapter One, Molly Cabot’s brief memoir of Wolcott Balestier, Kiplings close friend and collaborator on their jointly written novel, The Naulahka. The memoir itself is only seven pages, augmented by thirty-eight pages of letters, mostly from Wolcott to Molly Cabot but also including letters to or among other members of the Cabot family; by an addendum amounting to nineteen pages consisting of ,”Gleanings from the Brattleboro Newspapers’ m 1891 and 1892 about serial publication of The Naulahka and then Wolcott’s untimely death; and finally by eighty-eight pages (many not full) of notes, many brief as one might expect but many short essays in themselves.

The second box, the fullest and most important of the three, contains the
typescript of Molly Cabot’s memoir of Kipling “Kipling’s Vermont Period,” 121 pages of text (numbered 1-114 but including seven interleaved pages) and 203 sheets of notes, most of the latter again, however, not full pages (at least
one sheet is devoted to each note) but some once again small essays of several
pages. I have not been able to ascertain, however, exactly how many of the 121 pages of text is the memoir because Mr. Rice did insert some letters in
addition to those included by Molly Cabot herself. Note 12 reads thus:

The excerpts from letters included hereafter in Mary Cabot’s memoir are from letters to her sister Grace Cabot Holbrook, unless otherwise noted. In editing the memoir I have checked these excerpts, where possible, against original letters (Holbrook Collection), expanded them, added new ones, and rearranged them in chronological sequence. Excerpts from what Miss Cabot terms her “Journal”–which was apparently destroyed–are indicated.

The second box, like the other two, also contains xerox copies of proposed illustrations, many of these photographs taken by Molly Cabot herself.

The third and smallest box contains the text and notes of reminiscences of John R. Bliss, edited from a Worcester Telegraph article of 23 February 1936 (shortly after Kipling’s death), fifteen and eight pages respectively; by the Reverend Charles O. Day, edited from an essay m The Congregationalist of 16
March 1899 (at the time of Kipling’s illness in New York), seven and three respectively; and by the writer Charles Warren Stoddard from the June 1905 issue of National Magazine, twenty-six and thirteen pages respectively. ‘ The final portion contains the surviving transcript of Kipling’s testimony at the court hearings on 9 and 12 May 1896, augmented by extracts from the Brattleboro newspapers, The Phoenix and The Reformer, used as a frame, fifty and sixteen pages of text and notes respectively.

The text from the third box of Mr. Rice’s volume are all in the public domain, but the notes for this section as well as the texts and notes from the first two sections are not–and even the texts in the third section are not readily available to the modern reader. Although we might hesitate over the pastiche
represented by some of this material, and over the fussiness of some of the notes, it deserves eventually to be published in some form as a source for scholars and critics. Unfortunately in 1979 the interest in America in Kipling, even Kipling in America, was not such to make it possible for Mr. Rice
to find a publisher before his death.