First published in the Civil and Military Gazette 12 July 1888.
Noted in ORG vol. 4 p. 2080 as ‘Uncollected No. 132’. Collected in Turnovers vol. III, CMG Press Lahore, July-September 1888 as Turnover No. 28 – “The Track of a Lie by one who followed it”. Also collected in Under the Deodars, The Phantom Rickshaw, Wee Willie Winkie, Macmillan New York 1895; the de Luxe Edition vol. V.; and Volume III of the Sussex and Burwash Editions.

The author and a friend discuss an interesting little item of useless misinformation which, when the former prints in his newspaper, turns out to be ‘a liftable stick’ an arresting quotation that is repeated by newspapers all round the world and returns to the author in fifteen months and six days.

Walter Morris Hart (page 34) looking at Kipling the journalist, speaks of “The Man Who Would be King” (amongst other stories) where he appears as the reporter for The Backwoodsman, a disguise for The Pioneer, saying:

The “I” of those stories is, then, Kipling himself. Kipling the journalist and not a mere idealised projection of his own personality…

He confesses to the reporter’s or author’s notebook in “The Three Musketeers” and in “The Courting of Dinah Shadd“ he is on duty as special correspondent with the Army of the South. It is clearly Kipling the journalist who writes “The Track of a Lie”. He follows it though all the exchanges…

He has little adventures, amusing or otherwise, or otherwise, of which he makes copy. He entertains “A Friend’s Friend” with disastrous and comic results…, briefly but impressively….”This is true” he implies, “for I was there and saw it all…

Dt Tompkins does not record this story but would probably, in this instance, permit us to disregard her dictum (page 256) that the “I” of a story is not necessarily Kipling.

See Julian Ralph War’s Brighter Side for for more about Kipling in a newspaper-office, and Something of Myself page 48 for a glimpse of him in his earlier days:

There were newspaper exchanges from Egypt to Hong-Kong to be skimmed nearly every morning and, once a week, the English papers on which one drew in time of need; local correspondence from outstations to vet for possible libels in their innocent allusions; ‘spoofing’ letters from subalterns to be guarded against (twice I was trapped here); always, of course, the filing of cables, and woe betide an error then! I took them down from the telephone—a primitive and mysterious power whose native operator broke every word into mono syllables.

Mail from the United Kingdom would be at sea for a month and then some days on the train to Lahore; The American papers would probably take longer, while important short messages would go by cable. But it would be small-minded to find needless fault with such an amusing little anecdote !

See also ‘Writing or Journalism’ in ‘Themes in Kipling’s Works’; and “The Village that Voted the Earth was Flat” (A Diversity of Creatures), for a lively account of the power of the Press, and of the capacity of stories to take on their own life and run out of control. See also his poem “The Press”.

Consequences of our acts eternal ? apparently a quotation, but we have not traced it; information will be welcomed

Padres Priests, usually Christian (from the Portuguese for ‘Father’) a term mainly applied to chaplains in the armed services. See Newark. Kipling’s Soldiers, page 79. for an army chaplain of the period. In Kim the ‘Mavericks’ had two padres, Father Victor , the Catholic , and the Reverend Arthur Bennett, the Anglcan. 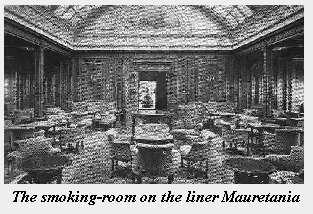 smoking-room a comfortably-furnished apartment once found in liners, hotels and clubs, etc; usually with a bar, where men could relax with a drink and a smoke. It is the ‘frame’ for many stories by Kipling and others. Smoking was discouraged in other rooms.

per mensem Each month (Latin). 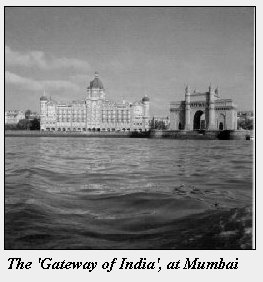 Bombay now known as Mumbai, a great port on the west coast of India, capital of the Indian state of Maharashtra, mentioned in much of Kipling’s writings. See “The Song of the Cities”, “To the City of Bombay”. The ‘Bombay Side’ referred to the administration of the western part of the Indian Empire, as opposed to the ‘Calcutta Side’ which managed the eastern states and provinces.

Madras now known as Chennai, capital of the Indian state of Tamil Nadu. on the Bay of Bengal,

Adam’s Bridge a chain of limestone shoals between the islands of Rameswaram, off the southeastern coast of Tamil Nadu, India, and north-western Sri Lanka (Ceylon). It was once a land connection between India and Sri Lanka.

Ceylon now Sri Lanka – a large island off the south-eastern coast of India, once ruled by the British, now an independent state.

cinchona planters men managing plantations of Cinchona – a genus of about 25 species in the family Rubiaceae, imported from tropical South America. The bark, dried and powdered, includes alkaloids related to quinine, and is used in the treatment of malaria.

Burma now the Socialist Republic of the Union of Myanmar. See ‘Burma’ in ‘Themes in Kipling’s Works’.

Boh Ottima presumably a leader of the rebels, but we have not traced him; see “The Ballad of Boh Da Thone”.

Mandalay the second largest city and last royal capital of Burma. Located 445 miles (716 km) north of Rangoon (also known as Yangon) on the east bank of the Irrawaddy river. See also the celebrated verse of the same name and From Sea to Sea, Volume I, p.217.

Bolan Pass into Afghanistan towards Kandahar, used during the British campaigns there.

hornet a stinging insect similar to and larger than a wasp (vespa crabro).

Singapur Now the Republic of Singapore – an island city-state at the southern end of the Malay Peninsula 85 miles (137 kilometres) north of the Equator. A major commercial centre. See From Sea to Sea, Volume I, page 257.

Malayan Archipelago a large group of islands stretching from Indonesia towards Australia, and the scene of “The Disturber of Traffic” (Many Inventions).

battalions See the note to ‘his chances of a Company’ in “Haunted Subalterns”. 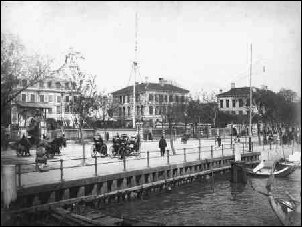 Shanghai then the largest city in China (right), on the central eastern coast at the mouth of the Yangtze River.

Yokohama capital city of Kanagawa Prefecture on Tokyo Bay, in the Kanto region of the main island of Honshu in Japan. From Sea to Sea volume 1, pp. 313-247 tells of Kipling’s travels in Japan.

Poona now known as Pune, the second largest city in the state of Maharashtra, is the administrative capital of Pune district. The cantonment to the east of the city is used by the Indian Army. 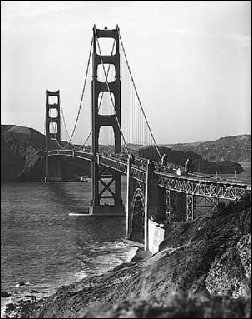 Golden Gate the channel leading to San Francisco Bay from the Pacific Ocean. The Golden Gate Bridge (left) was completed in May 1937.

San Francisco city at the Northern end of the San Francisco Peninsula, between the Pacific Ocean and San Francisco Bay. Kipling’s scornful description of the fortifications in From Sea to Sea (page 471) caused some controversy.

Los Angeles the largest city in the state of California and the second largest in the United States. 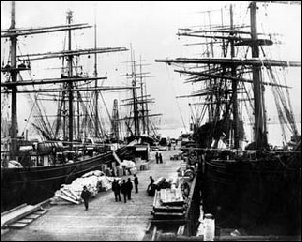 New York-wards New York was and is the chief financial and commercial centre of the United States. with a magnificent harbour (tight) on the Atlantic coast.

Kipling and his wife visited the city in 1893; (Harry Ricketts, page 197) On another visit in 1899 with their daughters Josephine and Elsie, Josephine died of pneumonia on 6th March. Kipling was very ill himself but eventually recovered (ib. p. 249)

New Orleans a major American port on the Gulf of Mexico, and the largest city in Louisiana.

Toronto provincial capital of Ontario. and the most populous city in Canada.

Boston capital and largest city of Massachusetts, on the eastern seabord of the United States.

Philadelphia the largest city in Pennsylvania, in the United States. It was the scene of some of the action of “Brother Square-Toes” and “A Priest in Spite of Himself”, and is also the name of the heroine of “Marklake Witches”; all three stories are to be found in Rewards and Fairies. See also the verse of the same name. 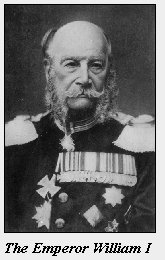 the Emperor William William I (1797-1888) Emperor of Germany and King of Prussia.

Local Government Bill This became The Local Government Act 1888 (51 & 52 Vict. c.41) an Act of the Parliament of the United Kingdom establishing county councils and county borough councils in England and Wales. It came into effect in March/April 1889. 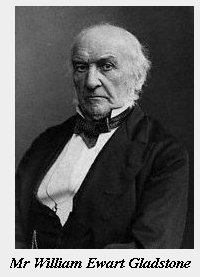 Gladstone William Ewart Gladstone (1809-1898), four times Liberal Prime Minister of the United Kingdom. He was not a popular figure for Kipling, who abhorred the Liberals.

Birmingham city and metropolitan borough in Warwickshire, in the West Midlands of England.

Yellow Wrapper presumably an English newspaper but we have not identified it. Information will be welcomed. The expression ‘yellow press’, however, is usually taken to refer to irresponsible cheap journals that specialise in rumours and scandals, often without any foundation. The term ‘gutter press’ is also used. (Perhaps it is the same paper the narrator of “The Honours of War” said he represented – see A Diversity of Creatures Page 119, line 31 onwards.)

Bombay Zoological Society not traced, but the Bombay Natural History Society was founded in about 1884.

By Jove! a mild oath expressing surprise or emphasis. Jove is also Jupiter, the king of the gods in Roman mythology. See “Judson and the Empire” (Many Inventions), where the principal character is known as ‘Bai-Jove Judson’.

shilling there were twenty shillgs to the £ Sterling before decimalisation – now the equivalent of five pence. The narrator’s comment suggests that nominally there were ten rupees to the £; the actual rate was closer to fifteen.