This tale first appeared in the Civil and Military Gazette of 27 May 1887 (see ORG Volume 3, page 1607 Uncollected No. 79). It was collected in Plain Tales from the Hills in the Swastika Edition of 1899, published jointly by D. Appleton & Co, The Century Co. and the Doubleday and McClure Co., New York, and in the Sussex Edition vol. I as an additional Plain Tale from the Hills.

Interestingly, “Haunted Subalterns”, together with “Bitters Neat”, another ‘uncollected’ Plain Tale, is included in Volume 1 of the de Luxe Edition of Plain Tales from the Hills, published in 1897 by Macmillan, though not in the first or many subsequent printings of that collection by the same publisher in the Uniform Edition.

A slight but quite entertaining anecdote concerning two young officers and their strange, apparently supernatural, experiences, including ransacked rooms, mysterious white figures, and a banjo which plays by itself. All remains inexplicable, and Kipling concludes: ‘The Devil may have been a hoax. If so, it was one of the best ever arranged. If it was not a hoax…but you must settle that for yourselves.’

Kipling and the supernatural

Many of Kipling’s stories are concerned in one waty or another with the supernatual. See Themes in Kipling’s Works.

In some of these stories, “The Phantom Rickshaw”, “At the End of the Passage”, “The House Surgeon”, “They”, “The Dog Hervey”, supernatural phenomena are central to the narrative, and are a serious matter. In others, “The Sending of Dana Da”, “The Rout of the White Hussars”, “In the House of Suddhoo”, “My Own True Ghost Story”, they are shown to be created by trickery or over-heated imagination.

This tale may well have been based on an anecdote told to young Kipling over a peg or two in the Club in Lahore, or in one of the Officers’ Messes he visited. It has not been taken very seriously by readers over the years. In July 1939, from a paper by Mrs G R Thomson presented the previous January to the Victoria B.C. branch of the Society, KJ 050/48 published this comment:

When the subalterns went on a revel,
They were haunted and plagued by the devil.
But, if Kipling could speak,—
With his tongue in his cheek,
He would say : “This is not on the level !”

the ‘Inextinguishables’ the nickname of an un-named regiment, signifying ‘unquenchable’ or ‘indomitable’.

gymkhanas meetings for sports of all kinds, probably from the Hindi gend-khana (ball-house), the name given to a racquets court, and applied to places for equestrian and other contests. [Hobson-Jobson]

General Orders Regulations issued by the Commanding Officer of a unit, setting forth his rules for the conduct of his command in various situations.

his chances of a Company his chances of promotion to Captain and the command of a Company.
Roger Ayers writes: ‘The establishment of an infantry battalion in India in the 1880s was 915 all ranks but in practice it was almost always somewhat below this figure. A battalion had eight companies, each commanded by a captain with two subalterns and about 90 NCOs and men. A subaltern could serve as second-lieutenant and then lieutenant for anything up to ten years before ‘getting his company’ and promotion to captain.’ 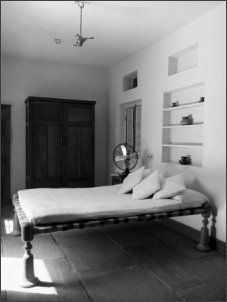 banjo a stringed musical instrument played with the fingers. Very popular at the time, it has the neck of a guitar and the body of a tambourine. Kipling celebrated it in “The Song of the Banjo”.

shaitan-ke-hanky-panky shaitan is the Evil One, the devil, hanky-panky is the patter of a conjuror, trickery – hence upside-down again. [S.K.]

Govindghar ORG notes two places of this name, one near Alwar, the other near Rewa. 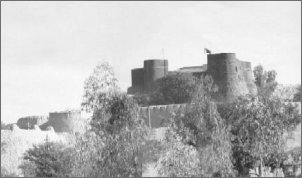 Jumrood (the spelling varies) a famous fort on the way to the Khyber Pass about 11 miles (17.7 km.) to the west of Peshawar; it is shown on the reverse of the Indian General Service Medal (1880-1935)

Phillour the railway junction for Lohian and Ferozepuron the border line of Ludhiana and Jalandhar (Jullundar) Cantonment.

cantonments the European quarter outside an Indian town, with accommodation for military and civilians, which figures in many of the stories.

banquette across the Fort Ditch in fortifications a ‘banquette’ is usually a fire-step in a trench or on a wall, which enables a marksman to fire over the parapet. Here it is evidently a bridge.

oratorio a concert performance for orchestra, soloists, and chorus, uusually with a dramatic religious theme; the supreme example being Handel’s “Messiah”, first performed in Dublin in 1742.

seven other Devils an echo of Matthew 12, 45: ‘Then goeth he and taketh with himself seven other spirits more wicked than himself.’

D. T. delirium trimens an extreme condition brought on as a result of acute alcohololism, commonly known as ‘the blue devils’ on account of the hallunications that ensue. [Black’s Medical Dictionary].

See “The Dog Hervey” (A Diversity of Creatures).

the blue variety ‘the blue devils’, see the previous note.

budnamed given a bad name, brought into ill-repute. [S.K.]

time-expired men soldiers whose engagements have expired and are on their way back to the United Kingdom for discharge. See “The Big Drunk Draf’” (Soldiers Three) and the verse “Troopin’ “.