Tiger! Tiger! Burning bright
In the forests of the night,
What immortal hand or eye
Could frame thy fearful symmetry?

[Page 87, Heading] Eight lines of verse, untitled, beginning ‘What of the hunting, hunter bold?’ Collected as a Chapter Heading in Songs from Books. Philip Holberton notes that the poem is spoken by two different voices in alternate lines.

[Page 87, line 9] Now we must go back to the first tale Omitted in First English edition, reads ‘Now we must go to the last tale but one’ in the First American. Both refer to “Mowgli’s Brothers”.

[Page 88, line 10] yellow pariah dogs vagabond dog of low breed in India according to J Lockwood Kipling (pp. 266-267): ‘The pie-dog, pariah, or street-dog is usually rufous yellow, but all known dog tints occur… Chronic hunger is the central fact of his life, which is one long search for food, and his pastime is another long search for fleas.’

[Page 89, line 17] Only the gray ape a reference to the despised bandar-log, see “Kaa’s Hunting”.

[Page 90, line 4] Messua See Kipling’s list of names. A woman half-thinking that Mowgli is her son, though in fact this village is twenty miles from the wolf’s cave where Mowgli took refuge as a baby. See also page 91, line 10 and page 92, lines 3-5. She concludes that Mowgli has been sent in place of her son Nathoo. (page 91, lines 10-11).

[Page 90, line 28] Looking glass, such as they sell at the country fairs followed by ‘for eight cents’ in the First English but not in the First American Edition or later editions, which is curious because the reference is obviously to American fairs rather than English or Indian ones.

[Page 95, line 27] strong as a bull In the First English Edition and reprints the following two sentences link this end of the paragraph to the next one:

He certainly had no notion of what fear was, for when the village priest told him that the god in the temple would be angry if he ate the priest’s mangoes, he picked up the image, brought it over to the priest’s house, and asked the priest to make the god angry and he would be happy to fight him. It was a horrible scandal, but the priest hushed it up and Messua’s husband paid much good silver to comfort the god. And Mowgli …

[Page 95, line 29] caste In India, a caste is a hereditary group or social class, marrying within the group or class, having a common name and frequently a single common occupation, or certain related occupations. 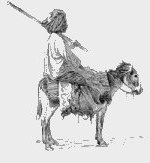 [Page 96, lines 4/5] the potter is a low caste man and his donkey is worse J Lockwood Kipling writes: ‘here in India, by formal prescription, only the gypsy, the potter, the washerman, and such-like folk, out-caste or of low caste, will mount or own the ass.’ (p. 76)

[Page 96, line 10] buffaloes J Lockwood Kipling describes the status of buffaloes (pp. 154-7) He mentions the pleasure they have in wallowing in mud and writes: ‘It is truly said that herds of buffaloes can defend themselves from the tiger, and they will also defend their herdsmen … And have sense enough to combine and form square to repel attack.’ (p.156)

[Page 96, line 20] Tower Musket ‘Musket’ is the term applied to the British infantry fire-arm from c.1550 onwards until and even beyond the adoption of rifled small-arms in 1850-60. The ‘Tower Musket’ was a type of muzzle-loading flintlock of about 1800 maintained in the Armoury of the Tower of London [ORG].

[Page 96, line 26] huqas The water-pipes of India. There is one behind Mahbub Ali in this illustration (left) by Lockwood Kipling from Kim. 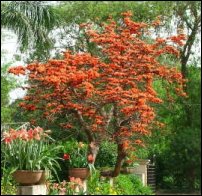 [Page 102, line 17] kite the name given to several birds of prey. Milvus gorinda is the pariah kite of India. (See the note on Chil, in “Mowgli’s Brothers”.

[Page 105, line 23] ladies’-chain fashion In the ‘square dances’ of former days, some of the figures included a ‘ladies’ chain’, in which the femalepartners moved in procession one after the other, in and out between the male partners formed up in a line or circle [ORG].

[Page 109, line 4] the terrible charge of the buffalo-herd R A Sterndale writes of buffaloes (p. 241 in 1929 revised edition): ‘a number of them together will not hesitate to charge a tiger, for which purpose they are often used to drive a wounded tiger out of cover’.

[Page 111, line 9] singe Shere Khan‘s whiskers. See Kipling’s own note in the text, but also “In the Rukh” (Many Inventions, page 208, line 6) where the whiskers are said to be valued by the forest-rangers. 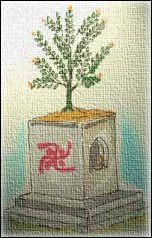 [Page 116, line 10] tulsi plant (left) one of the varieties of Basil, the family of aromatic herb, sacred to the god Vishnu.

[Page 120, line 19] It was then that Mowgli … verses This sentence was omitted from the First English Edition, but was in the First American Edition and was later included in the standard English editions. “Mowgli’s Song” was printed at the end of the story.

[Page 121, line 18] a story for grown-ups a reference to “In the Rukh” which had already been published in Many Inventions in May 1893.

[Pages 122-4] Mowgli’s Song: 26 lines of free verse: the song mentioned on page 120. This song of triumph THAT HE SANG AT THE COUNCIL ROCK WHEN HE DANCED ON SHERE KHAN’S HIDE, as the sub-heading says, relates how he killed Shere Khan with the help of Grey Brother and Akela, and Rama, the King of the Buffaloes, just as in the story. But Mowgli is also mystified: both the Man-Pack and the Wolf-Pack have cast him out and he doesn’t know why; he cries and laughs at the same time, and in the last line he says ‘My heart is heavy with the things that I do not understand.’

He shows the same mix of emotions in “Man goes to Man”, the poem that heads “The Spring Running”, when he leaves the jungle because, as Akela prophesied as he died, ‘Mowgli will drive Mowgli.’ (“Red Dog” p.257). See also “In the Rukh” in “Many Inventions. [P.H.]