[Page 45, verse heading] Maxims of Baloo Four rhymed couplets in the style of “The Law of the Jungle” (The Second Jungle Book, p. 29) which does not include these lines. Collected in Songs from Books as a Chapter Heading to “Kaa’s Hunting”.
Peter Keating (p. 96) notes that:

“The Law of the Jungle” is the first of Kipling’s experiments in a type of poetry with which his name would become closely, and sometimes embarrassingly, associated. Its purpose was to inculcate fundamental values and beliefs by means of epigrammatic lines which would be easily memorised. Within the context of the Jungle Books Kipling’s main concern was to compose moral precepts which had a suitably ancient or primitive feel to them. Baloo, we are told: ‘always recited them in a sort of sing-song.’

If Kipling had an ancient model in mind, it may have been the Biblical Proverbs: nearer at hand there were such varied examples as Walt Whitman and Martin Tupper for him to draw on. In comparison with some of his later poems of this kind, the “laws” of the jungle are of limited or indirect relevance to human life: the original title of “The Law of the Jungle” was the more specific “The Law for the Wolves”. However, two of what Kipling calls “rulings” are particularly important. First, the assertion that all communities are compact units, in which individualism must thrive but never be allowed to fragment the whole: “For the strength of the Pack is the Wolf, and the strength of the Wolf is the Pack.” Secondly, the insistence that the well-being and safety of a community rest on all of its members accepting the primacy of “The Law” and “obeying” it. Those who are outside the law are portrayed as the “Bandar-log” or monkeys whose “Road-Song” [see the note on page 84 below] is one of Kipling’s more flamboyant rhythmic exercises.

[Page 45, line 5] heavy-browed Sanbhur a large Indian deer, genus Rusa. The best known of the five species within this genus, Rusa unicolor is a very massive animal standing as much as 54 inches at the shoulder, with, in the case of some stags, antlers up to 45 or 50 inches in length.

[Page 46, line 1] revenged himself on Shere Khan the tiger Omitted in First American but present in To-day and the First English Edition.

[Page 46, line 8] The Hunting Verse not to be found in Kipling’s “The Law of the Jungle”, nor written in verse.

[Page 49, line 22] Hathi See Kipling’s list of names. Almost always followed in the Jungle Books by ‘the wild elephant’. The wild Indian elephant is not, though, included in Sterndale’s list of animals in Seoni. He gives the native name as Hati. 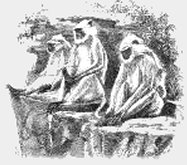 [Page 50, line 22] Bandar-log See Kipling’s list of names. These would have been langurs (right, as drawn by Lockwood Kipling). At one time the phrase Bandar-log passed into the English language, meaning an undesirable group of people.

[Page 53, line 24] What the Bandar-log think now the jungle will think later This is reminiscent of the phrase once commonly used: ‘What Manchester thinks today England will think tomorrow’, a boast from the glory days of the Liberal Party, which was particularly strong in that city, and the Manchester Guardian. Consciously or not, Kipling had English politics at the back of his mind when writing this, as in his American adaptation in “A Walking Delegate” (The Day’s Work page 54, line 26): ‘What the horses o’ Kansas think to-day, the horses of America will think tomorrow’. Kipling had a low opinion of politicians, particularly Liberal politicians. 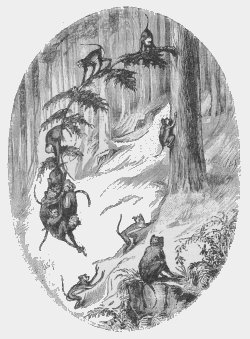 [Page 55, line 6] the flight of the Monkey People through tree-land
Lockwood Kipling, who had observed the monkeys closely, and – unlike Baloo – had a certain affection for them, wrote (pp. 68-69):

‘At one moment a creature is in tranquil meditation on the creation of the world or the origin of evil, at the next it has thrown itself backward apparently into illimitable space, but at the right instant a bough is seized and the animal swings to another and another with infallible certainty’.

[Page 60, line 24] Kaa was rather deaf Snakes have no external ear or eardrum, but possibly the ear is sensitive, not to airborne vibrations, but to those transmitted through the inner ear from the ground. (ORG) 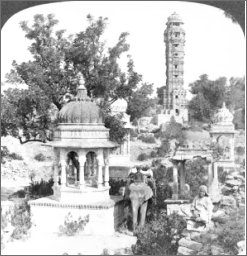 [Page 64, line 26] Cold Lairs See Kipling’s list of names. According to R L Green in the ORG, the mostly likely origin for the ruined city is Chitor in Mewar (right): ‘more ruinous and overgrown, more isolated – and perhaps improved with the aid of a building or two from Amber’.

Kipling visited the abandoned cities in 1887 and described them briefly in letters XI and III in Letters of Marque (From Sea to Sea. Of Chitor he wrote (vol 1 p. 96):

… over all — over rent and bastion, split temple wall and prone pillar — lay the ‘shadow of its beauty while it flourished in its pride.’ The Englishman walked into a stately palace of many rooms, where the sunlight streamed in through wall and roof, and up crazy stone stairways, held together, it seemed, by the marauding trees…
[The passage quoted by Kipling (‘shadow of its beauty…’) is from The Embassy of Sir Thomas Roe to the Court of the Great Mogul, 1615-1619″, published in 1899, for the Hakluyt Society.]

[Page 66, line 11] By the Broken Lock a reference to Bagheera’s escape from captivity in the King’s cages at Oodeypore (Udaipur).

[Page 77, line 27] full-power, smashing blows This is apparently an error by the author. A note in KJ 180, December 1971, page 1 quotes from Stephen Hawys in his book Mount Joy (Duckworth, 1968), which includes an account of collecting and packing some large pythons: ‘I learned that any box intended to carry a snake must be softly padded on the inside because a snake’s nose, like a shark’s, is an ‘Achilles heel’ and a snake with a bruised nose is as good as dead from a Zoo’s point of view’.

[Page 81, line 17] a python’s powers of fascination In this story these are exerted strongly over hundreds of monkeys, together with Baloo and Bagheera but not over Mowgli. ORG comments that: ‘It is widely believed that snakes can exercise a paralysing attraction over their victims, but there appears to be no scientific evidence for this.’

[Page 83, line 8] by Mother Wolf’s side in the home-cave In To-day and the First American Edition this reads: ‘put down in the home-cave. See the note on page 7 line 17.

[Page 84] Road song of the Bandar-log four verses of eight, eight, nine and four lines, collected in Songs from Books.