Included in Quartette the collection he published with his parents and sister on 10 December 1885. It was never collected by Kipling but is to be found in Rutherford (p. 302) and Pinney (p. 1785). Pinney notes (p. 2254) that Kipling signed his name at the end of the poem in a copy of Quartette presented to Meta de Forest by Lockwood Kipling, now in the British Library.

An attractive young woman has a secret, she has false teeth. Unfortunately they are stolen from her bedroom by one of the rhesus monkeys which are common in Simla, which chews them up and leaves them
at the door of another lady, a rival. She returns the wreckage, but not before maliciously telling all her friends. Much embarrassment ensues.

Louis Cornell (p. 85) calls the piece vulgar and rates it worse than any of the Bungalow Ballads which he has already dismissed as poor light verse.
Rutherford (p. 302) quotes a letter from Kipling’s father to Margaret Burne-Jones on 31 January 1886 about Kipling’s reluctance to accept criticism, deploring the coarseness of the poem. Kipling himself cannot have been happy with it, since he did not collect it even though he had included it in Quartette.

pice copper coins of very small value, 1/64 of a rupee.

Plevna, Schipka siege and battle in the Russo-Turkish War uf 1877-8. Actual human teeth were used in dentures at that time, as well as ivory from rhinoceri.

Macacus Rhesus rhesus monkey. Very common in Simla to this day, and prone to steal the spectacles off the noses of visitors. See “Collar-Wallah and the Poison Stick.”

Sterndale Robert Armitage Sterndale, author of
Natural History of the Mammalia of India and Ceylon, Calcutta and London, 1884. 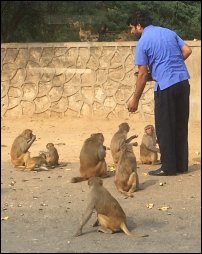 Bandar A monkey. They are very common in the streets and gardens of India, fearless, shameless, and often tiresome. See the bandar log (monkey folk) of the Jungle Books. Also “Divided Destinies”, one of the two Bungalow Ballads included in Departmental Ditties: ‘It was an artless Bandar and he danced upon a pine. ‘

khud steep valley or hillside. See “Over the Khud”.

Khitmutgar Servant who waits at table.

darwaza banded indicated she was ‘not at home’.