There is a holograph [handwritten by Kipling] version in Sundry Phansies, the notebook presented by Kipling to ‘Flo’ Garrard, the beautiful art student with whom he had fallen in love after meeting her in the summer of 1880, aged fourteen. There is no confirmed date for the poem. Pinney suggests 1881 or 1882. 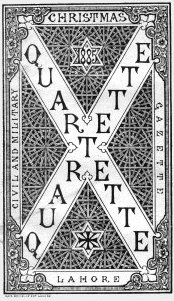 The poem was published with minor, but significant, variations in Quartette in December 1885. This Christmas Annual by “Four Anglo-Indian Writers” was the work of Kipling, his sister Trix, his father and his mother, and was printed by the Civil and Military Gazette Press in Lahore. We have used the Quartette text in this Guide.

The last two lines of the published version have no equivalent in Sundry Phansies, nor are the pronouns “He” and “His” capitalised there. (Rutherford pp. 30 & 108). Click here for the page as it appeared in Quartette.

Trix was almost as entranced as her brother, recalling Flo’s ‘beautiful ivory face, the straight slenderness of her figure, and the wonder of her long hair when she brushed it at night’

We know little of what really passed between Flo and Rudyard, but it is clear that he saw himself as passionately in love with her, though she does not seem to have returned his affections. This did not deter him from writing many love poems about their relationship and sending them to her in Sundry Phansies in 1882. When he left for India in October of that year he saw himself as engaged to her, though she evidently made it clear to him by letter in July 1884 that she was not interested in him.

In 1890, back in Europe, he encountered her again, and visited her in Paris, where she was studying, though it was still clear that she had no desire for a romantic attachment. She was living with a friend, Mabel Price, in a close lesbian relationship. In The Light that Failed (1891) the hero’s doomed relationship with his childhood love echoes Rudyard’s bitter feelings about Miss Garrard.

Harry Ricketts (p. 80) discusses this poem at some length. He gives an excellent summary of it, and then puts forward a theory to explain why Kipling republished it and added a new final couplet:

Rud’s continuing obsession with Flo also left its mark on Quartette. Of the Christmas supplement’s 16 pieces, he contributed half: three stories and five poems. All but one of the latter were no more than exercises in Anglo-Indian light verse, but “The Second Wooing” was pitched in a quite different key.

In long, lingering couplets, a woman described being visited by ‘One at midnight, on golden pinions’, who declared that he was Love itself, bringing her ‘a passion back from the dead’. The woman and her ghostly lover raked over the embers of the past and from its ashes tried to resurrect a new love. Here, once again, Rud was recycling old material. He had originally written the poem at school under the title ‘The Visitation’ and included it in Sundry Phansies, the collection he presented to Flo before leaving for India. He now changed the title and provided a new ending:

And then, when the dawn was approaching, He paled in the coming light;
And e’en as He faded from me so Love passed out of my right.

His motive for exhuming, recasting and publishing this piece of Pre-Raphaelite juvenilia was revenge. ‘A Visitation’ had left Flo and himself with a possible future, but with a vindictive twist the revised version cancelled that possibility. The obvious rhyme for ‘light’ in the final couplet was ‘sight’–whereas ‘right’ not only undercut the predictably bland conclusion, but entirely altered the point of the original poem. With that single word, Rud turned “The Second Wooing” into a re-enactment of his dismissal of the previous year – with the tables turned. It was now Flo who was rejected, left with the knowledge that she had forfeited both the right to Rud’s love and – the real pay-off – the right to Love itself.

Ricketts bases his “revenge’ theory chiefly on the reading “right” for the final word of the poem, as published in Quartette. It is worth noting that Andrew Rutherford, when editing the poem for his volume Early Verse by Rudyard Kipling, 1879-1889, discounts this (p. 108):

I take “right” in the last line to be a misprint for “sight” – one of the many errors Kipling lamented in the printing of Quartette.

In support, Rutherford quotes a letter from Kipling describing the tribulations this involved:

Ram Das, excellent Hindu that he is brings me pages on pages each viler than the first – ‘Sar I cannot understand’ says he, and I have to go through it all again. If Quartette comes out without a howling misprint in every other line it will be by the blessing of Providence.

John Radcliffe is sceptical about Rutherford’s view, arguing that for such a significant piece of his work it is inconceivable that Kipling would have failed to correct a crucial misprint in Quartette. This had to be a handsome publication, and – a very experienced editor – he spent all night before the final print-run making corrections, rather than relying on Providence. (See Thomas Pinney (Ed.) Letters of Rudyard Kipling vol 1 pp. 104/5).