Published in Echoes by Two Writers in Lahore in August 1884. A parody of Wilfrid Scawen Blunt. Listed in ORG as No 125.

Collected, with the sub-heading (Wilfrid Blunt) in

The rider has been thrown from his horse into the dust. He is determined to climb back but the horse is wild, rearing and kicking and showing no sign of submission. The rider vows to master him in the end with the aid of a heavy bit.

Kipling left United Services College in July 1882, where he had read widely and written copiously, determined to become a published poet. In October he became Assistant Editor of the Civil and Military Gazette in Lahore. See our notes on “A Vision of India” for an account of his experiences and state of mind at that time.

Kipling does not seem to have done much riding in India although his father gave him an old stallion named Joe, and there is mention of him playing polo. He had a couple of outings and falls from his horse at Rottingdean on his return from South Africa to England in 1898 and returned to the bicycle. Once he discovered the motor-car, however, he never went near a horse again, though he wrote some excellent stories and verses about hunting.

For more affectionate relations between man and horse see “The Maltese Cat”.
See also “Thy Servant a Dog”, “My Son’s Wife”, and “Fox-hunting”. 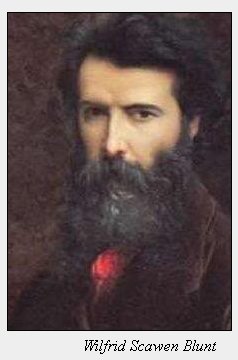 Wilfrid Blunt (1840-1922) was an English poet, whose works included Sonnets and Songs by Proteus, which Kipling must have encountered. He led a colourful life, living near Cairo in Egypt for a time, where he and his wife were responsible for preserving the Arabian Horse blood-line at their Crabbet Arabian Stud. He held strongly critical views of British imperialism in Egypt, Ireland, and elsewhere, for which he was banned for a time from entering Egypt.

This poem reflects Blunt’s interest in horses. However, Ann Weygandt, who calls it (p. 137) – rather severely – ‘an indifferent parody of a protean sonnet’, comments that it tells us almost nothing of what Kipling thought of Blunt. It seems unlikely that he approved of the older poet’s political views, or that Blunt approved of Kipling when he became well-known.

In 1899, the year in which Kipling’s poem “The White Man’s Burden” was published, Blunt wrote in Satan Absolved: ‘The white man’s burden, Lord, is the burden of his cash.’ If this poem carries a political message it is that rebellion should be firmly repressed, a view that Blunt would assuredly have rejected.

[line10] girth the strap that goes under the horse’s belly to hold the saddle in place.

bethink archaic or poetic instruction to ‘consider this’.

[line14] bit in this context the part of the harness that goes in the mouth of the horse, see Headnote.