It was also reprinted as a single story (Macmillan, London, 1936), with illustrations by Lionel Edwards, R.I., with four full-page coloured illustrations and 25 black-and-white pencil drawings. [The ORG speaks of this as being an edition of the whole book, The Day’s Work, but this is almost certainly incorrect. None of the standard bibliographies mention such an edition, while the ORG, in amplifying the comment, speaks of four full-page coloured illustrations and 25 black and white drawings, exactly as in the single story volume.] Lieutenant-Colonel Roger Ayers also informs us that there has been a further edition of this story, with the same illustrations, published by the Lambourne Press, London 1989 (ISBN 0 9513697-3-3).

The present editor has a soft spot for the tale having been introduced to it at his preparatory school, at the age of 10-11. On Sunday evenings after chapel in winter, our headmaster would gather the 50 or so boys of the upper school in his study, where we sat on the floor, on chairs, on cushions, while he read to us: mostly I remember Conan Doyle’s The Exploits of Brigadier Gerard, but “The Maltese Cat” also stuck in my mind.

This is a story about a game of polo – or to be more precise, one polo pony, the ‘Maltese Cat’, in that game. Kipling’s bent for anthropomorphism is once again in evidence, but with more justice, for a pony is at least a sentient being, not like a ship or a railway engine. The setting is India; to be precise, the polo ground at Umballa, (now Ambala, in the state of Haryana, North-west India), then a major army cantonment. We are about to have a description of the Final match of the ‘Upper India Free for All Cup’ in the year 1880-something. Various details will be revealed as the tale is told, but for the uninitiated it may be said that the match is between a team from ‘The Archangels’ and one from ‘The Skidars’. The Archangels are from a British (almost certainly) Cavalry regiment, whose members are well-to-do: The Skidars are a ‘poor but honest native infantry regiment’, whose British officers probably had little to live on beyond their pay. After an epic struggle, the Skidars are victorious.

The story was first given the title of “The Manx Cat” (presumably because the ‘Maltese Cat’ has a short “neat polo tail” – see page 279, line 16 – similar to the stub end of a tail that a feline Manx cat has) and there are indications of it in the magazine story. It was for a time the author’s intention to include it in a Third Jungle Book, but the idea of this book never took shape.

Professor Carrington’s special note on “A Walking Delegate” in the ORG – also to be reproduced in this Guide – is worth attention, for it also mentions the story and Kipling’s own keenness to master the game of polo in spite of his poor eyesight. He played on his grey pony, “Dolly Bobs” at Lahore in 1884-86.

After the events of 1857-8, known as the ‘Indian Mutiny’ to the English of the next century, and today more often referred to in India as the (First) War of Independence, British military presence in India was two-fold. There was a large army, the successor of the Honourable East India Company’s army, which was recruited in India, and administered, equipped and paid by the British-controlled Government of India. It was employed, until 1914, very largely in India alone, though Imperial campaigns were fought in Ethiopia and Burma and elsewhere. The rank and file were native Indians (some came, as they still do, from independent states such as Nepal – the Gurkhas): non-commissioned officers were all native Indians, promoted from the ranks: there were Indian superior officers, some of whom later received Viceroy’s commissions. (There were also Anglo-Indians and Europeans in the Indian Volunteer Force, a Territorial, or National Guard, reserve – cf young Ottley in “The Bold ‘Prentice” in Land and Sea Tales for Scouts and Guides). But all the senior regimental officers and the General Staff were British. This was the Indian Army: the ‘Skidars’ were part of that army.

There was also a very substantial Imperial garrison of British troops: over the years it varied in size, but in broad terms it was between one-third and one-half the size of the Indian Army. British regiments would stay for a considerable period in India, perhaps up to seven years at a stretch, with recruits coming out, and time-expired men going home, annually in the Imperial troopships. The Crocodile was one – see “Soldier and Sailor Too” (Barrack Room Ballads): also the Malabar and Jumna in “Troopin'” (also from Barrack Room Ballads). They were recruited in Great Britain and paid by the Home Government, but (subtle difference) paid for by the Indian Government. The Archangels were, it is implied though not specifically stated, part of the British Army in India. In social (and financial) terms there was a vast gulf between the officers of a crack British cavalry regiment, and the British officers of a native infantry regiment. That said, it should not be inferred that one army was superior to the other in any way. Regimental tradition could be as strong in the Indian Army as in the British Army, with successive generations, both Indian and British, following one another into ‘their’ regiment.
Thus, the scene is set for a classic version of the old David versus Goliath tale. It is a superb piece of descriptive writing, although it may not have been good polo by modern standards.

The Game of Polo

Polo (from Tibetan pulu ‘a ball’) is the most ancient game with stick and ball. Hockey, hurling (the Irish game), and possibly golf and cricket, are descended from it. Polo was once described as ‘hockey, or hurling, on horseback’, but historically the reverse is the case: hockey and hurling are polo on foot. Persia, from the earliest records extant, was the home of polo, which through the ages spread to Constantinople, through Turkestan to Tibet, China and Japan, then from Tibet to Gilgit and Chitral (the area where modern Afghanistan, Pakistan and Kashmir meet), and possibly to Manipur (one of the most eastern states of India, bordering on Myanmar (Burma). It flourished in India in the 16th century, and after a blank of 200 years it came into Bengal from Manipur. 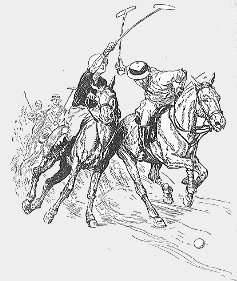 Major-General Sherar in 1863 reintroduced it to India with two teams of Manipuri natives. In 1869 it was brought to England by the 10th Hussars and in 1871 the first recorded match was played on Hounslow Heath (Hounslow was one of the major cavalry barracks in England) between the 9th Lancers and the 10th Hussars, with eight players a side. Another account says that in about 1850 the British planters in Assam began to play in local polo, and that in 1859 the Cachar Polo Club, “the oldest in the world”, was formed.

[Assam was the general name for the eastern area of British India, which contains Manipur. The hilly areas are well suited to growing tea, and the British developed substantial tea plantations in the area in the second half of the 19th century.]
The first code of rules was drawn up by the committee of the Hurlingham Club in 1874. This club in 1876 fixed the height of ponies at 14.0 hands; a hand is four inches, and the measurement is taken from the point of the withers – at the top of the pony’s foreleg – to the ground. At this time five players a side was the rule. In 1882 the number of players on each side was reduced to four.

In 1919 the height limit of ponies was abolished. In 1921 a committee in London evolved a code of universal rules, which have been adopted wherever polo is played, with local modifications as regards height of ponies and duration of matches.

Polo today is played with four players on each side, on much the same principles as hockey and association football. [This was written in the early 1960s, when the old formations of forwards, half-backs and full-backs were still very recognisably in use, and those were the positions usually assigned to the team members in polo. A match lasts one hour, divided into periods of play (chukkers, alt. spelling chukkas) and during the intervals ponies are changed. Ed.]
‘Offside’ was abolished in 1910, and handicapping introduced. [A player was said to be offside if he played the ball, it having been struck to him when he was in front of the striker. Players were given a handicap of so many goals: the maximum is 10. The difference between the sums of the handicaps of two teams represents a margin by which the team with the higher handicap must beat the lower, merely to draw. Thus if a team of crack Argentine players whose combined handicap is, say, 30 is playing a team of lesser players whose combined handicap is no more than 24; then the Argentine team must score at least seven goals more than the other side to win. The present Prince of Wales, who has just decided that he can no longer play competitive polo, had a handicap of 4. Ed.] The periods of play were shortened from ten to eight minutes, seven periods being played instead of six.

Up to 1909, the best polo ponies were bred mostly in Ireland, England and Australia, the latter going chiefly to India, where country-breds were largely relied on, very good animals not more than 13.2 (cf “The Mares’ Nest” from Departmental Ditties, v. 2, lines 5 & 6:

Then Arabs were bred, later to be superseded by ‘walers’ from Australia (so named because they came mostly from New South Wales) which in India could only be beaten by the best country-breds and Arabs when the height was raised to 14.1 in 1902. Of recent years the Argentine pony has come into its own and is as good as can be obtained anywhere. The best ponies, whatever their nationality, are thoroughbred or nearly so. A thoroughbred sire and a dam, if not quite thoroughbred, of the old Irish stock, probably results in the best breeding.

In 1909, English polo players got an unexpected shaking up from the Americans at Hurlingham. The Americans had never recognised the offside rule, and played in consequence a faster game. They used strokes hardly ever attempted elsewhere; hitting under their ponies necks instead of using backhanders from the sides of the ground. They hit harder and passed more accurately. In them the science of attack was well developed, they galloped faster and were more accurate goal-hitters. This led to the assimilation of the rules on both sides of the Atlantic. The offside rule was abandoned, the Americans took over the British rule permitting hooking of mallets (sticks), and the handicap system was adopted by the British.

Today (1964) the Argentines are the undisputed leaders of the Polo world.