The edited text corresponds to that first published in the Pioneer of 4 March 1890.

Kipling continues his journey from Salt Lake City (Utah) through Colorado and Nebraska to reach the city of Omaha. This Letter covers the section through the latter two States.

The railway company was the Denver and Rio Grande Western Railway, a narrow gauge track at the time, which enters Colorado just before the confluence of the Grand and Gunnison Rivers. At Grand Junction, Kipling must have taken the line that runs south-east through Delta to Montrose where it branches east by Black Cañon to the town of Gunnison. After this he continues to Denver, and then across Nebraska to Omaha.

[Title, Page 141] Ellewomen Hollow people, like the garments in the Omaha funeral parlour. ‘Ellewomen’ occur in “Iduna’s Apples of Youth, Part IV, Through Fire and Flood” in The Heroes of Asgard by A.& E Keary., a re-telling of stories from Norse Mythology (1891 edn.) The Ellewomen are described as the servants of the Giant Thiassi who is holding Iduna captive:

At length Iduna, looking more narrowly at them, saw, when they turned their backs to her, that they were hollow behind; they were, in truth, Ellewomen, who have no hearts, and can never pity any one.

There is also an anecdote in The Ogilvies by Dinah Maria Craik (1875) where:

There is a German fairy fable of the Ellewomen, who are all fair in front, but if you walk round them, hollow as a piece of stamped leather.

[Page 141, line 2] Bolan Passes The Bolan Pass lies between Sibbi and Quetta in modern-day Pakistan. Kipling also refers to it in Letter XXXI and in “The Man who would be King”.

A rail line runs through the Bolan Pass which still appears on Pakistan’s railway map. See this web-site. 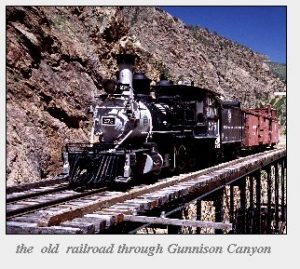 The actual Canyon lies between the towns of Crawford and Montrose with the Gunnison River flowing through it. The town of Gunnison is about 55 miles due east.

[See this site for maps and photographs of the Canyon].

[Page 142, line 24] jovine a reference to the disguise as a bull adopted by Jove or Jupiter (Roman) or Zeus (Greek) in order to seduce Europa.

[Page 143, line 2] half-dead city This is identified by David Stewart as the town of Gunnison. The Denver and Rio Grande Western Railway crossed the [Great] Divide over Marshall Pass, one of the highest in the Rockies. In Kipling’s time, the track was narrow gauge. L.E. Mooney, “Kipling, Caroline and Colorado” 1970 Denver Westerners Brand Book, Denver 1971. [ D.H.S.]

Nowadays much of the railway Kipling travelled has been submerged by a hydro-electric schame, but Gunniston has come back to life. 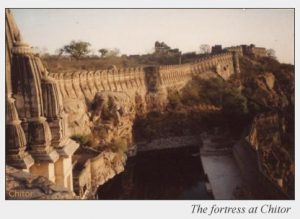 [Page 143, line 13] Amber or Chitor are two cities in Rajputana (Rajasthan) that had been visited by Kipling in his 1887 tour of the area. See Letters of Marque Chapter III (Amber) and Chapters X and XI (Chitor).in Volume I of From Sea to Sea..

[Page 143, line 22] Elijah Pogram a character from Martin Chuzzlewit by Charles Dickens (1812-1870). A quotation from Chapter 34 gives an indication of the kind of man he is:

‘Mr Pogram … is a public servant, sir. When Congress is recessed, he makes himself acquainted with those free United States, of which he is the gifted son.’ 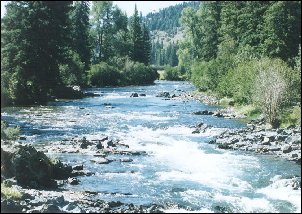 One of the great attractions of the area today is the splendid fishing to be had.

[Page 145, line 27] Next day . . . this Editor thinks that that some of the passengers, including Kipling, changed to the Union Pacific System to make their way to Denver.

[Page 147, line 24] Omaha, Nebraska on the Missouri River, the eastern border of Nebraska and adjacent to Council Bluffs.

[Page 149, line 13] … and for women look at this! no comment other than to draw attention to the title of this Letter and the aptness of the allusion to the undertaker Gring and the Ellewomen.