Kipling gave his inaugural address as Rector of St Andrew’s University on 10 October 1923, on the theme of “Independence”. As recorded in Leonee Ormond’s Notes on that speech in this Guide:

On Kipling’s arrival by train on 9 October he had been greeted by a large group of enthusiastic students who persuaded him to give an impromptu speech. He gave another on arrival at University House, to which the students had pulled him in triumph.

This welcome by the young, and the fact that the Rector is elected by the students themselves, seems to have touched Kipling deeply. In the last verse he says:

The frost at his heart shall be broken.

So we can see the whole experience at St. Andrew’s as part of the healing of his grief for the death of his son John in the Great War, eight years before. This poem is a record of his gratitude.
J M S Tompkins (p. 223) observes:

Swinburne, one of his many masters in metre, reappears, as the stars of our morning have the habit of doing, in his evening skies. When, against all his expectations, his inauguration as Lord Rector of the University of St. Andrews broke up, as he says, the frost at his heart and changed and renewed his spirit, it was in the style and verse of Swinburne that he greeted the city and its young men:

And the roar of the wind shall refashion
And the wind-driven torches recall
The passing of Time and the passion
Of Youth over all.

The poem is in the metre of Swinburne’s “Dolores”. Kipling had used it in his “morning”, while he was still at school, in “De Profundis”, published in the United Services College Chronicle in July 1881 and collected by Andrew Rutherford (Ed.) p.66. 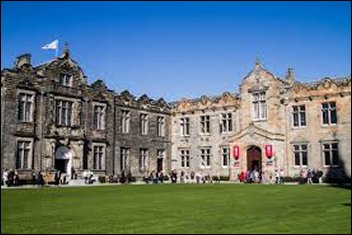 With naught for fresh faith or new trial/ With little unsoiled or unsold the speaker is feeling old, expecting nothing new and feeling that most old things are dirty with age.

Can the shadow go back on the dial? Can time go backwards? An echo of 2 Kings 20.11: And he brought the shadow ten degrees backward, by which it had gone down in the dial.’

The heart of a man to be taken –/ Taken and changed unaware. Unexpectedly, something new has happened and the speaker’s heart has been changed.

As he tenders his vows Kipling had to take an oath when he became Rector.

The far, guarded City St. Andrew’s is about 50 km north-east of Edinburgh and some 550 km north of London.

Her/She in the rest of the poem, these refer to the City and University.

The … Ocean beside St. Andrew’s is on the coast of the North Sea.

The full centuries St. Andrew’s is the oldest University in Scotland, founded in 1413.

The frost at his heart shall be broken See the note above on the poem.