[Page 197, Title] ‘Prentice an abbreviation for apprentice, a young person who is formally bound to serve a master / instructor for an agreed number of years to learn a trade or craft.

[Page 197, line 3] D.I.R. based on the East Indian Railway, the first line of which opened in 1854 and later comprised a standard-gauge line from Calcutta to Delhi with branches to Ranigan, Gaya etc, and Allahabad to Jabalpur, a junction with the Great Indian Peninsular Railway. (This was only 24 years after the opening in 1830 of the world’s first inter-city railway, from Liverpool to Manchester, built by George Stephenson). [Harmsworth’s Encyclopedia, Volume 3, p. 2053]. See “Among the Railway Folk” in From Sea to Sea Volume 2. For a photograph of the yard in 1897, see Satow & Desmond, p.73.

[Page 197, line 4] Young Ottley the child of European parents but born in India where he acquired the characteristic lilting accent discussed in “The Comprehension of Private Copper” (Traffics and Discoveries) See also C A Bodelsen, p. 158.

[Page 197, line 10] Ajaibpore Jamalpur in “Among the Railway Folk” Chapter 1, workshops of the East Indian Railway and capital of the District of the same name.

See Satow & Desmond, p. 35 for reasons for selecting this locality for the workshops – one being a good supply of local labour accustomed to working in metal and and another the fact that an isolated site away from the distractions of a town would make the employees more dependent on the company. Here also is located the Institute of Mechanical and Electrical Engineers, established in 1888.

See also “The Giridih Coalfields” (From Sea to Sea Volume 2, p. 304.) There is another town with a similar name and various spellings, on the line from Calcutta to Allahabad.

[Page 198, line 8] nuts in this context the (usually) hexagonal pieces of metal with an interior screw thread that screw onto bolts for fixing metal when not riveted.

[Page 200, line 18] Drivers’ Provident Association a form of insurance club whereby members paid a regular subscription and were assisted when ill and so off work.

[Page 200, line 19] D.I.R. Volunteer Corps it was usually a condition of service for the men to belong to the Railway Volunteers (Satow & Desmond, p. 36)

[Page 201, line 2] The Art of Road-Locos Repair or the Young Driver’s Vademecome. A vade mecum, from the Latin, literally meaning ‘go with me’, is a small handbook intended to be carried by the owner at all times as a ready reference. In his preface to this story Kipling says that there was such a book, but we have not been able to trace it. [Information from readers would be appreciated; Ed.] .

[Page 202, line 28] Agra The ancient Moghul capital in Rajasthan, the site of the Taj Mahal, and mentioned in Kim.
Bandikui a railway junction between Agra and Jaipur, further to the west.

[Page 203, line 9] General Pass Directors of railway companies and some others had the privilege of free travel and wore a token on their watch-chains, as a ticket which would take them anywhere.

[Page 203, line 12] cup-hunting in this context, competing for a silver (or plated) trophy awarded to the winner of a match.

[Page 204, line 12] Parsee a follower of the religion Zoroastrianism. The Parsees fled from Persia to India in the 8th Century. One of them, Pestonjee Bomanjee is immortalised in “How the Rhinoceros Got his Skin” (Just So Stories.) See also Green, Kipling and the Children, p.24.

[Page 204, line 18] crown-sheet the upper plate of the locomotive’s firebox.

[Page 205, line 24] between the spokes of the right-hand driver this indicates an engine with inside cylinders. 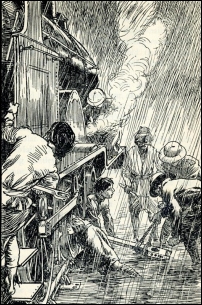 [Page 207, line 11]…the men crawled and knelt and levered and pushed and hauled and turned spanners under the engine… (right)

[Page 208, line 7] bottle-imp an echo of the story by Robert Louis Stevenson (1850-1894): ‘a … bottle with a long neck; the glass of it was white like milk with changing rainbow colours in the grain. Withinsides, something obscurely moved, like a shadow and a fire…’ . Philip Mason uses the image for the title of his book Kipling, the Glass, the Shadow and the Fire.

[Page 208, line 24] stoked … spreading them thin it is important to have a thin even layer of coal burning brightly in a boiler. In steam locomotives there was a stoker on the footplate. shovelling coal continuously into the furnace.

[Page 209, line 4] distant signal usually a quarter-mile or so ahead of, and showing the same as, the home signal, so warning the driver if he has to stop.

[Page 209, line 21] switch in this context the lever that works the ‘points’ to transfer the train to another line.

[Page 209, line 23] forty-five-ton, six-wheel, coupled etc. a large engine for the period but we have not traced it.

[Page 212, line 27] Raneegunge See “In the Giridih Coal-Fields” (From Sea to Sea Volume 2. p. 307.)
Calcutta then the capital of India, on the River Hugli, the subject of “An Unqualified Pilot” earlier in this volume.