First published in the American magazine Youth’s Companion for 19 September 1895 (Richards p. 132) and first collected in Volume XIV of Macmillan’s Edition de Luxe of 1899 (The Day’s Work II) and later in Land and Sea Tales (1923) where it is accompanied by the verse “The Nurses”. It is also included in the Sussex Edition Volume 16, the Burwash Edition, Volume 14, and Scribner’s Volume 35.

Young Ottley is an apprentice in the workshops of one of the biggest Indian railway companies. Like many young men in the age of steam, his ambition is to be an engine-driver.
He makes friends with Olaf Swanson, a notable driver, who has written a manual – his ‘vademecome’ – on how to repair damaged locomotives. Olaf makes Young Ottley – despite his protests – learn long passages from it by heart.

Then, one night, in the rainy season, he is on his way to a rifle competition as a passenger, when one of the cylinders on the train’s locomotive blows up. The driver, fearful for his life amidst steam and scalding water, will do nothing. But Young Ottley, mustering the help of a squad of British soldiers, and remembering Olaf’s book, disconnects the wrecked cylinder and takes the train on across Bengal in the darkness, through pouring rain and flood. Olaf, who is delighted, sings Young Ottley’s praises, and as the story ends he is taking out his first engine, as a driver. 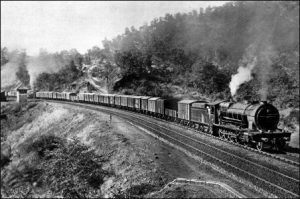 The first section of the Great Indian Peninsular Railway  from Bombay to Thana (20 miles) was opened in 1853 (Satow & Desmond, p. 6) after some six years of discussion. In the decades that followed an extensive network of Indian railways was built, revolutionising the possibilities of travel for ordinary folk.

By 1880 there was a route mileage of about 14,500 km (9,000 miles). Kipling himself observes in this story that Olaf Swanson’s Road Locos Repair or the Young Driver’s Vademecome was a well-known book in its time.