[Page 27, initial] This drawing imitates Mexican art. The main figure’s bird costume is Mayan, and its flanking figures are probably jaguars (see the

“The Beginning of the Armadilloes”). The elongated figure around the top may be intended for the plumed serpent Quetzalcoatl: both this and the jaguar were important religious symbols.

[Page 27, line 4] Parsee Descendant of refugees who settled in India after the Arab invasion of Persia in the 7th-8th centuries. Followers of the sage Zoroaster, they worship God in the forms of light and fire. The founder of the Bombay School of Art, where Kipling’s father was employed at the time of his birth, was a Parsee called Sir Jamsetjee Jeejeebhoy.

The hat would have been a cap resembling a European hat without a brim, sloping backwards from the forehead, made of stiff, shiny material with a diapered pattern.

[Page 28, lines 5-6] the three buttons In St Nicholas Magazine, the skin “buttoned up the back”, and so the buttons appear in Herford’s drawing. 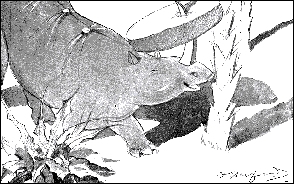 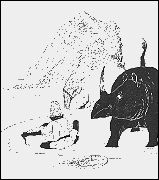 [Page 28, line 14] Pestonjee Bomonjee This was the name of a real Parsee who was one of Kipling’s father’s students at the Bombay School of Art, afterwards a well-known artist (Kipling Journal, 45, March 1938, p. 24).

[Page 31, lines 18-9] Mazanderan, Socotra … Larger Equinox
Mazanderan is a province of Iran, lying between the Caspian Sea and the Elburz mountains.
Socotra is an island in the Indian Ocean, off the Horn of Africa, about 150 miles east of Cape Gardafui.
The Promontories of the Larger Equinox is a nonsense phrase.

[Page 31, line 22] Sloka A distich that should consist of two lines of sixteen syllables each or of four octosyllable half-lines. It is the chief verse-form of the Sanskrit epics. In St Nicholas Magazine, only the first and last lines were given.

[Page 36, lines 24-6] Oratavo … Sonaput These names are all imaginary, but have echoes of the names of real places. For instance, Sonapur in India; Antananarivo, the capital of Madagascar, later called Tananarive; Orotava, a port in Tenerife in the Canary Islands.

– where all small people – beginning to breathe slowly and evenly – must inevitably accompany him – in order to arrive easily and unknowingly – at the enormous battlements of the luxurious city of Uninterrupted Slumber.

One might compare the poem “The City of Sleep” in “The Brushwood Boy,” in The Day’s Work.