There is a version handwritten by Kipling in Notebook 1, dated 26 January 1883. This is the first of Kipling’s poems with an Indian setting to be firmly dated. A later marginal comment reads “Skittles [nonsense] but catchy.” See Rutherford pp. 24-28 for details of the Notebooks. 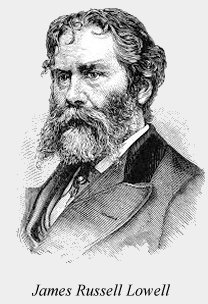 The poem is a direct crib of James Russell Lowell’s “The Pious Editor’s Creed” (though Lowell wrote in American dialect). Lowell (1819-1891), the American poet, critic and editor, is possibly best known for The Biglow Papers (1848) from which this satirical poem comes. Lowell had been a vigorous campaigner against slavery, and was at this time American Ambassador to the United Kingdom. Kipling uses the same verse-form and rhyme-scheme as Lowell, the recurring “I do believe”, and in the opening lines almost the same words.

“Sub” in the title is “Sub-editor” – Kipling’s role on the Civil and Military Gazette as ‘fifty percent of the editorial staff of the one daily paper of the Punjab.’ (SoM p. 40) That this poem was written some twelve weeks after young Kipling took up his post indicates how quickly he had adapted to the hard realities of his job, a far cry from the USC Chronicle.

It also prompts the interesting question of whether Kipling had a copy of The Biglow Papers with him in Lahore, either taken out from England or in his father’s library, or whether he had simply memorised much of the style and substance of Lowell’s poem.

I do believe in Afghan wars / (As far away as Peshin is)
The first lines of Lowell’s poem are: ‘I du believe in Freedom’s cause, / Ez fur away ez Payris is.’

Peshin one of the furthest forward posts retained by Britain on the North-West Frontier after the 2nd Afghan War of 1878-81. The sub-editor likes distant wars because he can fill the paper with made-up details without fear of accurate news to contradict them, while rival papers think he has access to secret information.

thirteen hundred copies presumably the print run of the Civil and Military Gazette.

Wheeler Stephen Wheeler, editor of the CMG, was a hard taskmaster and no “eternal pal” for Kipling. In Something of Myself pp. 40/41, he writes, some fifty years later:

My Chief took me in hand, and for three years or so I loathed him. He had to break me in, and I knew nothing. What he suffered on my account I cannot tell; but the little that I ever acquired of accuracy, the habit of trying at least to verify references, and some knack of sticking to desk-work, I owed wholly to Stephen Wheeler. I never worked less than ten hours and seldom more than fifteen per diem; and as our paper came out in the evening did not see the midday sun except on Sundays …

scrap short item contributed to the paper by the editor or sub-editor.

gup gossip. As in verse 1, he wants to make his paper appear better informed than its rivals.

babu educated Bengali. In this instance the editor of an Indian paper.

‘darn side’ pun on ‘darn sight’, ‘side’ meaning conceit. (Rutherford)

I do believe in Earthquake shakes/And tickets compliment’ry. The sub.
likes earthquakes because they give him news to fill the paper. As a reporter he gets free entry to report on certain events.

Loose captives from captivity perhaps a reference to the decision by the Viceroy in January 1883 to free the surviving Wahabis (members of a fanatical Muslim sect) who had been sentenced to transportation for life in 1864; or to the decision of the Madras High Court that month to quash the convictions of some alleged ringleaders in religious riots in Salem, Tamil Nadu. (Rutherford)

give it he give it him, scold him. The wrong case of “he” is dictated by the need to rhyme.

Some improbabilities reported to the paper which they are glad to print to fill up space.

tiger skins/From fourteen feet to twenty hunters exaggerating the size of their kills. In Kipling’s story “The Tomb of his Ancestors” John Chinn measures the tiger he has shot: ‘Ten-six-eight …. call it eleven.’ (The Day’s Work, page 145, line 18). Our entry in this guide notes: The tiger measured nearly eleven feet from its nose to the tip of its tail (3.3 meters), and a short tail (37 inches, 94 cm) at that. This was an immense beast, larger than most.

I do believe in ‘monster’ leaps / By ‘liliputian’ horses Small horses clearing massive obstacles. ‘liliputian’ refers to ‘Liliput’, a land of tiny people in Gulliver’s Travels, by Jonathan Swift (1667-1745).

Cutting items from other publications and pasting them into blank spaces helps to fill the paper.

The Indian Civil List an official publication which listed Government officials and their positions in the hierarchy.