This is a good example of a literary device which Kipling makes much use of, prose and verse which complement each other, displayed to great advantage in Just So Stories, The Jungle Books, Actions and Reactions, and elsewhere. Here we have the animals discussing their lives with the narrator and then singing what would now be called their theme-songs.

His two reports, both entitled “To Meet the Ameer” appeared in tne Civil and Military Gazette of 31 March and 1 April, 1885.and are collected in Kipling’s India: Uncollected Sketches, 1884-1888, edited by Thomas Pinney. They are by-lined ‘from our Special Correspondent, Rawul Pindi’ (the spelling varies). Rawalpindi (modern spelling) was then an important military station on the North-West Frontier.

It was an unforgettable spectacle that Ruddy was to revisit in the short story “Servants of the Queen” (collected as “Her Majesty’s Servants.” Ed) and the accompanying poem “Parade-Song of the Camp Animals”, published in The Jungle Book. But his abiding memory was of the marching feet. In the three weeks leading up to the review he had despatched eleven lengthy articles to the paper, written in extremely trying conditions, so that by the time he came to write his two-column special on the review he was exhausted almost to the point of collapse. “Phantasm of hundreds of thousands of legs all moving together have stopped my sleep altogether” he wrote in his diary that same night Tuesday 7 April….

The phantasm stayed with him. It inspired the beat of marching feet which gives “Danny Deever” its relentless pace, and it was reanimated many years later in the mesmeric tramp-tramp-tramp to his poem “Boots”.

Perhaps also the moving legs seen in the story “In the Presence in A Diversity of Creatues. 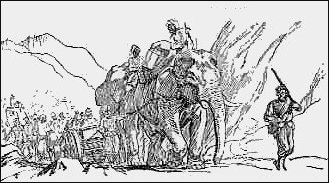 As explained in the story, the elephants haul the guns until the intelligent creatures realise that they are too near the firing-line, and so retire, while the more phlegmatic bullocks take over.

The rousing tune of this song fits Kipling’s words to the first two verses, “Elephants of the Gun-teams” and “Gun-Bullocks”. “The British Grenadier” was originally a marching song for the grenadier units of the British and Commonwealth armies, the tune of which dates from the 17th century. It is the Regimental Quick March of the Corps of Royal Engineers, Grenadier Guards, the Honourable Artillery Company and the Royal Regiment of Fusiliers.

See the note by Lt-Col Roger Ayers, RA. on Heavy Batteries in India.

Alexander Alexander the Great (366-323 B.C.) King of Macedonia and conqueror of—among other territories—Asia Minor (what is now Turkey), Egypt, the Persian Empire, Afghanistan, and much of the Punjab. One of the greatest generals of ancient times.

Greeks … first encountered war-elephants at Gaugamela in 331 BC … Although they were not used by Alexander the Great, war-elephants were used by his successors

In short, Alexander fought Indian troops who had elephants, but he did not use them in battle for his own troops.  Kipling seems to have  preferred to echo ‘The British Grenadiers‘ over strict historical accuracy.’ [D.H.]

Hercules the legendary Greek hero and son of Zeus

ten-foot team (over three metres) a good height for an elephant.

train in this context a column of animals carrying or drawing loads.

Their theme song echoes the second verse of “The British Grenadier”:

Those heroes of antiquity ne’er saw a cannon ball
Or knew the force of powder to slay their foes withal.
But our brave boys do know it, and banish all their fears.
Sing tow, row, row, row, row, row,
For the British Grenadier.

twenty yoke forty oxen harnessed, in pairs, to a wagon or gun etc., each pair wearing a wooden beam carved to fit their necks

To the Lords of Convention ‘twas Claver’se who spoke:
“Ere the King’s crown shall fall there are crowns to be broke;
So let each cavalier who loves honour and me
Come follow the bonnet of Bonny Dundee.
Come fill up my cup, come fill up my can,
Come saddle your horses and call up your men;
Come open the West Port and let me gang free,
And it’s room for the bonnets of Bonny Dundee.

“Bonnie Dundee” has been used as a regimental march by several Scottish regiments in the British Army.

brand The regimental number was normally branded on a front hoof. See “The Rout of the White Hussars”, in Plain Tales from the Hills (p. 236, line 19):

The Farrier-Sergeant said that he knew the Drum-Horse’s feet as well as he knew his own: But he was silenced when he saw the regimental number burnedt in on the poor, stiff upturned near fore…

But clearly some cavalry horses at least were also branded on the withers, the ridge between a horse’s shoulder-bones.

Lancers as the name implies, light cavalry armed with the lance – a long spear.

Hussars another type of light cavalry, armed with the sword. See “The Rout of the White Hussars” in Plain Tales from the Hills and “The Man who Was” (Life’s Handicap).

Dragoons Originally mounted infantry, but by the 19th century, light cavalry, armed with the sword.

“Stables” the period allotted to grooming, mucking out and feeding cavalry horses and the trumpet-call that calls for it to begin.

“Water“ the trumpet-call for the horses to go to the drinking-troughs. – see “The Rout of the White Hussars” (Plain Tales from the Hills p. 238 lione 16 onwards).

break in this context to train a young horse or mule, and accustom it to human company and to obey commands.

handle here meaning to groom and generally look after. the animal.

This goes to the old tune of “The Lincolnshire Poacher”, which dates from the 1770s:

When I was bound apprentice in famous Lincolnshire
Full well I served my master for nigh on seven years
Till I took up to poaching as you shall quickly hear
Oh, ’tis my delight on a shiny night in the season of the year.

As me and my companions were setting of a snare
‘Twas then we spied the gamekeeper, for him we did not care
For we can wrestle and fight, my boys and jump out anywhere,
Oh, ’tis my delight on a shiny night in the season of the year.

“The Lincolnshire Poacher” was the regimental quick march of the 10th Regiment of Foot and its successors the Royal Lincolnshire Regiment and the 2nd Battalion Royal Anglian Regiment, who are known as “the Poachers”. Kipling’s last line, “And it’s our delight on a mountain height, with a leg or two to spare!” is a direct echo of the fourth line of the song.

Screw-guns were small guns that could be dismantled and the components carried on pack-animals which could travel in rough and mountainous country with no roads. See the notes by Roger Ayers on “Screw-Guns”.

pick our road the sure-footed creatures can ‘read the path’ much better than a man.

pack a load it is essential that the load on the back of a pack-animal is balanced and well-secured.

good luck … bad luck  This echoes some versions of the final stanza of ‘The Lincolnshire Poacher’: [D.H.] 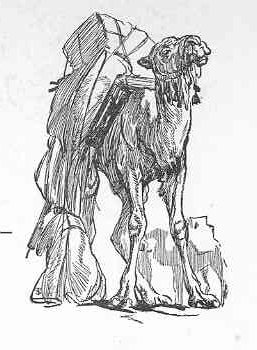 Commissariat the Department of the army that supplies provisions, ammunition etc.

hair-trombone a trombone is a brass wind-instrument, the notes are selected by moving a slide to and fro.

see notes on “Oonts” by Roger Ayers and the notes by Lisa Lewis on “How the Camel Got his Hump”, in Just So Stories.

ALL THE BEASTS TOGETHER

yoke the shaped wooden collar for oxen and other animals – also figuratively a badge of servitude.

goad a sharp implement for driving animals This elephant-goad (ankus) is illustrated by Lockwood Kipling in Chapter IX of his Beast and Man in India.

See also “The King’s Ankus” in The Second Jungle Book