First published in the twelfth number of W.E. Henley’s weekly Scots Observer (later to become the National Observer) on 12 July 1890.

The stanzas and refrain can be sung to the tune of the Eton Boating Song, which was written in 1862, the music being composed later by Captain Algernon H Drummond Rifle Brigade (1844-1932), whilst stationed in Lahore in the second half of the 1870s. See the Eton College website. It is quite possible that Kipling knew the song and he may have had the tune in mind when writing the poem.

In any case, the poem is eminently ‘singable’ to this tune, a quality that made it popular and it eventually became the unofficial song of the Royal Garrison Artillery (RGA), the branch of artillery to which the Mountain Batteries equipped with the screw-guns belonged after 1899. When the Royal Garrison Artillery and Royal Field Artillery were recombined as the Royal Artillery in 1924, it continued in this unofficial role. By the 1950s, it had semi-official status and those attending the Young Officers’ Course at the School of Artillery had to learn the words and were rehearsed in singing ‘Screw-Guns’ to ensure that they would be able to hold their own when it was sung after dinner at regimental dinner-nights, accompanied by a band. These dinner-nights were then a weekly event, now they are much more infrequent and band nights are even rarer but I am told that it is still sung with gusto when they do occur.
Subject Matter

In the ballad, Kipling has a soldier singing the praises of his own arm of the service. Since Kipling clearly sets the poem in his version of an ordinary soldier’s speech, it is a British gunner who is speaking, hence his unit must be a screw-gun battery of the Royal Artillery with British officers, non-commissioned officers (NCOs) and gunners; that is, one of the Mountain Batteries of the Royal Artillery and Royal Garrison Artillery of the 1880s and ’90s. These did rely on Indian muleteers but there were also Mountain Batteries of the Indian Army where all their NCOs, gunners and drivers (muleteers) were Indian and only some officers were British. These had a fine record of service and as some of the references in the poem are to their achievements, the poem can be taken to apply to them all.

While the title and much of the ballad are about the capabilities and effectiveness of the guns with which the battery is equipped, which are dealt with below, the main theme is the demand placed by mountain warfare and the capabilities of the mules on the men of the battery, which requires them to be ‘the pick of the Army’. Kipling lays particular stress on the fitness, toughness and steadiness required.

Kipling’s admiration for the Mountain Artillery is clear from two letters he wrote to Lieutenant W.H. Lewis RGA in 1911 and 1912. Kipling congratulated Lewis, whom he had met as an A.D.C. at Government House in Capetown in 1905, on being posted to 5 Mountain Battery, RGA in 1911, starting his letter with:

‘Loud and earnest congratulations! A mountain-battery is Some Guns and what I know of No 5 Mountain Battery is that it’s about as smart as they make ’em.’

‘I can’t tell you how glad I am that you like both the life and the country … Come to think of it, there is really nothing more complex than a mule-battery – I used to know one or two fairly well and the subs used to tell me that one could put in an honest 10 hours a day of work without doing too much.’

Kipling visited Lewis in 5 Mountain Battery RGA at Lyndhurst in the New Forest in 1914 and included a record of it in The New Army in Training – “Indian Troops”.
[Extracts from Kipling’s letters courtesy of University of Sussex Special Collections. The 1911 letter also appears in The Letters of Rudyard Kipling, Thomas Pinney (Ed.) vol IV.] .

The first recorded use of mules to carry artillery pieces in the British army was at the end of 1813 when French troops withdrew into the Pyrenees before Wellington’s advance. Small muzzle-loading 3-pounders were carried on pack mules by two small units, each with 3 guns and British and Portuguese personnel.

These units were disbanded in 1814 but a similar unit was raised by the Royal Artillery for the British Auxiliary Legion which fought in Spanish service in the Carlist Wars of 1835-39. It was equipped with small howitzers and Congreve rockets which were carried on mules. An officer of the Bengal Artillery who fought with this unit (whilst on leave from India!) took the idea back to India and by 1857 the East India Company Presidency Armies included a number of Mountain Trains with mule-borne light guns or howitzers, the forerunners of the batteries of the Indian Mountain Artillery, although carriage by elephant or camel was also used when more practicable.

When almost all Indian-manned artillery units were absorbed into the Royal Artillery or disbanded in 1859, following the sepoy rebellion of 1857, mountain trains were amongst the few retained and by 1877 the only remaining artillery batteries in the Indian Army were six Mountain Batteries, all Indian manned but with British officers. This number was increased to eight in 1886. Over the same period, batteries of the Royal Artillery were also equipped as mountain batteries as and when necessary. This was the position at the time Kipling wrote the poem. By 1899 the number of Indian batteries had been increased to nine.

In the same year the Royal Artillery was divided into three branches, Royal Horse Artillery, Royal Field Artillery and the Royal Garrison Artillery. The RGA was given responsibility for mountain artillery and 10 batteries were renamed and, where necessary, re-equipped as permanent Mountain Batteries, RGA, numbered from 1 to 10, for use wherever required. Most were stationed in India but both they and the Indian Army batteries were used elsewhere in the world when needed.
The Screw-Gun

Prior to 1865, all artillery pieces were smooth-bore muzzle loaders – in simple terms, cannon. Since a mule could only carry a about 200-250 lbs (90-114 kg,), mountain guns had to be small and those used in East India Company service in the 1850s were the brass 3 pounder gun and the very small 4.4 inch (11 cm.) howitzer, both carried as barrel, carriage and pair of wheels on three mules. Both fired solid shot or shrapnel to about 1000 yards (914 m.) and case shot at short range. (see our notes on “Snarleyow”, line 32), while the howitzer could also lob explosive shells.

The advent of rifled guns in the 1860s, although still muzzle loaders, gave greatly increased range and the gun which gave good service in the 1870s and well beyond was the 7 pounder Rifled Muzzle Loader (RML), a steel gun weighing 200 lbs (90 kg.) with the same choice of projectiles, plus a ‘star shell’ (illuminating) and a range up to 3000 yards (2740 m.) It could still be carried on three mules. Changes in the manufacture of gunpowder meant that a longer barrel was needed to achieve the velocity at the muzzle required for the same range. A longer barrel meant a heavier gun, for a 7 pounder (3.2 kg,) an increase to about 400lb (180 kg.), far too heavy for a mule.

A solution to the problem proposed by Lt-Col C.B. Le Mesurier, Royal Artillery, who served in India 1871 -76, was simply to build the gun in two halves – breech and chase, each of just about 200lb (90 kg.) – which could be rapidly screwed together on coming into action.

The idea was taken up by Armstrong’s Elswick Works, an independent armaments firm, which developed the idea as shown above, producing a number of guns for field trials in 1879. Four of these guns, manned by 1 Battery, 8 Brigade, RA, supported by two 7 pounders (3.2 kg.) of 1 (Kohat) Mountain Battery, became the first screw-guns to be used in action in a brief expedition against the Zaimukhts, an Afghan tribe located just north of the Kurram valley, which had harassed British and Indian transport in the war of 1878. Entering their territory on 8 December 1879, the expedition fought its way to the two principal towns of Zawo and Thal before withdrawing by the end of the month. The screw-guns proved their worth and the production of more was authorised, until eventually they replaced the 7 pounder in both British and Indian service – but not until the end of 1892.

Lt Col Le Mesurier had been in a position to appreciate this success as he was serving as Commander, Royal Artillery, to the Kurram District Frontier Force in 1878-79.

This screw-gun, heavier than the 7 pounder, had to be broken down into 5 mule loads (or camel loads, where camels were more appropriate than mules) which were, in the order in which they marched; Axle – the cross member that fitted under the carriage to take the wheels; Wheels – two iron-rimmed wooden wheels, 3 feet in diameter; Carriage – 2 steel plates with three cross members and a ‘shoe’ which rested on the ground; then the two parts of the gun, Breech and Chase. This is a cross-section of the assembled gun.

On going into action, the gun was assembled in the order in which the mules arrived, first the axle had the wheels fitted, the carriage was then placed on and secured to the axle, then the breech was rested, butt end down, on the rear end of the carriage and the chase (or barrel) was then screwed into the breech and hammered tight. The combined gun was then lifted onto the carriage and secured by caps over the trunnions.
It seems astonishing, but contemporary authorities agree that this could be done in twenty seconds in the field and one quotes 12 seconds for a detachment doing it against the clock. It may also be surprising today that the gun was manned by a sergeant and 8 men, but remember that wheels and the axle needed 2 men each to lift them, while the carriage, breech and chase needed 3 each, and the combined breech and chase, 5 men.
‘Limbering up’, that is, breaking down the gun and getting the bits back on the mules, was equally labour intensive.

The gun had no system for absorbing the recoil on firing except for a check rope that linked a spoke in each wheel to the hook at back of the trail. This would lock the wheels after rolling back a short way and the hope was that the gun would skid rapidly to halt. Not always achieved on rocky ground.

This next picture is of a detachment of Indian mountain gunners just completing the assembly, one standing ready with a hammer to tighten the screw. There are only 7 men in the picture as Nos 8 & 9 are bringing up the ammunition. 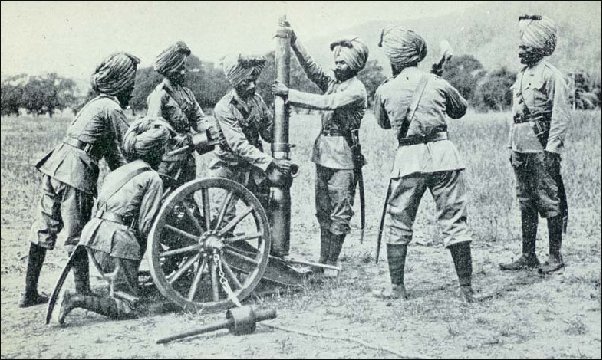 The mules were taken back a short distance to be out of the way and, if possible, put behind cover, but close enough to get back to the guns quickly if required. Almost as many men as were manning the guns worked in this area, preparing and taking forward ammunition, repairing equipment, tending mules (including shoeing), preparing and cooking food, and providing guards and reliefs. A 6-gun mountain battery had to be self-contained, so in addition to the 30 gun mules, it had another 30 carrying ammunition, 30 carrying spare parts, tools for artificer and collarmaker and tools and forge for the farrier, 30 mules to relieve the gun mules on long marches and 65 mules carrying rations, water and baggage and to provide additional relief. To look after these 185 mules there were 94 Indian muleteers, or ‘drivers’.

Kipling had a point when he said that: ‘ … there is nothing more complex than a mule battery’.
Conclusion

The Mountain Batteries continued to use the 2.5 inch (5,1 cm.) R.M.L. Screw-Gun up to and including the South African war of 1899 – 1902. By that time modern artillery was using smokeless propellant but the screw-gun still used gunpowder, one characteristic of which was that each round fired was accompanied by a dense cloud of white smoke. In an age of long-range, accurate rifle fire, this was literally lethal and a new, more powerful screw-gun, the 10 pounder, using smokeless propellant was rapidly introduced. 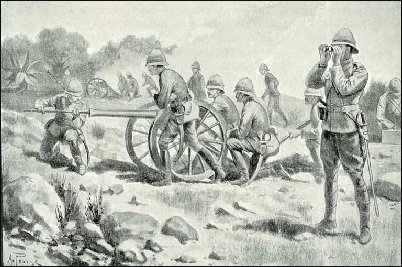 “Gone, but not forgotten.”