[Title] Screw-Guns Specifically, the screw-guns with which the Mountain Batteries of the Royal Artillery and the Indian Army were equipped at the time of writing, the 2.5-inch R.M.L. Steel (Jointed) Gun. See the Headnote.

[Line 1] SMOKIN’ my pipe Smoking on the march was allowed when a unit was ‘marching at ease’. See our notes on “Route Marchin'”, line 21.

mountings, mountains. Kipling gives the speaker his usual near-Cockney rendering of an ordinary soldier’s speech showing that the guns were served by British gunners. This indicates that the unit is a battery of the Royal Artillery and not the Indian Army. The leading senior NCO of a battery on the march would have been the No 1 of the first gun detachment, who may be imagined as the speaker. 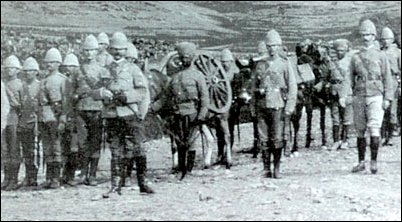 [Line 2] old brown gaiters Lace-up leather gaiters from ankle to just below the knee.This picture, which comes from a photo in Navy and Army Illustrated at the time of the Chitral Expedition in 1895, shows the loaded mules with Indian muleteers, British gunners and an officer – all with brown gaiters.

[Line 3] seventy gunners be’ind me Figures for the establishment of a Royal Artillery Mountain Battery of six guns in the 1880s vary but the gun handbook of 1888 gives 5 officers and 123 British Other Ranks, of whom 72 had the rank of Gunner, and 94 Indian muleteers. There were, of course, also 180 or so mules.

[Line 4] the pick of the Army The 1882 Soldiers’ Pocket Book gives 6 feet as the minimum height of a mountain battery gunner, 2 inches taller than the minimum height for the Foot Guards, since any three of them might have to lift a 200lb load from the 5 foot high (1.5 m.) mule saddle. In this respect and in the general level of fitness and stamina required, they were the pick of the army.

—’Tss! ’Tss! Carrington, in his notes on the poem, says this is: ‘The traditional noise made by men grooming horses or mules, to blow the dust out of their mouths,’ although it was also to calm the mule and let it know where the gunner was as he moved around it. Here, it also serves to complete the line, as does the addition of —hoo! hoo! to Line 6.

[Line 7] Jest send in your Chief an’ surrender (jest = just) A suggestion based on methods used to induce tribes on the North-East Frontier to cease fighting. In these tribes, such as the Naga and Lushai, major roles were played by heads of family groups and in the campaigns mentioned below, securing prominent family members as hostages for good behaviour was frequently resorted to.

[Line 11] Naga The Naga people live in Upper Assam, in a range of hills running roughly NE-SW parallel to the border between India and Burma (Myanmar). At the time of early contact with the British, they were headhunters and as tea plantations were being introduced to the plains to the south and west in the 1850s and ’60s they responded with numerous raids.

The small campaigns that followed these incursions were well before the introduction of the screw-gun, but more serious conflicts in the 1870s ended with the Second Naga Hills Expedition (1879-1880). Two mountain guns did play a significant part in it at the fall of Konoma, 20 November 1879, but, unfortunately for Kipling, they were the old one-piece 7 pounders and were carried on elephants. There was no action involving artillery between 1880 and 1890.

Looshai Similarly, the Lushai was another tribe on the North-East Frontier that had a history of indulging in local warfare and an expedition was sent against them in 1871-72. A second series of expeditions also proved necessary in 1889-90 to put a stop to them raiding and enslaving their neighbours but here again the two batteries involved, 6th (Jacob’s) and 7th (Bengal) Mountain Batteries of the Indian Army, were still equipped with the 7 pounder.

Afreedeeman An Afridi, a member of the most powerful of the tribes on the border with Afghanistan, very martial but considered at the time to be ‘rapacious, untrustworthy, and lawless by nature’. At the time, the Afridi were composed of eight clans constantly at feud with one another, the most powerful of which were the Adam Khel, Zakha Khel, Kuki Khel and Kamrai Khel, each with between 6500 and 5000 fighting men in the 1890s. Their territory lay directly to the south of the Khyber Pass and was bounded on the east by the border between British India and Afghanistan, so they were well placed to control the route through the Pass and indulge in raiding over the border. See Kipling’s “The Lament of the Border Cattle Thief”, one of the ‘Other Verses’ that accompanied Barrack-Room Ballads.

The Zakha Khel, mentioned in that poem, were the most troublesome and intractable of the Afridis and it was in a short campaign in 1879 that screw-guns were used against them for the first time, although it was to be by no means the last time.

One source used for the above was Across the Border, or Pathan and Biloch, (E.E. Oliver, Chapman and Hall, London, 1890). This book was illustrated by Rudyard Kipling’s father, John Lockwood Kipling, who included this drawing of a Khyber Pass Afridi.

built in two bits See description of the gun in the Headnote.

[Line 33] There’s a wheel on the Horns o’ the Mornin’, an’ a wheel on the edge o’ the Pit, A lyrical description of an extreme mountain track, rock face and peaks on one side and a sheer drop of hundreds of feet on the other.

the Horns o’ the Mornin’ A splendidly picturesque term which Kipling seems to have invented. John Whitehead suggests that it might have its root in the use in Psalm 139 of “the wings of the morning”.

the edge o’ the Pit From the description of a catastrophic situation as being ‘on the edge of an abyss’, where abyss meant ‘infernal pit’. (New Oxford Dictionary). 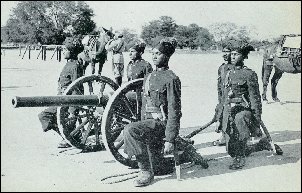 [Line 34] drag-ropes Two ropes, each attached to a hook on each end of the axle. Their primary role was to allow the detachment to manoevre the gun once it had been assembled, in particular to haul it into position over difficult ground. They can be seen in place on the ground in this photo on either side of the 2.5 inch screw-gun of an Indian Mountain Battery.

to hold the old gun in ’er place The other use of the drag-ropes was to use them to check the movement of the gun on firing, as it had no mechanism to absorb the recoil. With the screw-gun’s light carriage and narrow wheel track, this included checking sideways movement if necessary.

[Line 44] Out drag-ropes! With shrapnel! Hold fast—’ Part of the sequence of fire-orders specifying the use of drag-ropes and the ammunition to be fired. ‘Hold fast!’ is the order to the men holding the drag-ropes given just before the order to fire.

This 1895 picture is from Navy and Army Illustrated of 3 Mountain Battery, RA, this time in action, although it looks as though it has been carefully posed. The guns were served by a detachment of 9 men, commanded by the No 1, a sergeant. The No 2 can be seen about to ram home a shell in the nearest gun while No 4 ‘serves the vent’ (puts his finger over the firing vent to prevent a premature discharge while ramming).

The mule lines can be seen in the background where the rest of the battery waits with the mules and their drivers (muleteers).