The Indian Army establishment for 1890 provided for four Heavy Batteries, two Bombay, one Bengal and one Madras.

Each had 4 x 40 pounder rifled muzzle-loading (RML) guns, and two 6.5″ howitzers, manned by 4 officers and 88 Other Ranks, all Royal Artillery from the Garrison Artillery.

Transport by both elephant and bullock was provided by:

There was an unspecified number of Indian followers as grass cutters, conservancy (sanitary) orderlies and others.

The use of Elephants

Major General B.P. Hughes, in British Smooth Bore Artillery of the 18th & 19th Centuries, (Arms & Armour Press, London, 1969), comments that the most impressive means of draught that was ever used was undoubtedly the elephant:

…elephants were freely used in India during the 18th and 19th centuries. They are efficient and highly intelligent draught animals, and are surprisingly surefooted over difficult country. Their only disadvantage has been described as “a strong sense .of self-preservation”, as a result of which they are not reliable under fire. After one or two unfortunate incidents when elephants galloped off with the limbers immediately after the guns they had drawn had been brought into action, the Indian Armies abandoned their use in the forefront of the battle.

They were then used for the task for which they were eminently suitable—the draught of the heavy-siege equipments on the line of march. Elephants were used to draw the 18pr guns of the Siege Train on the way to Delhi during the Mutiny in 1857. Two elephants were normally used in tandem to draw each carriage, but the lead elephant was always ready to be unhooked, and to go round to push with his fore­head against the gun muzzle if the gun got stuck. 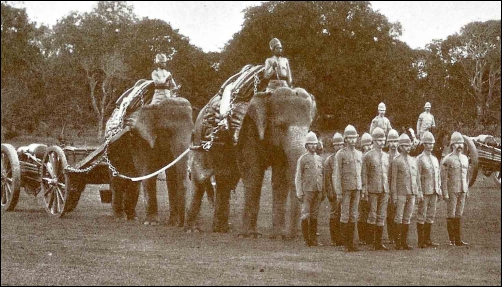 This picture is taken from Army Life in the Nineties by Philip Warner (Country Life Books, Hamlyn Publishing, London 1975) p. 119. It shows a ‘division’ (later a section) of two guns, each known as a sub-division, with the gun detachment of 8 men standing in front of the team.

In the rear are the two corporals who command the guns. Note how everyone is focused on the camera. 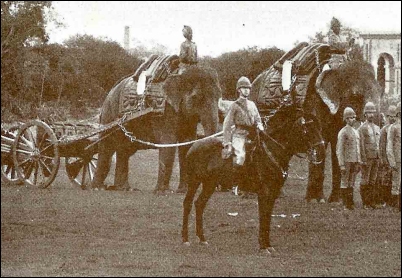 In the centre is
the subaltern
‘division’ commander.