This poem (ORG no. 531) was first published in the San Francisco Examiner on December 31st 1892, without a title, as a heading to “My First Book”, and in the Civil and Military Gazette on the same day. Also in Idler Magazine, English Edition for December 1892, and American Edition for January 1893, headed “Primum Tempus”. The Idler was a London monthly magazine, recently started, whose Editors were Robert Barr and Jerome K. Jerome. As its title suggests, its content tended to be light and amusing. It is collected in:

See David Alan Richards p. 93 for further details. There is a musical setting, by Leslie Fish.

I(n the second line of Verse 1, the original has: ‘and two-toed horses’ pelt;’ Inclusive Verse (1919) and the later editions have: ‘and woolly horses’ pelt’;

In the second line of Verse 3, the original version has: ‘ ‘Neath a hammer, grooved of dolomite, he fell..’ Inclusive Verse (1919) and the later editions have: ‘ ‘Neath a tomahawk, of diorite, he fell..’ Both were clearly dangerous weapons.

The poet reflects on the violent debates that story-tellers have engaged in over the many thousand years of man’s existence, and concludes that there are no absolute standards—no ‘right’ or ‘wrong’—in literary endeavour, no grounds on which one writer is entitled to savage another or another’s work.

As in the poems “The Story of Ung”, and “When ‘omer smote ‘is bloomin’ lyre”, Just So Stories which include “The Cat that Walked by Himself” and his speech in 1919 “The First Sailor”, Kipling is harking back to ancient or prehistoric times to express a modern message.

Ever since his ‘teens at United Services College he had experimented joyfully with forms and styles, borrowing from many earlier poets. In his mature years he remained a poet of many different voices. This piece was published while the Kiplings were establishing themselves in Brattleboro Vermont to accompany his article “My First Book”. In the two previous years, in which he had taken literary London by storm, he had resolutely refused to criticise other writers, and the principle that there are many different ‘ways of constructing tribal lays’ was deeply held.

Neolithic Age strictly the New Stone Age, dating from some 12,000 years ago, after the end of the last Ice Age in Europe. The term is commonly used of the time when men ceased to be “Mesolithic” (Middle Stone Age) hunter-gatherers and began to cultivate crops and domesticate animals.

Kipling set several stories in broadly this time: ‘The Knife and the Naked Chalk’ in Rewards and Fairies, and :‘How the First Letter was Written’ and :‘How the Alphabet was Made’ in the Just So Stories.

The first part of the poem is really set during the Ice Age, with pack-ice in the Bay of Biscay and reindeer and moose at the future site of Paris. So it is actually in the Old Stone Age or Paleolithic—but that doesn’t scan so nicely!

two-toed horses (original version) The modern horse is a single-toed animal, having evolved over the centuries from multi-toed forebears.

woolly horses (later versions) In the Ice Ages horses and many other mammals in what is now Northern Europe had woolly coats to protect them from the extreme cold.

Made the piled Biscayan ice-pack split and shove Kipling’s primal tribal bard seems to have been living in what is now France, since the Bay of Biscay lies off the west coast of France. The references to other places are mostly French.

troll a giant in Scandinavian myth.

gnome a goblin in Scandinavian myth.

dwerg a dwarf (from old Dutch), living deep in the earth.

Solutré an archaeological site in eastern France, some 10 miles west of the town of Macon, in the department of Saône-et-Loire.

It gave its name to the Solutrean culture, one of the subdivisions of the Old Stone Age, dated to about 21-17,000 years ago, and characterized by new stone implements and stylized symbolic forms of art.

diorite a very hard rock, difficult to work but it would make an excellent tomahawk. dolomite (in the original version) is another hard rock.

barbed and tanged a pattern of flint arrowhead

mammothistic etcher a mammoth was an elephant-like animal with a woolly coat to survive the cold. It became extinct at the end of the Ice Ages.

This prehistoric mammoth engraving is from La Madelaine, France, from Charles Lyell, The Antiquity of Man, 1873. Many carvings and paintings of mammoths have been found in the caves of central France.

Grenelle   In 1866, the archaeologist Édouard Dupont discovered a prehistoric lower jaw in the Trou de la Naulette, a cave near the village of Furfooz, Wallonia in the Belgian province of Namur.  This led to theories by palaeontologists about what they called the Furfooz race or Grenelle-Furfooz Men as the first anatomically modern people of the European Upper Palaeolithic.  We assume that ‘Grenelle’ offered the poet a better rhyme than ‘Furfooz’. [J.R.]

they The Gods, who control destiny.

When Alfred, Lord Tennyson, died in October 1892 he had held the office of Poet Laureate for 40 years… In August 1892 Gladstone had become Prime Minister and, looking around for a successor to Tennyson, could find no one….

In March 1892, just before Tennyson’s death, a well-known critic and historian, H. D. Traill, wrote an article for the Nineteenth Century on this very theme. He enumerated fifty contemporary writers in whose work he found some merit, but not one who could rank with the aged Tennyson.
Then, in a postscript, he apologised for having overlooked the muse of the new young man, Rudyard Kipling. For the sake of ‘ The Ballad of East and West’, he awarded Kipling the 51st place on his list, and thus Kipling became ‘a minor poet certified by Traill ‘.

Apart from any reflected glory from this reference by Kipling, he is now remembered mainly as the author of three lines from his parody of “Sister Helen” by Dante Gabriel Rossetti, “After Dilettante Concetti”:

My name is Used-to-was,
I am also called Played-out and Done-to-death,
And It-will-wash-no-more.

Ferren MacIntyre writes: ‘On the basis of nothing but some familiarity with Kipling’s other works, I have always assumed that this was mild sarcasm, rather than bragging. I think Kipling knew perfectly well that his poetry would outlast Traill’s undervaluing.

The reference, then, would be one of about 5 bits of poetic construction for the sake of meter and rhyme rather than theme. ‘Grenelle’, ‘Allobrogenses’ and ‘Amanuenses’, ‘plots were piled in lakes at Berne’, and ‘Traill’ all make for singability, but they are all strictly irrelevant.’ [F.M.]

aurochs European wild oxen, now extinct. The last auroch is believed to have died in Poland in 1627.

Allobrogenses a Celtic tribe of ancient Gaul (present-day France), located between the Rhône River and the Lake of Geneva.

plots In this context, ‘building sites’. 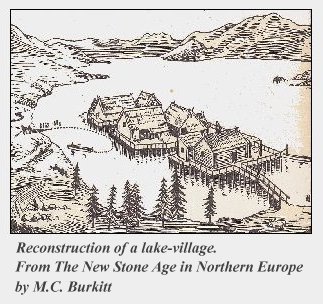 piled in lakes The first known prehistoric lake village was uncovered in Lake Zurich in 1854. Similar settlements have been found in other Swiss lakes.

Berne city in modern-day Switzerland. The most perfect surviving lake village is on Lake Moosseedorf, near Berne. The word ‘plots’ is a pun – plot of land on which to build, and plot of a story as told by the poet. Equally punning, as Mark Mandel has pointed out, is the use of ‘piles’, which can refer to stacked manuscripts or multiple interweaving plots in a story, or to the posts driven into the bed of a lake village.

dirk to stab with a dirk, a short dagger.

Kew A leafy part of west London, the home of the Royal Botanical Gardens, where they grow, with considerable difficulty, exotic plants, some of which which grow naturally and prolifically in Khatmandhu (the capital of Nepal).

Clapham In south-west London, known for its railway junction. In the nineteenth century it earned a reputation for piety when the Clapham Sect, which included William Wilberforce, Zachary Macaulay, and other philanthropists, lived there—long-forgotten today.

Martaban The Gulf of Martaban is an arm of the Andaman Sea in the southern part of Myanmar (formerly Burma). Martaban is also the name of a town and district in Myanmar.