ORG Volume 5, page 2513 records the first publication of this article (Uncollected No. 210) in the San Francisco Examiner of 18 December 1892, headed by “In the Neolithic Age” (Verse No. 531). It also appeared in The Idler Magazine for December 1892 entitled “Primum Tempus” with the same verse heading, and in the American edition of The Idler for January 1893; also in other magazines, including McClure’s, though the latter did not carry the verses.

“My First Book” was contributed to The Idler, the magazine
edited by Jerome K. Jerome and Robert Barr, where it appeared in
December 1892, preceded very suitably by the poem “Primum Tempus”
(better known in its revised version “In the Neolithic Age”), being
No. VII in a series of twenty-two similar articles by well-known authors
of the day.

My First Book This is Departmental Ditties, the “docket” (mentioned below), printed by the Civil and Military Gazette, in the style and shape of a Government office file, tied up with a bow of the pink tape that is called ‘red tape’. (Charles Carrington, p. 78.) published in 1886 and containing some items later included in more conventional and expanded editions of Departmental Ditties. See Martindell, page 9 for description and a photograph. The illustration at the head of the page is from the cover of the Third Edition of 1888.

steamer in this context a steam-ship

locked up to press the hand-set type is secured in a frame with wedges and placed in the press ready for printing. See “The Last Term” (Stalky & Co. p. 228) for Kipling’s first experience of the practicalities of type-setting.

breaking me into harness a metaphor based on the process of training a horse, by which the young animal is ‘broken’ to its rider’s will. (See Something of Myself p. 40, line 1.)

Elia … Lamb-like Charles Lamb (1775-1834) Essayist (right) best known for his charming Essays of Elia and for Tales from Shakespeare, written jointly with his sister.

sub-editing The process of selecting, cutting, and rewriting copy for publication, a basic journalistic task in newspaper production, highly skilled, but with little scope for creative self-expression. See Something of Myself p. 48.

Rukn-Din The Foreman in charge of the type-setters for the News pages of the CMG. See Something of Myself p. 41.

job side the commercial printing department, as opposed to the editorial side of the business – see Something of Myself, Chapter 3, “Seven Years Hard”. (The title is an echo of the times when convicted criminals were sentenced to Seven Years Hard Labour).

‘Pekin’ capital of China, now known as Beijing. Like the next six names, used here as the nom-de-plume of a writer who wishes to remain anonymous.

‘Latakia’ a port in Syria which exported a type of fine tobacco.

Bombay now Mumbai – the great port and capital of Maharashtra state, in western India. Kipling’s birthplace and mentioned in prose and verse – including “The Song of the Cities”

Chaaszee An Anglo-Indian tea-taster or buyer. Lays and Relays by Tung Chia (Forgotten Books, 2015) has two poems which include the term. Tung Chia was the pen name of John Otway Percy Bland (1863-1945).

China Ports enclaves of foreign influence in China between the 1840s and World War II., also known as ‘Treaty Ports’. They included, for example, Hong Kong and Shanghai.

Calcutta now known as Kolkata, capital of the Indian state of West Bengal, in eastern India on the east bank of the River Hooghly. For part of the year it alternated with Simla as the capital of India during the British Raj, until the seat of government moved to New Delhi in 1911.

Kipling’s visit to the city on his way home from India in 1889 is described in From Sea to Sea, Volume I page 211 onwards, and Volume II, p. 201. See also “An Unqualified Pilot” (Land and Sea Tales) and “The Song of the Cities.”

East India Company given a Royal Charter in 1600, the Company established trading-posts which developed into the Presidencies of Bombay, Calcutta and Madras. Charles Lamb (see above) was a clerk in the London office of the Company.

Possessing its own navy and army the Company ruled British India until 1784 when the Crown took a share in the Company, taking it over completely in 1857. The Company was dissolved the following year, after the Sepoy Rebellion, and Queen Victoria was proclaimed Empress of India in 1877. See “The Dream of Duncan Parrenness” (Life’s Handicap) and “The Tomb of his Ancestors” (The Day’s Work) p.102 line 23.

In a very short time ORG (Volume 8, page 5333) records this (as Uncollected Verse No. 532 in the text of Uncollected Prose No. 210, “ My First Story” (sic) apparently believing it to be by Kipling. The present Editors are not convinced that this is right.

The Long, Long Indian Day In this context ORG refers to Words by Mario, adapted to a German Volksleid, Bombay, 1889 (Volume 5, page 2514). We have no other information on this point.

Scanty Ninety-five Information will be appreciated 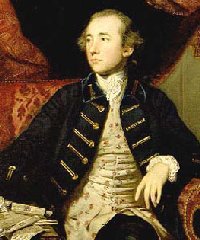 Warren Hastings (1732-1818) (right) the first
Governor-General of British India who established the civil administration that was the basis of Indian government for some two hundred years. He began his career as a Writer in the East India Company. See “The Dream of Duncan Parrenness” in Life’s Handicap.

Rangoon Also known as Yangon, the largest city and former capital of Burma..See From Sea to Sea, Volume I, Page 217. and “The Song of the Cities”.

Moulmein A seaport of Myanmar (formerly known as Burma).

Mandalay the second largest city and former capital of Myanmar, 445 miles (716 km) north of Yangon on the east bank of the Irrawaddy river, See the poem
“Mandalay”.

small books Echoes, verses by Kipling and his sister Trix (Beatrice) and Quartette, in the Civil and Military Gazette Christmas Supplement for 1885. (see Harry Ricketts, p. 63). Schoolboy Lyrics, a collection of Kipling’s juvernile verses, was seen through the press by his parents in 1881 before he returned to India. Rudyard was not pleased, as this was done without his knowledge or authority. (Ricketts, p. 40).

docket a word of several meanings, including a file of documents.

Aden a trading-port in Yemen at the Southern end of the Red Sea. See “A Return to the East”, in Letters of Travel, p. 220.

Singapore Then a British colony, now an independent island city-state at the southern end of the Malay Peninsula. (See “The Song of the Cities”).

Quetta The provincial capital of Baluchistan Province, Pakistan, and an important marketing and communications centre

Colombo Former administrative capital of Ceylon, now known as Sri Lanka, on the west coast of the island. These four cities, all within the British Empire at that time, are at the corners of an immense area of India, Asia, and China.

twelves as thirteens A publishers’ discount – echoed by the first line of “The Tour” (1904): ‘Thirteen as twelve my Murray always took’. (Like a ‘baker’s dozen’ by which you would buy twelve loaves and get a thirteenth one thrown in). Kipling’s dealings with the CMG Press were clearly conducted on strict business lines, and he enjoyed no such concessions

Hong Kong a trading port and former British Crown Colony. The territory was transferred to the People’s Republic of China in 1997.