This story was first published in Harper’s Magazine in December 1909, and collected in Rewards and Fairies the following year.

Away from their own valley, up on the South Downs with Mr Dudeney the shepherd, Dan and Una find Puck, and hear a story of the flint men who kept their sheep on these Downs three thousand years ago. In those days the wolves were the great enemy, and clumsy stone weapons were not very effective against them.

The Flint Man who accompanies Puck tells how he had decided to go to the people of the trees, who smelted iron in the Weald forest below the Downs, to ask them for ‘magic’ iron knives against the wolves. They agree to give him the knives, but first he has to sacrifice one of his eyes: ‘The God says that if you have come for the sake of your people you will give him your right eye to be put out.’

His eye is put out, and the knives are given. The flint men drive the wolves away, and the sheep are safe. But now the Man who has given his eye for the magic knives is treated like a priest or a god, and has to live in solitude till the end of his days. Only his mother will stay with him. ‘And yet, what else could I have done ?’, he asks.

For Kipling’s use of Norse myth and Christian imagery in this story see the Introduction. Sandra Kemp discusses it in Kipling’s Hidden Narratives, pp. 102-6:

In “The Knife and the Naked Chalk” the sacrifice of the Flint Man is also described in the language and imagery of the Bible: ‘It was for the sheep. The sheep are the people … What else could I have done?’ His anguished solitude and fear both before and after the putting out of his right eye resemble Christ’s in the garden of Gethsemane. `O poor – poor God’, says Puck as the Flint Man describes the effects of his sacrifice…

The story concerns not just the act of self-sacrifice, the dangers and difficulties involved along the way: `the Beast’ is more than a physical threat – inside as well as out, it represents the potential wholesale destruction of social meaning and identity.

…The end of the story confirms the Flint Man’s initial statement that `one cannot feed some things on names and songs’: `Nothing is left except the words and the songs, and the worship of a God. I would sell them all’, he says.

[Page 119, line 2] bare windy chalk downs The South Downs are grassy hills running east to west across Sussex, between the sea and the forest of the Weald, sheep country since time immemorial. Kipling’s house, Bateman’s, lies below the Downs in the Weald. See Michael Smith’s article on “The Sussex Landscape”.

[Page 119, line 19] the village water-cart Well into the twentieth century, before English roads were tarred, a water-cart would be sent round in the summer-time to spray the streets to keep down the dust.

[Page 122, line 18] a dew-pond A man-made pond, often on a hilltop, fed by the rain or the dew, for watering sheep and cattle where there are no streams or springs. 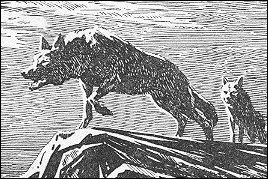 [Page 123, line 10] The Beast The wolf (canis lupus), a fierce predator which hunts in packs, was common in the wilder parts of the English countryside in ancient times, and a menace to men and their live-stock.

[Page 123, line 16] like a thrush with a snail’s shell The thrush, a familiar song-bird in English gardens, catches snails by hammering their shells against a stone till the shell breaks.

[Page 124, line 30 et sequ.] the Children of the Night Because there were deposits of iron ore in the Wealden forest, and ample wood to make charcoal for smelting, the Weald was probably one of the earliest places in Britain in which iron was made to replace flint. This was a technological revolution as momentous in its day as the invention of the computer in the twentieth century, and as new and strange.

In its earliest days the process of making metal from the earth must have seemed a magical secret, to be jealously guarded. Indeed from that time to this, smiths have tended to be men set apart, practising their mysterious craft in secrecy. Kipling is suggesting this separateness in calling the people of the Weald “The Children of the Night”.

[Page 125, line 28] the naked chalk The Downs are chalk hills, with a thin covering of grass, and few trees.

[Page 132, line 5] give him your right eye
See the Introduction.