[Page 133, Heading] Houyhnhnms (pronounced ‘whinims’ or ‘whinhims’), a race of horses with the finer characteristics of men, introduced by Jonathan Swift in Gulliver’s Travels (1726) with satirical effect. The name, invented by the author, is intended to imitate the whinny of a horse. See also chapter XII, page 108, line 31.

[Page 133, line 4] ‘to see Nabobs’ the quotation has not been traced by this Editor. It was thought to come from one of W.M. Thackeray’s works (1811-1863) but has not been found. A Nabob was the term applied in England to wealthy Anglo-Indians. It originally derived from the Mughal title Nawab, the delegate of a Supreme Chief. [DP]

[Page 133, line 6] Oudh Taluqdar Oudh province borders Nepal and includes the cities of Lucknow and Benares (Varanasi). Hobson-Jobson records that: ‘the famous Talookdars of Oudh are large landowners, possessing both villages of which they are sole proprietors, and other villages, in which there are subordinate holders …’ [DP]

[Page 133, line 19] Raika-Bagh or Rai Ka Bagh is close by the Railway station of the same name. It now houses Government offices whilst the Rajmata Krishna Kumari Girls’ Public School has been built in the former picnic grounds of the palace.
[Page 134, line 22] Maharaja Kanwar, the Crown Prince  He was actually succeeded by Maharaja Sardar Singh who ruled from 1895-1911. [DP]

[Page 135, line 3] Ulster A long, loose, rough overcoat (right), so named as the material was made in Northern Ireland; not usually worn nowadays but then regularly in use in England.

[Page 135, line 7] growing line a railway being built or an old one extended.

[Page 135, line 7] shot for Udaipur he shot the boar as a gift for the Maharana Fateh Singh of Udaipur. Chapters VII to IX. [DP]

[Page 135, line 25] Where did you shoot it? the writer meant in what part of the State did he shoot the wild-boar (pig), but the answer he got was the correct one in England and presumably in most other shooting countries, i.e. in the heart.

[Page 136] In the following paragraphs several horses are named. No comment is made on most of them but one or two are of sufficient historic interest to give the source of the name. 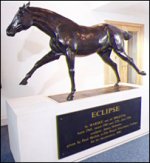 [Page 136, line 24] Eclipse a famous race-horse born during an Eclipse of the Sun in 1764. He died in 1789. He was never beaten. His owner Colonel O’Kelly, an Irish adventurer, on one occasion at Winchester said, rightly: ‘Eclipse first and the rest nowhere’.

[Page 136, line 26] Shere Ali the name of the son of Dost Muhammed, the Amir of Afghanistan, who succeeded in 1868. When Dost Muhammed died in 1863, the succession was left open for five years. In 1878 Shere Ali received a Russian envoy and refused to see a representative of the Viceroy contrary to the Treaty. Passage through the Khyber Pass was then demanded and refused and war followed in November. Shere Ali died in Russia three months later. He was succeeded by his second son, as the elder died just before the war.

[Page 136, line 27] a maiden of Abdul Rahman’s a horse purchased from the horse-dealer Abdul Rahman which at the time Kipling was writing had not won a prize – possibly not been first in a race. 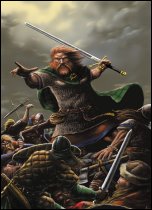 [Page 136, line 30] Brian Boru is the usual name of Brian, King of Ireland (922-1014), son of a chieftain of Munster. In youth he fought the Danes. Having avenged the murder of his brother the King of Munster, he succeeded him in 978 and thereafter forced the tribes of Leinster and Munster to acknowledge his sovereignty, finally defeated the Danes, marched into Dublin and forced the High King of Ireland, who ruled in Meath, to bow before him in 1002. Having next subjected Connaught and Ulster, he was generally acknowledged as the High King. After his victory at the Battle of Clontarf he was murdered in his tent and buried at Armagh.

[Page 138, line 19] Pelhams these are a form of bit combining the bit the curb and the snaffle.

[Page 139, line 15] barb a horse of the breed imported from Barbary and Morocco, noted for speed and endurance.

[Page 140, line 32] Bellara no place of this name has been found within 80 miles or Jodhpur or elsewhere in India. 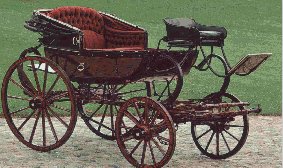