First published in Departmental Ditties and Other Verses, second edition, 1886..

The poem does not figure in the later editions of Departmental Ditties in India or Britain. It was included as a Departmental Ditty in the ‘Early Verse’ volumes of the Outward Bound Edition and the Edition de Luxe, but not in later collections until Sussex and Burwash. It is also to be found in Andrew Rutherford’s collection of ‘Unpublished, Uncollected, and Rarely Collected Poems (1986).

A highly educated young man, St Vincent Clare, B.A., follows his father into the Indian Civil Service, the I.C.S., an elite and highly competitive corps, sometimes called the ‘heaven born’. At first he gets on with his work, and soon rises in the service in Simla, but becomes ‘a rather conceited prig’. After giving him the chance to improve, his colleagues – presumably his seniors – decide that he is ‘impossible’ and no gentleman. He is cast out from the central administration to an uncomfortable post in the Plains, falling as swiftly as he had risen.

Officials in the corridors of power in the Government of India, an elite minority governing a vast strange land, carrying a heavy load of work, depended a good deal on working closely with others. We do not know whether the high-flown name in the poem conceals a real case that Kipling’s readers would have recognised, or whether he is simply highlighting the perils of offending one’s colleagues.

Kipling himself had not been to a university, and tended to be sceptical of the merits of academic brilliance.

Lucifer The name means the morning star, the giver of light. In ancient tradition Lucifer was a fallen angel, cast out of heaven. Isaiah 14,12 has:

How art thou fallen from heaven, O Lucifer, son of the morning ! How art thou cut down to the ground. which didst weaken the nations !.

In Christian tradition Lucifer came to be identified with Satan, who tempted Adam and Eve, as told in Milton’s Paradise Lost (1667), but it seems that here Kipling was only concerned with this young man’s fall.

that College late deported That has been sent out to India after studying at college, presumably one of the colleges of Oxford University, or Cambridge.

Pride goeth down/ Among thy seniors Pride is not welcomed. (Kipling originally used the word ‘side’, schoolboy slang for conceit.) Recruits to the I.C.S. were not expected to boast of their abilities; ‘goeth down’, means ‘badly received’.

the B.A. gown Undergraduates at Oxford and Cambridge wear simple black gowns. When they attain the degree of ‘Bachelor of Arts’ (B.A.) they are entitled to wear a more impressive gown, with a fur or satin hood, white for Cambridge, red for Oxford.

And on the card the magic letters stand The young man would have the letters I.C.S. (Indian Civil Service) on his visiting-card.

Papa had lived before him His father had been in the service, so his name would be remembered and recognised. See the opening lines of “The Tomb of his Ancestors” in The Day’s Work:

Some people will tell you that if there were but a single loaf of bread in all India it would be divided equally between the Plowdens, the Trevors, the Beadons, and the Rivett-Carnacs. That is only one way of saying that certain families serve India generation after generation, as dolphins follow in line across the open sea.

fellow-whelps fellow new recruits A whelp is a young dog, that knows nothing of the world, and has to be ‘licked into shape’.

sicken in the slough of Lower India in the quagmire of the service, the mass of rules and routines through which a new entrant would struggle at first, particularly burdensome in the unhealthy heat and dust of the Indian Plains. An echo of John Bunyan’s The Pilgrim’s Progress (1678) in which the Pilgrim flounders through the ‘Slough of Despond’.

to the Mountain’s brow Because he bore his father’s name Clare was ‘fast-tracked’ to a post in the hills, presumably in the central administration in Simla, the hill station which was the seat of the Government of India in the hot season.

no fairyland is Capua
Andrew Rutherford notes (p. 342) that ‘Capua’ – the ancient Roman city famous for wealth and luxury – was a nickname for Simla; though Clare did not find it a place of delight.

St Vincent licked the stamp and signed the letter He did the necessary routine jobs in the office. 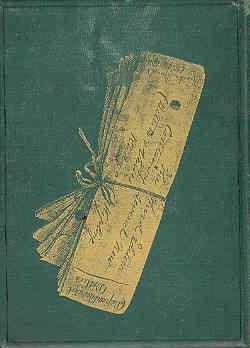 that foul frail red tape In Goverment offices documents were filed in bundles secured by pink tape, as pictured on the covers of later editions of Departmental Ditties.

Ever since those times ‘Red Tape’ has been a synonym for cumbersome bureaucracy.

prospered greatly and forgat his father Clare forgot the example of his respected father. This might conceivably be an echo from “The Ascension of Isaiah”, one of the Pseudepigraphs which the young Kipling might have encountered:

It came to pass after the death of Hezekiah that Manasseh reigned, who forgat his father’s precepts…

See The Internet Archive. We are cautious about this reference, but Kipling certainly had an extensive knowledge of the Bible, Apocryphal or otherwise.

a rather Conceited prig A prig is a narrow-minded self-righteous didactic person, convinced of his own correctness. with a tendency to put others right.

Kipling must have remembered the line from school. He might well have had to write it out many times as an ‘impot’, a punishment for misdeeds, like those of his readers who had enjoyed a Classical education

He is a c-d He is a cad. A cad was no gentleman, lacking good manners and behaving badly to others. The word is occasionally still used, though it has lost some of the force it had in Victorian times, when good manners were particularly highly valued.

See “A Friend’s Friend” in Plain Tales from the Hills which describes the violent punishment meted out to a young man who had badly misbehaved himself at a ball.

the fiat went forth fiat is Latin for ‘let it be done’, meaning a decree or rule. Here it presumably implies that the order for Clare’s downward transfer was made.

Cast out … he sought the plains Clare was evidently transferred to a less prestigious and much more uncomfortable post down on the plains of India, sweltering hot in the summer-time. 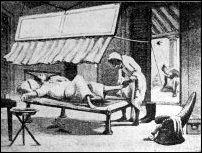 as the punkah flickers o’er him punkahs were large swinging fans, formed of cloth stretched on a rectangular frame and suspended from the ceiling.

They were activated by the pullers (punkah wallahs) to agitate the air in rooms, to help sweating sahibs sleep on hot Indian nights, or indeed work during the day.