An old Sussex woman leaves her dark grave to see how the hopping is going and how her relations and neighbours are getting on. She is delighted to see that both people and crops are doing well, but as dusk falls and everyone goes home, she realises she has nowhere to go, and returns to her rest in the graveyard.

In his Kipling’s Sussex, Michael Smith refers to the purchase of Bateman’s where, among the out-buildings, there are oast-houses, evidence that the area was once dedicated to the growth of hops for the making of beer. However, Rudyard quickly abandoned hop production on his own land and expanded his ownership in the farms around so that no neighbours could disrupt their new-found peace.

“Old Mother Laidinwool”. The Burial in Woollen Acts of 1666-80 in the time of Charles II laid down that the dead should be buried in shrouds made from pure English wool with a fine for non-compliance. Plague victims and those who could not afford a shroud were buried naked. This legislation remained in force until 1814.

Sheep are still farmed in Sussex, so Kipling may well have heard of the tale of the old woman who rose from the dead from old people in the neighbourhood, or from Sussex Folk and Sussex Ways (1892), by the Rev. Coker Egerton. With his usual happy knack of making something entertaining out of very little, he produced these affectionate and amusing verses.

In Rudyard Kipling’s World, R. Thurston Hopkins notes (p. 117) that many of Kipling’s poems reflect his surroundings at Burwash, deep in the Sussex countryside:

… “Old Mother Laidinwool” is only truly graphic to those who know and understand local traditions. The title of the poem revives the memory of the Downland sheep and the woollen manufacture. In Sussex Folk and Sussex Ways … we read:

About this time I find several instances of entries stating that such-and-such a person was buried in linen, or without a certificate, and that the fine was inflicted according to law.

Hopkins suggests that Kipling was inspired by a note in Egerton’s book quoting an old song that began:

Old Mother Nincompoop had nigh twelve month been dead –
She heard the hops were pretty good, and just popped out her head. (The rest is lost)

(‘Nincompoop’ is an unpleasant word signifying a booby or simpleton. Ed.)

(Enlarged from Old Song) This refers to“Dymchurch Flit” in Puck of Pook’s Hill, which is set in the oast-house at Bateman’s or near it, where the hops are drying. This is how the story opens:

Just at dusk, a soft September rain began to fall on the hop-pickers. The mothers wheeled the bouncing perambulators out of the gardens; bins were put away, and tally-books made up. The young couples strolled home, two to each umbrella, and the single men walked behind them laughing. Dan and Una, who had been picking after their lessons, marched off to roast potatoes at the oast-house, where old Hobden, with Blue-eyed Bess, his lurcher dog, lived all the month through, drying the hops.

They settled themselves, as usual, on the sack-strewn cot in front of the fires, and, when Hobden drew up the shutter, stared, as usual, at the flameless bed of coals spouting its heat up the dark well of the old-fashioned roundel…

Puck, in the guise of Tom Shoesmith, begins to sing the “Old Song” until interrupted by Hobden, who says :

“Well, well ! They do say hoppin’ll draw the very deadest, and now I belieft ’em. You, Tom? Tom Shoesmith !”

See also Something of Myself, Chapter 7, ‘The Very-Own House.’ Hobden appears in several of the Puck stories and “The Land” representing the unchanging nature of the Sussex countryside, and perhaps the source of this poem. 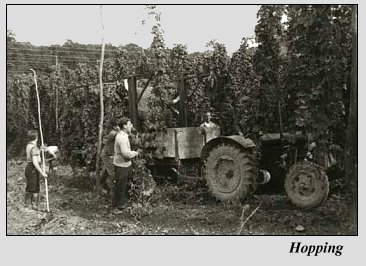 hops the female flower-heads of Humulus lupulus, family Cannabiaceae, a vigourous climbing plant, harvested in the late summer. Hops are an important ingredient in the brewing of beer, providing its characteristic bitter flavour.

The crop is grown on strings supported by poles and, until mechanisation, demanded a vast army of pickers

foreigners whole families came down from the east end of London to pick hops in Kent, Sussex and Surrey, camping in sheds provided by the farmers.
They would be regarded as “foreigners” by the locals, as would people from near-by villages. In this case, however, all the pickers are local. This video shows hop-picking in Kent, the neighbouring county, in 1929,

babies babies and very small children would be kept in the shade neaby with someone to look sfter them, older children would assist with the picking.

churchyard-mould The rich soil in a churchyard.