This story was first published in the Strand Magazine of September 1906, and McClure’s Magazine for the same month. It was collected in Puck of Pook’s Hill in 1906 and in numerous subsequent editions of that collection. It was accompanied by the poems “The Bee Boy’s Song” and “A Three-part Song” .

The story is set in the strange uncanny landscape of Romney Marsh, on the borders of Kent and Sussex. Puck – in the guise of Tom Shoesmith, a long-dead friend of Ralph Hobden – tells how the ‘people of the hills’ flitted out of England In the 1530s. They were much troubled by the cruelty and suffering caused by the religious conflicts of the day, and decided they would have to go. They crowded onto the Marsh, on the edge of England, and the air was full of their discontents. They called on the Widow Whitgift to help them, and lend them her two sons to carry them over the sea. They did so, and since one was blind, and the other dumb. they could tell nothing of what they had seen.

The germ of the story can be located in “Farewell Rewards and Fairies” already quoted in “Weland’s Sword”. J.M.S. Tompkins (p. 226) suggests points of contact with Walter Besant’s Titania’s Farewell, and “The Elfin-Grove” in Grimm’s Tales.

[“The Bee Boy’s Song” ] Kipling was an enthusiastic beekeeper. See “The Mother Hive”.

[Title] Dymchurch Flit A ‘flit’ was traditionally a surreptitious removal of oneself, one’s family and belongings from one’s lodgings – usually because the rent is due and one cannot pay. Here the People of the Hills were quietly leaving Old England, leaving not a thing behind, with no evidence of their passing. [A.W.]

[Page 257, line 2] hop-pickers Hops were, and are, used for flavouring bitter beer. In England at the time Kipling wrote this story they were grown not only in Kent and East Sussex, but also in Herefordshire and Worcestershire They were dried in Oast Houses, like the one at Bateman’s, as described in this story. (Kipling took John and Elsie to see hops being roasted in their own oasts in September 1902, very soon after the family had moved to Bateman’s.) It is sad to say that most of the hops used for brewing in England today come from Europe, Germany in particular. The hop-pickers came from East London, and a fortnight’s ‘oppin’ was the only holiday (and fresh air) that many workers got. The hopping was a family affair – all generations took part. [A.W.] See also “The Wish House” , Debits and Credits p. 127 line 28. 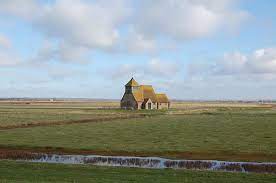 Romney Marsh is an ancient wet-land in the south east corner of England, low-lying behind a high sea-wall. It had many villages in the middle ages, but lost many of its people to the Black Death some seven hundred years ago, leaving only their churches behind in an empty haunted landscape.

The Marsh is close to Rye, where Kipling often called on Henry James, and it clearly made a strong impression on him. [J.R.]

‘Romney Marsh, where the roads wind like streams through pasture and the sky is always three-quarters of the landscape. The sounds I associate with Romney Marsh are the bleating of sheep and the whistle of the sea wind in old willow trees.’ :

[Page 263, line 26] cut away a little piece It was ‘lucky’ to throw a piece of potato out the door for the fairies.

[Page 263, line 31] nigromancin’ magic, specifically dealings with the dead as a means of divination.

[Page 264, line 11] Pharisees fairies; the word is formed by the reduplicated plural, characteristic of Sussex dialect. 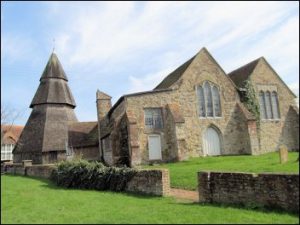 [Page 265, line 24] steeples settin’ beside churches  Brookland Church (right) , five miles north-east of Rye, has a steeple which `stands separately on the ground beside the church’.

[Page 266, line 3] witch yarn yarn tangled up, supposedly by the influence of witches.

[Page 267, line 6] Queen Bess’s father Henry VIII, under whom the break with the Catholic Church and the despoliation of the monasteries, with much destruction of religious images, took place in the 1530s. A cluster of Acts of Parliament, culminating in the 1534 Act of Supremacy, provided the legal undergirding for these revolutionary events.

[Page 268, line 15] Canterbury Bells ringin’ to Bulverhithe the bells would ring to signal the death, at the stake, of a heretic. Bulverhithe, between Bexhill and St Leonards, is mentioned as a port in 1500. By the end of the seventeenth century most of it had been washed away by the sea.

[Page 268, line 16] cruel Canterbury Bells Kipling is referring here to the religious conflicts that followed England’s break with the Roman Catholic Church, under Henry VIII (1509-1547) in the early 1530s. Acceptance of the changes in church doctrine and practice that followed became a test of political loyalty, and the monasteries were dissolved in an atmosphere of considerable turmoil. When Mary I, Henry’s daughter, came to the throne (1553-1558), she restored Catholicism, and a number of churchmen and common people were burned at the stake as ‘heretics’ – people who held false doctrines.

[Page 269, line 28] the Plague Bubonic plague, spread by rats, was endemic in Europe throughout the Middle Ages and into the seventeenth century, and much feared. In the fourteenth century it killed a third of the people of Europe, and was known as the Black Death.

[Page 270, line 19] This woman was a Seeker the Seekers were one of the radical Puritan sects of the seventeenth century.

[Page 275, line 32] as Ellen came Ellen was a real person, parlourmaid at Bateman’s, who served the Kiplings for eleven years, as recorded in Carrie Kipling’s diaries on 6 June 1914. [A.W.]