There are a number of musical settings of the poem; See Brian Mattinson’s “Kipling and Music” and David Alan Richards, pp. 214 & 697.

Peter Bellamy’s rendition is to be found  here.

These verses, telling of the arrival of Spring on 14 April. are written in the manner of an old English ballad of the Sussex countryside. See Michael Smith’s Kipling’s Sussex (p. 87).

See also Kipling’s poem “Old Mother Laidinwool” which tells of another old Sussex woman, twelve months dead, who leaves her grave to see and bless the people she loves. But as dusk falls, she has nowhere to go, and returns to her rest in the churchyard.
Kipling and Sussex

Kipling’s love of the beautiful counties of East and West Sussex is reflected in his motoring stories which extend into Hampshire to the West and Kent to the East, and include “They” and “Steam Tactics” (Traffics and Discoveries), “A Tour of Inspection” (Sussex Edition), and “The Village that Voted the Earth was Flat” (A Diversity of Creatures).

See also two other stories in A Diversity of Creatures, “Friendly Brook” , and “My Son’s Wife”, and “The Wish House” in Debits and Credits.

Stories of Sussex and its people through the ages are told in Puck of Pook’s Hill and Rewards and Fairies. See also ‘Sussex’ in Themes in Kipling’s Works”, under ‘Settings’.

In Something of Myself, Chapter 7, “The Very-Own House”, Kipling tells of his acquisition in 1902 of Bateman’s, deep in the Sussex Weald (see Angus Wilson p.260), and the installation of a dyname driven by a turbine in his own mill-stream, which produced the story “Below the Mill Dam” (Traffics and Discoveries).

He probably heard the story of Heffle Cuckoo Fair from one of the local country people like Hobden, the principal character in “The Land” and a rich source of wisdom and Sussex lore. 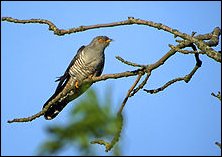 Cuckoo a bird of the large family Cuculidae has for centuries captured the imagination of English country people, through its characteristic call, and its curious nesting habits. The female lays a single egg in the nest of another insect-eating bird; the resulting cuckoo chick ejects other eggs and chicks from the nest, and is reared by the unwitting foster-parents.

The common cuckoo is a migrant, spending only the Spring and Summer in England, and wintering in Africa. Its arrival has traditionally been seen as marking the beginning of Spring. As an old rhyme in Middle English sings:

Heathfield a pleasant village in East Sussex, near the junction of the A265 and the A267, some sixteen miles (26 km) from Tunbridge Wells and Eastbourne. ‘Heffle’ is an old local name for Heathfield.

The Heffle Cuckoo Fair at which the Old Lady releases a cuckoo to mark the first day of Spring, was first held in Heathfield in 1315, and is still held annually in April. (There follows the Heathfield Show in May, the Carnival in the summer, and a French market on the Bank Holiday weekend at the end of August.)

locked-up trees There would still be no leaves in April – perhaps the first signs of buds.

Warrant, Act and Summons in this context a Warrant authorises an arrest or the carrying out of a Judgement; an Act is an Act of Parliament which establishes a law; a Summons is an order to appear before a court. Three weighty legal procedures purporting to authorise the official arrival of Spring.

Whitsuntide also known as Pentecost, the feast in the Christian year commemorating the descent of the Holy Spirit upon the disciples after the Resurrection of Jesus. Whitsun is celebrated fifty days after Easter Sunday. See Acts 2,1-6.

This verse implies a message to the young. Make the most of life while you can, because, you will one day perish, as in Shakespeare’s lines from “Cymbeline” (Act 4, Scene 2):

Golden lads and girls all must,
Like chimney-sweepers, come to dust.