First published in the Monthly Review for September 1902 collected in Traffics and Discoveries (1904) where it is preceded by the verse “Our Fathers Also”, The Sussex Edition, Volume 7, page 375, the Burwash Edition, Volume 7 and Scribner’s Edition, Volume 22, page 411.

At first sight, this is a charming story about Sussex in ancient times, like those in the Puck stories, – see, in particular, the notes on “Young Men at the Manor” – and others. In the ancient Mill the Cat and the Rat discuss various matters that concern them after the fashion of “The Ship that Found Herself” (The Day’s Work) A close examination will show, however, that it is a political parable like the “The Mother Hive” (Actions and Reactions), in which Kipling is inveighing against those who resist the need for change, fail to understand the possibilities of new technology, deny the existence of enmity and danger, and generally take a complacent and relaxed view of life.

Many, however, will not see any particular message except Kipling’s usual dictum that the work is the thing and enjoy the story (which is mainly self-explanatory) for its own sake.

In Something of Myself Chapter VII (‘The Very-Own House’), Kipling writes

The House was not of a type to present to servants by lamp or candle-light. Hence electricity, which in 1902 was a serious affair. We chanced, at a week-end visit, to meet Sir William Willcocks, who had designed the Assouan Dam—a trifling affair on the Nile. 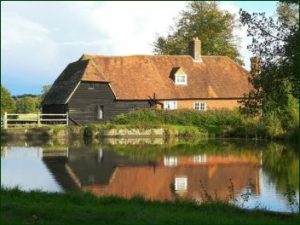 Not to be over-crowed, we told him of our project for declutching the water-wheel from an ancient mill at the end of our garden, and using its microscopical mill-pond to run a turbine. That was enough! ‘Dam?’ said he. ‘You don’t know anything about dams or turbines. I’ll come and look.’ That Monday morn he came with us, explored the brook and the mill-sluit, and foretold truly the exact amount of horse-power that we should get out of our turbine—‘Four and a half and no more.’ But he called me Egyptian names for the state of my brook, which, till then, I had deemed picturesque. ‘It’s all messed up with trees and bushes. Cut ’em down and slope the banks to one in three.’ ‘Lend me a couple of Fellahîn Battalions and I’ll begin,’ I said.

He said also; ‘Don’t run your light cable on poles. Bury it.’ So we got a deep-sea cable which had failed under test at twelve hundred volts—our voltage being one hundred and ten—and laid him in a trench from the Mill to the house, a full furlong, where he worked for a quarter of a century. 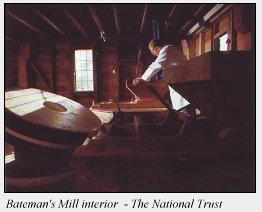 The mill at Bateman’s is in good order today (2007), and you can buy flour that has been ground there, a hundred years after Kipling wrote this story, and nine hundred and twenty years after the Domesday Survey. See also the Sussex volumes of The Victoria County History of England and Michael Smith’s ““Kipling’s Sussex” on this site.
Charles Carrington tells (p. 377) how:

Kipling’s medieval studies led him to Domesday Book, and the first product of his invention after the removal to Batemsn’s was …. an amusing piece of satire told to the accompaniment of the mill-wheel grinding out extracts from the Sussex Domesday.

Andrew Lycett (p. 348, passim) explains the political implications of he unlikely alliance between the cat and the rat.
Angus Wilson (p. 232) confirms the view that this is:

… a political fable expressing Kipling’s alarm and dismay at England’s inability to address herself socially, imperially, culturally and technologically to the future. It embodies his antipathy to the traditional élitist, conservative but, at the same time, laissez-faire cultural and political outlook of Balfour’s country-house world. 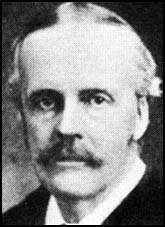 Arthur Balfour (1848-1930) the first Earl Balfour (right), was Conservative Prime-Minister from 1902 to 1905, just when this story was written. Kipling was strongly critical of his supine policies, and this is also reflected in his verse – particularly “Song of the Old Guard”. Angus Wilson considers “Below the Mill Dam” at some length, observing that political fables and satires do not often appeal to later generations, unaware of what inspired them
Gilmour (pp.181-2) maintains that the cat is Balfour himself.

Balfour’s characteristics are brilliantly reflected in the cat’s elegance and languor, her innate conservatism that fears change and ‘damnable inventions’, her reverence for the past, her defences of privilege and her enjoyment of the ‘dim delicious half-tones’ of Life. A single sentence from the cat encapsulates the manner:
‘Your assumptions are deliciously sweeping, but may I point out that a decent – and the dear old Abbot of Wilton would have put it in his resonant monkish Latin much better than I can – a scholarly reserve does not necessarily connote blank vacuity of mind on all subjects’.
[Traffics and Discoveries, page 386 line 16]

At the General Election in 1905 the Conservatives were defeated by the Liberals, who to Kipling were even more objectionable.