This story was first published in the Strand Magazine of February 1906, and the Ladies’ Home Journal for the same month. It was collected in Puck of Pook’s Hill in 1906 and in numerous subsequent editions of that collection. It was accompanied by the poem “Sir Richard’s Song”.

There are numerous paperback editions of Puck of Pook’s Hill including the annotated Oxford World Classics edition. Also a Kindle edition available from Amazon.

The children meet Sir Richard Dalyngridge, a Norman knight and a close friend of Hugh the Saxon, who figured in the first tale. Their friendship, as Normans and Saxons make peace with one another after the Norman Conquest, is the main theme of this and the two tales that follow. Richard had come to England in William the Conqueror’s army and he and Hugh had fought on opposite sides in the Battle, of Hastings. In the confusion that follows the Saxon defeat, they meet and fight, not recognising one another in their armour. Hugh’s sword flies from his hand, and he surrenders; but when a group of Saxons rush up and threaten to kill Richard, Hugh tells them Richard is his prisoner, and takes him back to his Manor Hall,

Soon after, Richard’s Lord, de Aquila, rides up with his soldiers, and gives the Manor to him – if he can hold it. He is able to do so through his friendship with Hugh, which enables him to bring Norman soldiers and the local Saxons together to defend the valley against all comers. Hugh has hung up his sword, saying that it is rightly Richard’s. When de Aquila returns three months later, all is secure, and he confirms Richard as the Lord of the Manor. He is well aware of the help he has had from Hugh, and makes Hugh Lord of the neighbouring manor up the hill; Hugh buckles on his sword again, and swears allegiance to de Aquila.

For historical material in his Norman stories Kipling drew on Freeman’s History of the Norman Conquest (1867-79), on Domesday Book, and on the Sussex Archaeological Collections. Volume vi of the latter has an article on the Battle of Hastings (pages 15-40) and lists the De Aquila family in a later piece (129-30). Both mention the death of Engerran or Engenulf de Aquila at Hastings (27 and 130). Historically, the Gilbert de Aquila who was made lord of Pevensey was his grandson, not his son.

For some discussion of Kipling’s use of historical material in the Norman stories, see C. W. Scott-Giles, `Historical Background of Some “Puck” Stories’, in KJ 138 (June 1961), pages 15–21 (reprinted in ORG vi. 2698-2706). For the theme of union between Saxon and Norman one might compare the poems “The Anvil” and “Norman and Saxon” written for C. R. L. Fletcher’s School History of England (1911).

[Page 36, line 20] girths belt of leather or cloth drawn tight round the body of a horse to secure the saddle.

[Page 36, line 22] crupper leather strap buckled to the saddle and passing under the horse’s tail to prevent the saddle from slipping
forward. 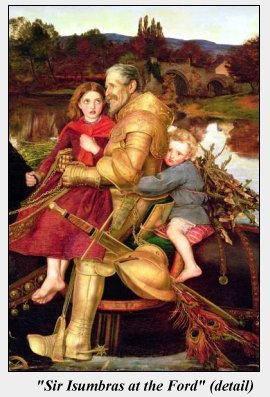 [Page 37, line 32] William the Conqueror William, Duke of Normandy, claimed the English throne on the death of Edward the Confessor in 1054. In 1066 he landed his army across the Pevensey Levels, and defeated the English forces, led by King Harold, at the ‘Battle of Hastings.’

He established a Norman dynasty on the English throne, and parcelled out the lands of England among his barons. The bulk of the population, though, remained Saxon.

[Page 38, line 28] Runic letters the letters of an incised angular script used among the Germanic peoples. They have early associations with magic which survive into e.g. some of the Norse sagas. As the context indicates, such associations are present here.

[Page 39, line 19] Earl of Mortain Herleva, concubine of Duke Robert of Normandy and mother of William the Conqueror, was given in marriage to the Norman nobleman Herluin of Conteville. Robert of Mortain was their second son. After the Norman Conquest, `his possessions in England were larger than those of any other follower of William’ (Freeman, iv. 764). See also the notes to Old Men at Pevensey”.

[Page 41, line 2] Bec Monastery founded c.1039 by Herluin, a Norman knight who had turned to the monastic life. Under the Italians Lanfranc and Anselm its school became one of the leading intellectual centres of Western Europe.

[Page 50, line 8] Custom of the Manor Saxon law was based heavily on custom and precedent, handed down largely by word of mouth. This was in contrast to French law, which was more formally condified and based on Roman law. The liberty of English peasants to appeal to the ‘Custom of the Manor’ would have been a novelty to a Norman knight.

[Page 50, line 8] Manor In mediaeval times the Manor, roughly corresponding to a village, was the smallest unit of government, ruled by a knight. The knight, the ‘Lord of the Manor’, held his lands from a more powerful ‘Lord’, paid him annually a ‘fee’ (in effect a tax) in the form of produce, and contributed an agreed number of armed men when they were needed, as they often were. [see also the note to page 53 line 33 below]

[Page 53, line 33] Knight’s fee under the feudal system, a knight did not own his land; he held it as the vassal of a superior lord on condition of providing, when required, military and other service (as the text indicates). See also the note below to “Sir Richard’s Song”.