[Page 369 line 1] Domesday Book the great survey of England carried out on the orders of William the Conqueror in 1086 – see ORG Volume 4, p. 1932 for interesting background. 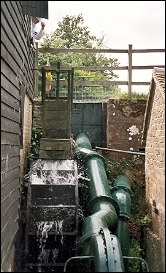 [Page 369 line 3] Robert’s Mill there is a mill on the River Rother at Robertsbridge some four miles from Burwash. Kipling installed the turbine, generator and associated equipment in the watermill in his own garden (right).

[Page 369 line 6] Nun-nun-nunquam geldavit The Mill is stammering as it rattles along. The word is numquam, Latin for ‘never’; the

translates the phrase in this context as meaning ‘never paid tax since the Conquest’ (1066).

[Page 369 line 8] cottars tenants who occupied cottages and land in return for labour.

one plough important equipment in an agricultural economy, recorded in Domesday Book.

wood for six hogs pannage – the right to graze pigs in the forest.

[Page 369 line 19] the brown variety the common Norwegian or Wharf Rat – Rattus norvegicus. It is not known why it is so named as it did not originate in Norway, but John Berkenhout, the author of Outlines of the Natural History of Great Britain (1769), is most likely responsible.

[Page 369 line 21] ‘Appreciation is the surest sign of inadequecy’ an aphorism we have not traced – information would be appreciated: Ed,

[Page 370 line 2] thuttered a portmanteau word probsbly compiled from ‘thundered’ and ‘spluttered’ . However, the Oxford English Dictionary calls it ‘echoic of twitter and stutter’, and attributes it to Kipling’s Captains Courageous (page 14 line 7). It is also used by Kipling in “Simple Simon” in Rewards and Fairies page 281 line 10. It is unlikely to be a Sussex word, since it is not to be found in Parish’s Dictionary of the Sussex Dialect.

grist in this context corn for grinding into flour

[Page 370 line 11] rape in this context a former administrative district of Sussex.

[Page 370 line 12] In Firle tenuit Abbatia de Wiltuna unam hidam et unum virgam et dimidam . Numquam geldavit. This might translate as ‘In Firle the Abbey of Wilton holds one hide and one virgate and one half of a virgate. It has never paid tax since the Conquest.’ Firle, near Lewes, was owned by the Abbey of Wilton – a Nunnery near Salisbury. (See page 372 line 22 below) We have not found this entry in Domesday Book.

[Page 371 lines 22-23] “caught no mice” … the grammar sticking in my throat We are not given the whole remark so cannot really comment on the grammar.

[Page 371 line 28] a riposte Italian riposta – a reply, used in fencing for a counter-thrust.

[Page 372 line 15] four-and-twenty leaders of revolt in Faenza the Papal Legate speaks, from “A Soul’s Tragedy” a drama by Robert Browning (1812-1899). [Kipling had read Browing since his schooldays. See his “If -“ the theme and metre of which echo Browning’s “Epilogue.” (Norman Page, p. 178) and a Browning parody “The Beginner”.]

[Page 372 line 22] The Abbott of Wilton a Benedictine convent in Wiltshire, three miles from Salisbury, founded as a college of secular priests by Earl Wulstan of Wiltshire, in about 773. After his death in 800 his widow, St. Alburga, sister of King Egbert, turned it into a convent for twelve nuns.

[Page 372 line 27] William de Warrenne First Earl of Surrey (died 1088), one of the Normans who fought at the Battle of Hastings and became landowners in England. One of Duke William’s advisers when the decision to invade England was being considered, he afterwards received the Rape of Lewes in Sussex together with lands in twelve other shires. He is mentioned in Kipling’s poem “The Land”.

[Page 372 line 31 onwards] the Abbott’s brother etc this is all nonsense but makes such a good story that it would be small-minded to object!

[Page 373 line 5] the woman the Abbott kept again most unlikely historically, but see “The Eye of Allah” (Debits and Credits) for non -celibate monks.

[Page 373 line 8] Modo per omnia… ORG regards this as untranslatable and seems to suspect it is Kipling’s own.

[Page 373 line 16] buckets in this context the cavities on the perimeter which receive the water, the weight of which turns the wheel.

[Page 373 line 24] hatches in this context the gates or sluices which control the flow of water from the dam to the wheel; see page 374 lines 19 onwards.

[Page 373 line 32] the Ace of Diamonds the wheel had been knocked out of shape.

[Page 374 line 28] dam in this context the bank of earth and stone which retains the water in the mill-pond to drive the mill.

[Page 374 line 33] Raven’s Gill Gill is an old word for ‘ravine’, usually spelt ghyll but we have not traced this one.

[Page 375 line 7] Harpenden Brook there is a Harpington Manor near Newhaven on the Sussex coast near Lewes.

[Page 375 line 8] Callton Rise not traced, like the other items below.

[Page 376 line 4] porter-coloured in this context porter is a dark-brown bitter beer not as strong as stout.

[Page 376 line 14] Earl Godwin The Earl of Essex (1001-1053), and one of the most powerful men in Saxon England. His son, Harold Godwinson, born c. 1022, was the last crowned Anglo-Saxon King of England. He ruled from January 5 to October 14, 1066 when he was killed at the Battle of Hastings. “The Tree of Justice” (Rewards and Fairies) is based on the legend that he survived for many years, as an old witless pilgrim.

[Page 376 line 26] the Upper and the Nether Millstones an echo of Deuteronomy 24, 6: ‘No man shall take the nether or the upper millstone to pledge for he taketh a man’s life to pledge.’ Nether means ‘lower’.

[Page 377 line 25] Maiden’s- tongue and hart’s hair the author has – by accident or design – transposed the names, which should be maidenhair and hart’s-tongue, the former is Adaintum Capillus-Veneris, the latter a member of the genus of ferns called Scolopendrium.

[Page 378 line 13] One of your people died… ‘Curiosity killed the cat’ is a proverb used to warn against being too inquisitive and attributed to Ben Jonson and Shakespeare.

catholic in this context, ‘of universal interest’ – ‘of wide sympathies’.

[Page 380 line 3] a machine-moulded pinion a small cog-wheel which engages with other gears.

[Page 380 line 5] pinions this is a play on words – pinions in this context being a poetic form of ‘wings’.

[Page 380 line 29 to page 381 line 15] Let me see if I can tabulate it… as explained in the text, this is a remarkable attempt to describe a hydro-electric domestic lighting system.

[Page 381 line 5] Felden the Kiplings had a neighbour, Colonel Feilden (Charles Carrington p. 411). One wonders if this is he with a slightly altered name.

[Page 382 line 18] ululated By accident or design Kipling has confused this word, meaning ‘howled’, with pullulated – ‘teeming with’, and so ‘infested’ or ‘full of.’

[Page 382 line 23] a hornet a large insect of the wasp family – Vespa crabro – with a serious sting.

[Page 383 line 21] eight-candle lights the unit of luminosity at that time was based on a standard candle – here each light would be the equivalent of eight such candles.

[Page 384 line 7] squat-right In common law, adverse possession is the process by which title to another’s real property is acquired without compensation, by, as the name suggests, holding the property in a manner that conflicts with the true owner’s rights for a specified period of time.

[Page 384 line 12] unum hidam – a large potato patch Latin – ‘one hide’; a measure of land which varies from county to county. This is a mock entry. as the potato did not arrive in England until the mid-16th Century.

[Page 384 line 19] Nonconformists those who left the Church of England after 1662 as they would not conform to certain practices.

[Page 384 line 21] Congregational a form of church government whereby each congregation manages its own affairs.

[Page 385 line 15] If you thought a trifle more about the work Kipling is making his usual point again.

[Page 385 line 33] the tituration of farinacious substances an elaborate way of referring to ‘the grinding of corn’.

[Page 387 line 10] a big box of tanks the electrical accumulator – glass vessels containing acid which stored electricity when the dynamo was not working. See Page 387 line 10 below.

[Page 389 line 13] overshot wheel the water is supplied from a trough above the wheel.

[Page 390 line 14] pincing on her toes perhaps another portmanteau-word from prancing and mincing. The Oxford English Dictionary has ‘pince’ as a variant of ‘pinch’. It is not to be found in Parish’s Dictionary of the Sussex Dialect.

[Page 391 line 18] cow-stables usually called cowsheds but Kipling uses an Americanism he must have picked up in Vermont, together with his technical railway terms, from farmers and from the station-master at Brattlebro’ He uses it again in “A Centurian of the Thirtieth” (Puck of Pook’s Hill, page 147 line 9).

[Page 393 line 8] Pasht the Egyptian Cat Goddess known to the Greeks as ‘Bubastis’.

the Old Gods in Egypt, the cat was sacred. The ancient Romans regarded the animal as the symbol of liberty.