These various verses are hand written by Kipling and are among the Kipling Papers in the Library of Congress in Washington D.C. They were not collected by him, but are to be found in Rutherford (p. 457) and Pinney, vol. 3.

The first three seem to have been written on board the City of Peking on which Kipling and the Hills sailed from Yokohama to San Francisco in May 1889. The second three also seem to date from early 1889, though (e) may have been earlier.
The verses

(a) Edmonia Hill was Kipling’s closest confidant at this time, and it seems likely that this was written for her, reflecting her delight at the striking seascapes around her in the North Pacific.

(b) Perhaps this was written of a chance female acquaintance who had bettered Kipling at Euchre. However, he persevered and later recorded a successful session on his way across the Atlantic in the City of Berlin.

(c) This must have been written of Edmonia, whose family home was in Beaver Pennsylvania. 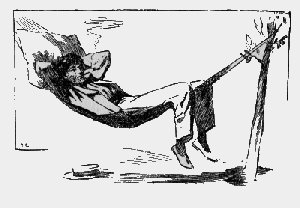 (d) Pinney dates this to July/August 1889 where Kipling stayed with Mrs Hill and her family in the dormitory in Beaver College. He notes that on the reverse of the MS there is a drawing of a smoker on a sofa with his head in a cloud of smoke, captioned

‘Il dolce far niente (the sweetness of doing nothing) Now where the deuce and all DID I drop that cheroot-end.’

Kipling had been a dedicated smoker since his schooldays. See “Tobacco” and “The Maid of the Merschaum”.

(e) Pinney notes that this is written on the back of a prose version of “Imperious Wool-booted Sage” (probably written for October 1888). He suggests that this verse may refer to the accession of Wilhelm II as German Emperor, following the death of Frederick III in June 1888. Kipling was then in Simla, where he noted in a letter to Edmonia Hill on June 22nd that ‘the court “is in mourning” for the death of Frederick. (Pinney, Letters vol 1, p. 205).

(f) Pinney notes that the MS is among those associated with Edmonia Hill. Rutherford suggests a date in early 1889, and Pinney takes the view that it would not have been written later than this. It has an echo of some of the poems Kipling wrote to Flo Garrard as a schoolboy seven years before.

Euchre a fashionable and competitive card game of the day, played by two or four people, not unlike Bridge.

Pillar of Cloud In The Old Testament, when the Lord led Israel out of Egypt he went before them by day in a pillar of a cloud. Exodus 13.21.