Published in the United Services College Chronicle no. 4, 30 June 1881. The poem was never collected by Kipling, but is to be found in Andrew Rutherford (p. 63), and Thomas Pinney p. 1575.

In the school corridor, the poet meets a new boy who looks pale and ill. He hopes that this indicates a fellow aesthete. The “Disappointment” of the title comes when he learns that the boy only had too much to eat in the school tuck-shop.

Rutherford (p. 63) notes that this poem may have been written in cooperation with L.C. Dunsterville [the original of “Stalky”], referencing Summary of the Work of Rudyard Kipling, L.H. Chandler, New York, 1930, p. 332.

Jan Montefiore points out that the form of the poem, a quatrain ballad about a well-meaning speaker being surprised by a child’s unexpected response, echoes William Wordsworth’s
“Anecdote for Fathers” and “We are Seven”.

Kipling was sent to United Services College at Westward Ho! in Devon in 1878, at the age of twelve. As he recounts in Stalky & Co. (1899) it was a hard life for a small boy, with a good deal of bullying, and beatings as punishments. During his first year, as was common, he was very miserable. Soon after, though, he got his strength, and made an alliance with two other boys (‘Turkey’ and ‘Stalky’ in Stalky & Co.) which assured security in the rough and tumble of a boy’s boarding school, where the weak often go to the wall.

In this poem Rudyard is making fun of himself for feeling sympathy for a new boy who looks unhappy, though he never forgot his own unhappiness at the hands of bullies. In “The Moral Reformers” in Stalky & Co. the three of them join forces to take brutal revenge on two bullies who have been persecuting a younger boy. 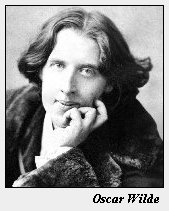 Aesthetic souls 1881 was the heyday of the “Aesthetic” movement, personified by Oscar Wilde, when poets and artists tried to show, in dress and appearance, that they were “different.” To look pale and sad might show that you were “intense” [line 4] – possessing intensity of feeling and appreciation of beauty.

Ricketts (p. 43) notes that the young Kipling’s serious poems about his love for ‘Flo’ Garrard were hidden in his notebooks, and never seen by the other boys:

What Rud’s schoolfellows did see were his parodies and light verse; which, together with his knowledgeable air, had by now gained him the reputation of school aesthete.

1881 was also the year in which Gilbert and Sullivan produced their comic opera “Patience” whose whole plot satirises the Aesthetic movement. If Stalky & Co. is a reliable witness, it took the College by storm. In “The United Idolaters” Mr. King recalled the “Patience” epidemic, and Stalky quotes from one of the songs: “If you’re anxious for to shine in the high aesthetic line.”

What ails thee An echo from the first line of “La Belle Dame sans Merci” by John Keats: ‘O what can ail thee, knight-at-arms, alone and palely loitering ?’

Keyte’s the school ‘tuck-shop’ at Westward Ho!, where boys could buy tea and buns and biscuits, was run by ex-Sergeant-Major Keyte, a former cavalryman. (Rutherford) .