This libretto, for passages for a light opera, was published in the Civil and Military Gazette of 21 November 1885, with the subheading “A farcical comedietta now running, with enormous success, in London “. There is no signature, nor is it in Kipling’s Scrapbooks of press cuttings at the University of Sussex, and indeed no firm evidence that it is by his hand. However it is closely similar in style to “Trial by Judge” published a few weeks before on 16 September, and well authenticated. Rutherford takes the view that this too is clearly by Kipling, and Pinney includes it in his Cambridge Edition of the poems.

In 1885 a number of the most important Indian Associations concerned with political reform decided to send three delegates to England, to bring Indian aspirations and grievances to the attention of the British public, in the run-up to the forthcoming General Election. One was selected from each of the Presidencies: Narayan Ganesh Chandavarkar, editor of a moderate Bombay newspaper and an attorney in Bombay High Court; Man Mohan Ghose, a well-known barrister and journalist from Calcutta; and S. Ramaswami Mudaliar, a wealthy landowner and attorney from Madras.

Their mission achieved little, partly, in Rutherford’s view, because of their error of judgment in aligning themselves openly with the Radical left of British politics. They were pilloried by the Conservatives as unrepresentative of the Indian public as a whole.

Kipling’s script is light-hearted in tone, but harsh and patronising in its effect. The delegates arrive in Britain, claiming to represent the teeming millions of India. They have been educated by the British, and have learned about our system of politics from liberal minded men like Bright and Blunt and Kaye. They want the right to govern their own land. The Great British Public are initially impressed, and proceed to investigate the justice of their claim.

The British find, on swift investigation, that there is no such thing as a united India. There are immense differences and conflicts between different Indian peoples, and many atrocious customs like caste exclusion and child-marriage and purdah which Indians will not abandon even if left to manage their own affairs. They would fight like wolves if the British withdrew. Furthermore, the delegates are refined educated men, who don’t speak for the horny-handed workers of India, the farmers. Like the legendary Tailors of Tooley Street they claim to speak for the people, but speak only for themselves.

Meanwhile Indians should reform their own customs, treat women properly, reform municipal corruption, see to their own drains, and then come back and talk to the British – who have worked their freedom out over the centuries – about self-government.

Twenty years before, on January 30th 1865, the Pioneer had published a leader which probably reflected the thinking of most Anglo-Indians at that time:

Asiatics are, and always have been, the least democratic of men; they care nothing for self government: they infinitely prefer being ruled by others; they must have some to look up to as rulers and guides. We can but partially occupy the place, separated as we are from them by race, religion and social customs, and it is important we should recognise the fact.The great mass of the population is exactly what it was three hundred years ago, neither richer nor poorer, neither wiser nor more foolish, while their leaders, their federal lords, the magnates of the land, would not be men if they did not cordially hate us – so completely have their importance and power been crushed down.
[quoted by Charles Allen, in Kipling Sahib]

By 1885 the views of most of Kipling’s Anglo-Indian readers, and indeed of Kipling’s own father, had probably changed little. In January 1889 Rudyard wrote an article for the Pioneer that was equally dismissive of Indian claims for political reform. See “A Study of the Congress” in KJ 381, p.55.

vina and sitar Indian musical instruments akin to the lyre and guitar. 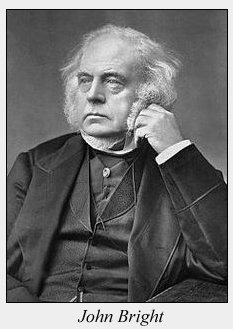 Kaye and Blunt and Bright John Bright (1811-89), the best known of the three, was a Radical orator and statesman. He sat in the House of Commons from 1843 to 1889, promoting free trade, electoral reform and religious freedom and saw himself as a spokesman for the middle class against the privileges of the landed aristocracy. Joseph Kaye (1823-78) was a liberal economist, and Wilfred Scawen Blunt (1840-1922) a politician, traveller, poet, and critic of British imperialism.

Mill and Kant John Stuart Mill (1806-73), one of the most influential British philosophers of the 19th century, utilitarian and liberal. Immanuel Kant (1724-1804) German idealist philosopher. 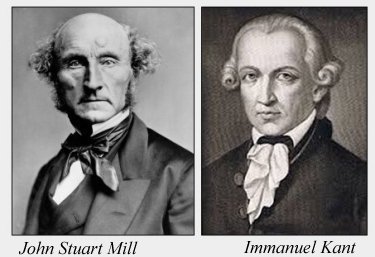 Babus and Pathans Babus were educated English-speaking Bengalis, and Pathans fierce tribesmen of the North-West Frontier. See “The Head of the District” (1890) for a view of their incompatibility; but also see Kim (1900) for adventures in which Mahbub Ali, the Pathan, and Hurree Chunder Mookerjee, the Bengali, work together in the service of British intelligence, both equally courageous, resourceful and worthy of respect. [The portraits of them below are illustrations in the form of terracotta bas reliefs, by Lockwood Kipling. 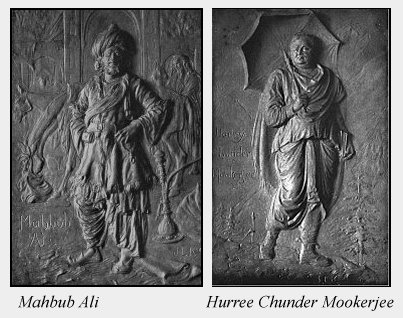 As he himself later insisted, Rudyard had “two sides to his head” which enabled him to hold several contradictory viewpoints at the same time. See “The Two-sided Man” on which he drew for the chapter heading to Chapter VIII of Kim.

Gurmukhi/Tamil/Bhils/Gonds/Punjabi/Marattha/Parsees/Assamese/Sindees some of the many peoples and subdivisions of India.

purdah the seclusion of women. ‘purdah’ means ‘curtain’ or ‘veil’.

babe-widowed wives Traditionally in India women had little independent status, and it was common for girls to be married by the age of ten or eleven. In old times, if a husband died, the widow had to be burned on his funeral pyre; though this practice was banned in 1829, it still continued in many parts of India. To this day widows in India’s towns and villages are often disowned and abandoned by their families. This was a matter of frequent comment in the Anglo-Indian press in Kipling’s day.

the Tailors of Tooley Street Prime Minister George Canning (1770-1827) once recalled that three tailors of Tooley Street, hard by London Bridge, had presented a petition of grievances to Parliament claiming to represent “We, the people of England”. The phrase has since been used to describe a pretentious minority who take upon themselves to speak for people whom they have no right to represent.

M.A.’s and LL.D.’s Masters of Arts, and Doctors of Laws, university graduates.